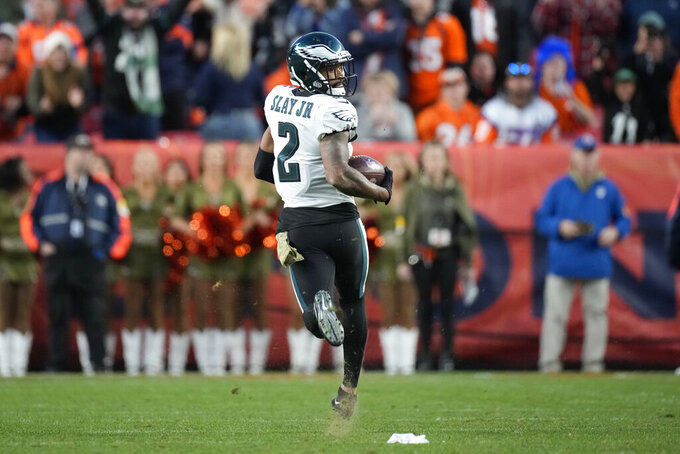 Rams at 49ers, 8:15 p.m. EST. Turns out the star-laden Rams needed Odell Beckham Jr. after all. With reliable receiver Robert Woods out for the season with a torn ACL, Beckham has a chance to make an immediate impact for coach Sean McVay and quarterback Matthew Stafford. The Rams signed Beckham this week after he was waived by the Cleveland Browns, and McVay hasn't said if or how much his new weapon will play against San Francisco. One thing LA (7-2) has in common with its in-state rival: Both teams are coming off tough losses. The 49ers (3-5) were soundly beaten by an Arizona team missing several stars. The Rams fell flat in a Sunday night loss to the Titans.

— Jonathan Taylor, Colts, had 21 rushes for 116 yards and a touchdown in Indianapolis' 23-17 win over Jacksonville.

— Dalvin Cook, Vikings, rushed for 94 yards and a touchdown in Minnesota's 27-20 win over the Los Angeles Chargers.

— Stefon Diggs, Bills, had eight catches for 162 yards and a touchdown in Buffalo's 45-17 win over the New York Jets. Gabriel Johnson, Bills, had 105 yards on just three catches.

— Darrel Williams, Chiefs, had nine receptions for 101 yards and a touchdown in Kansas City's win.

— Kendrick Bourne, Patriots, had 98 yards and a touchdown on four receptions in New England's 45-7 win over Cleveland.

— CeeDee Lamb, Cowboys, had six receptions for 94 yards and two touchdowns in Dallas' 43-3 win over Atlanta.

— Dorance Amstrong, Cowboys, blocked a punt that rookie Nahshon Wright recovered in the end zone in Dallas' 43-3 win over Atlanta.

— Punter Tommy Townsend, Chiefs, completed a 16-yard pass for a first down on a fake punt in Kansas City's 41-14 win over Las Vegas.

— Zane Gonzalez, Panthers, made field goals of 44, 48, 49 and 27 yards and connected on both extra points in Carolina's 34-10 win over the Arizona Cardinals, the team that released him in the offseason.

— Cornerback Darius Slay, Eagles, returned a fumble 83 yards for a touchdown in Philadelphia's 30-13 win over Denver.

— Kyle Dugger, Patriots, returned an interception 37 yards to set up a touchdown in New England's 45-7 win over Cleveland.

Panthers quarterback Cam Newton had his 43rd game with a passing and a rushing touchdown, extending his NFL record. ... The Dallas Cowboys had their highest-scoring quarter in franchise history (29 points in the second) and biggest halftime lead (36-3) since 1971, going on to beat the Atlanta Falcons 43-3. ... Cowboys CB Trevon Diggs made his eighth interception of the season, matching Jairus Byrd (2009) and Tim Jennings (2012) as the only players since 1990 with that many picks in their teams' first nine games. ... Jets backup QB Joe Flacco threw his first touchdown pass of the season and 225th of his career. ... Minnesota's Justin Jefferson had his 10th game with at least 100 receiving yards. Only Odell Beckham Jr. (15) has more in a player's first 25 games in the Super Bowl era. ... Indianapolis' Jonathan Taylor had his seventh straight game with at least 100 scrimmage yards and a touchdown, the fourth in league history to do so.

The Tennessee Titans' six-game winning streak is the longest in the NFL, and by beating the New Orleans Saints they became the second team in league history to win five straight games against teams that made the playoffs the prior year, joining the 2003 Philadelphia Eagles. ...The Colts' Jonathan Taylor is the de facto NFL rushing leader with Derrick Henry sidelined. Taylor rushed for 116 yards in Indianapolis' 23-17 win over Jacksonville, matching Henry at 937 yards on the season. ... The Saints had their eighth straight failed 2-point conversion over several seasons, and it was costly. A penalty pushed the attempt back to the 7-yard line and then Trevor Siemian threw incomplete, costing the Saints a chance to tie the game late in a 23-21 loss to Tennessee. ... Mac Jones became the first Patriots rookie with three or more TD passes in a game since Drew Bledsoe (four) in Week 18 of the 1993 season vs. Miami. ... The Jets became the first team to give up at least 45 points three times in a four-game span since the Giants in 1966, according to ESPN Stats & Info. New York has given up 1,890 yards in those games, the most in a four-game span in team history.

Washington defensive end Chase Young suffered a knee injury that coach Ron Rivera said was “potentially an ACL” in his team's 29-19 win over Tampa Bay. ... For the Buccaneers, cornerback Richard Sherman didn't play after he injured a calf during warmups. ... Green Bay Packers running back Aaron Jones hobbled off the field with a knee injury in the second half of a 17-0 win against Seattle. ... Star Steelers linebacker T.J. Watt left Pittsburgh's tie against Cleveland with hip and knee injuries. ... Pittsburgh guard Kevin Dotson (ankle), cornerback Joe Haden (foot) and guard Trai Turner (ankle) were also hurt. ... For the Lions, running back Jemar Jefferson (ankle) and safety Tracy Walker (concussion) were injured. ... New Orleans Saints receiver Ty Montgomery II left a loss to the Tennessee Titans early with an injured finger. ... Titans linebacker Bud Dupree left with an abdominal issue. ... Cleveland Browns quarterback Baker Mayfield suffered a bruised knee in a loss to New England but said he would play next week. ... Browns cornerback Troy Hill was taken off the field on a stretcher and was taken to a hospital. The Browns said he had movement in his extremities. ... Browns receiver Anthony Schwartz and cornerback A.J. Green suffered concussions. ... New York Jets rookie cornerback Brandin Echols injured a thigh against the Bills. ... Starting in place of the injured Kyler Murray, Cardinals quarterback Colt McCoy left a loss to the Panthers with a chest injury. ... For Carolina, safety Myles Hartsfield suffered a hand injury. ... Philadelphia Eagles tight end Dallas Goedert suffered a concussion in a win over the Broncos. ... Denver linebacker Baron Browning injured his back. ... Las Vegas Raiders fullback Alec Ingold suffered a serious knee injury in a loss to Kansas City, and running back Jalen Richard hurt his ribs.

Cam Newton threw for 8 yards on four attempts, rushed three times for 14 yards — and was the Panthers' biggest star in a 34-10 win at Arizona. Playing mostly in short-yardage situations, he ran for a TD on his first play of the game and later threw for a score. Newton, who signed a one-year contract this week with his former team thin at QB, admitted he didn’t know much of the playbook after having three days to prepare, joking that his knowledge was “two touchdowns’ worth.”

Green Bay Packers quarterback Aaron Rodgers said he felt “a little misty” as he walked off the field a winner after missing last week's game with COVID-19. Rodgers became the biggest story in the NFL when he tested positive for the coronavirus and confirmed afterward that he was unvaccinated, despite having said before the season he was “immunized.” The Packers were limited on offense and lost at Kansas City last week with backup Jordan Love at quarterback, and while things didn't click all that well in Sunday's 17-0 win over Seattle, the team benefited from Rodgers' steady play.

It’s been downhill for Mike White since the Jets’ backup quarterback led the team to a surprising win over Cincinnati in his first career start and won the hearts of New York fans. He threw four interceptions as New York was routed 45-17 by Buffalo, got banged up late and was replaced by veteran Joe Flacco. It may be White’s last chance to start for a while, with rookie Zach Wilson close to returning from a sprained knee ligament.

ALL RIGHT, WE'LL CALL IT A DRAW

The Pittsburgh Steelers and Detroit Lions can each lament multiple opportunities to avoid the NFL's first tie of the season.

Mason Rudolph hit Diontae Johnson for a 39-yard gain down the sideline on Pittsburgh’s first possession of overtime, but Johnson fumbled while fighting for extra yards and Detroit’s Amani Oruwariye recovered.

The Lions then moved into position for a 48-yard field goal attempt. But Ryan Santoso, filling in for injured Austin Seibert, saw his kick flutter well short into the open end of the stadium.

The Steelers had one last shot as time wound down. But rookie tight end Pat Freiermuth fumbled near the Detroit sideline with 9 seconds left. A series of laterals by the Lions on the final play ended far short of the end zone as the clock hit all zeros with the score 16-16.

“The stupidity has to go away if we’re going to go anywhere,” Tampa Bay coach Bruce Arians said after a loss at Washington. “We’re a very dumb football team, and that’s a reflection on the coaches.”

“He was making so many moves I didn’t know who to block.” — Eagles linebacker Davion Taylor on teammate Darius Slay's 83-yard return of Taylor's forced fumble for a touchdown against Denver.