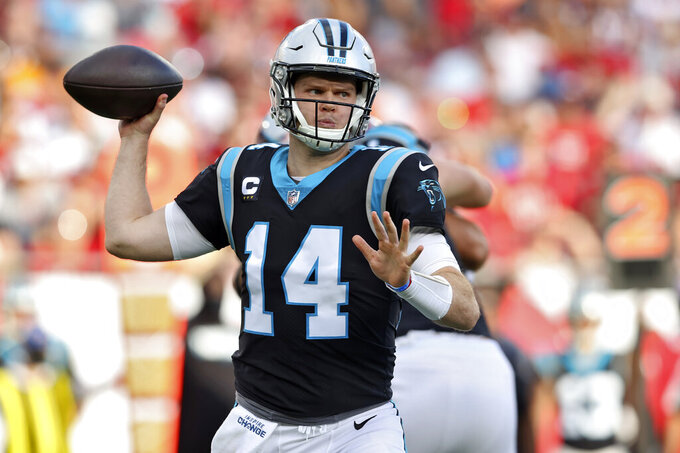 FILE - Carolina Panthers quarterback Sam Darnold (14) throws a pass against the Tampa Bay Buccaneers during the first half of an NFL football game Sunday, Jan. 9, 2022, in Tampa, Fla. or now, Sam Darnold and P.J. Walker are the only quarterbacks on the roster, although that figures to change before the season begins. (AP Photo/Mark LoMoglio, File)

CHARLOTTE, N.C. (AP) — The Carolina Panthers desperately need to find a franchise quarterback —and a left tackle to protect him.

Such is the dilemma the Panthers face heading into the NFL draft, where they hold the No. 6 overall selection.

For now, Sam Darnold and P.J. Walker are the only quarterbacks on the roster, although that figures to change soon.

The Panthers attempted to address their glaring quarterback need in the offseason, making a strong pitch to Deshaun Watson before being rebuffed by the controversial QB.

Carolina is likely to have its choice of the top three quarterbacks in the draft at No. 6 — Liberty’s Malik Willis, Pittsburgh’s Kenny Pickett and Mississippi’s Matt Corral.

And while Panthers coach Matt Rhule said at the NFL owners meetings he expects at least one quarterback to be selected in the top 10, it could be a reach to take any of them as early as No. 6.

“Part of this process has been really evaluating the trade market, and evaluating the draft; see who all is there,” Rhule told the team's website. “I think we will be aggressive in every sense of the word, as we have been. Just try to make sure we make as good a decision as we can.”

It's unclear if Rhule would be willing to wait on developing a young quarterback given his uncertain future with the team after going 5-11 and 5-12 in his first two seasons in Carolina.

The quicker path to more wins might be selecting a left tackle at No. 6 and addressing the quarterback need in a trade.

The Panthers could still make a play for Cleveland’s Baker Mayfield or San Francisco’s Jimmy Garoppolo, two quarterbacks who are expected to be moved at some point this offseason. There is also growing uncertainty over Kyler Murray’s status in Arizona, given his contract situation.

The Panthers are intrigued by North Carolina State's Ikem Ekwonu and Alabama's Evan Neal, although both could be off the board before they pick. They're not believed to be as high on Mississippi State's Charles Cross.

Another option general manager Scott Fitterer has is trading down and acquiring additional draft picks — which would make sense since the Panthers don't have a second or third-round pick after dealing them for Darnold and cornerback C.J. Henderson last year.

There is another wild card at No. 6.

In the spirit of taking “the best player available” it's entirely possible the Panthers go after an edge rusher should Michigan's Aidan Hutchinson or Oregon's Kayvon Thibodeaux unexpectedly fall out of the top five.

Defensive coordinator Phil Snow said he expects Reddick's spot to be filled by a committee led by Frankie Luvu, but it wouldn't hurt to have a top-notch pass rusher opposite Brian Burns — especially if they're not sold on any of the quarterbacks or offensive tackles available.

Wide receiver Robby Anderson is one Carolina player who apparently doesn't want to see the team make a trade for Mayfield.

After a report from NFL Network listing Carolina as one of the potential landing spots for Mayfield, Anderson responded to the report on his Instagram account by writing "Nooooo.”

The Panthers would love to move Darnold before the draft, but that's unlikely to happen given they picked up the fifth-year option on his contract last year and are on the hook for $18.9 million under the cap.

New offensive coordinator Ben McAdoo said this week he considers Darnold the team's “starter in the building” for now.

“I think Sam does have some magic in his game," McAdoo said. "I think he’s got some athleticism to him. I’m excited to work with Sam. We’ve been working the last few days here to kind of get up to speed on the offense. And he’s shown flashes of being a good player in this league.”

But it's important to note that McAdoo once said in a New York Post article that he felt Darnold had a “fundamental flaw” in his passing motion.

Snow said this week that safety is an area of need for the Panthers at some point in the NFL draft, which is surprising considering Jeremy Chinn will remain at that position and the team signed free agent Xavier Woods and re-signed Juston Burris and Sean Chandler.

Snow pointed to the flurry of injuries at safety last season that negatively impacted the team.

Given Fitterer’s history of draft day trades, those numbers are likely to change.

The second-year GM made four trades on the second day of the draft last year alone.

By Mitch Stacy 42 minutes ago
By Dennis Waszak Jr. 13 hrs ago
14 hrs ago
By Kyle Hightower 14 hrs ago
By Schuyler Dixon 15 hrs ago