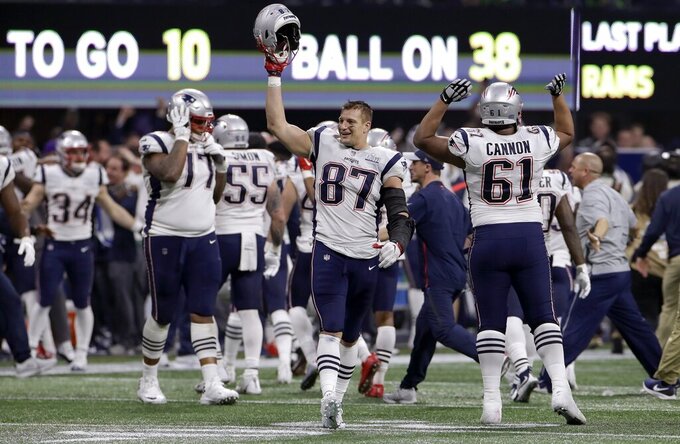 FILE - In this Feb. 3, 2019, file photo, New England Patriots' Rob Gronkowski (87) celebrates with teammates after the NFL Super Bowl 53 football game against the Los Angeles Rams in Atlanta. The Patriots won 13-3. Gronkowski says he is retiring from the NFL after nine seasons. Gronkowski announced his decision via a post on Instagram Sunday, March 24, 2019, saying that a few months shy of this 30th birthday “its time to move forward and move forward with a big smile.” (AP Photo/Carolyn Kaster, File)

BOSTON (AP) — The party's over for Rob Gronkowski. Then again, it might just be getting started.

The four-time All-Pro posted his decision on Instagram , saying that a few months shy of his 30th birthday "it's time to move forward and move forward with a big smile."

"It all started at 20 years old on stage at the NFL draft when my dream came true, and now here I am about to turn 30 in a few months with a decision I feel is the biggest of my life so far," Gronkowski wrote in his post. "I will be retiring from the game of football today."

The playmaking tight end, who turns 30 in May, leaves as a three-time Super Bowl champion who established himself as one of the most dominant players at his position and one of Tom Brady's favorite targets. His personality — on and off the field — was as big as his biceps, and he always seemed to be the life of the party.

"In the nine years that I have known Rob Gronkowski, I have never known him to have a bad day," Patriots owner Robert Kraft said in a statement. "He always has a youthful exuberance about him and is a joy to be around.

But Gronkowski has been dogged in recent seasons by back, knee, ankle and arm injuries that have limited his ability to stay on the field.

It led him to hint at retirement following New England's Super Bowl loss to the Philadelphia Eagles to end the 2017 season and again last month after the Patriots' Super Bowl win over the Los Angeles Rams.

In his Instagram post, Gronkowski thanked the Patriots organization, coach Bill Belichick and New England's fans for their support during his nine NFL seasons.

"Thank you for everyone accepting who I am and the dedication I have put into my work to be the best player I could be," Gronkowski wrote.

"His production spoke for itself, but his daily attitude, unmistakably positive energy wherever he went and toward whoever he touched will never be forgotten," Belichick said in a statement.

"Love you man!!" Brady wrote on Instagram, along with an emoji of a goat to refer to Gronkowski as the greatest of all-time. "Couldn't be a better person or teammate!!!!"

It was a sentiment shared by receiver Julian Edelman.

"The other goat," Edelman posted on his Instagram page, also referring to Brady.

Though he won't have the longevity of some of his contemporaries at tight end, Gronkowski is expected to get strong consideration for the Pro Football Hall of Fame when eligible.

Gronkowski, a second-round pick in the 2010 draft, had his fourth career 1,000-yard receiving season in 2017 and was an All-Pro for the fourth time that season.

But at times he looked like a shell of himself during the Patriots' Super Bowl run this past season. Gronkowski finished the 2018 regular season with just 47 catches for 682 yards and three touchdowns.

He had one of his best games of the season in the Patriots' Super Bowl win over the Rams, hauling in six catches for 87 yards, including two receptions on New England's only touchdown drive during their 13-3 victory.

A fan favorite in New England for his gregarious and playful persona that included awkward dance moves and touchdown celebrations, Gronkowski was one of the most dominant tight ends of his era.

He'll also retire with 79 career TD catches — regular season and playoffs — which is third all-time by a tight end behind only Antonio Gates (116) and Tony Gonzalez (111).

Brady and Gronkowski connected on 78 TD passes. It is the second-most scoring connections between a quarterback and a tight end in NFL history behind only Philip Rivers and Gates (89) and is fifth overall between quarterbacks and all pass-catchers.

"Rob will leave an indelible mark on the Patriots organization and the game," Brady said, "as among the best, most complete players at his position to ever play."