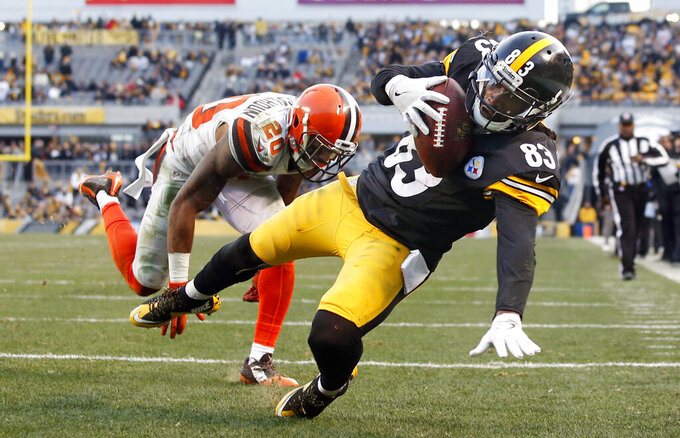 FILE - In this Jan. 1, 2017, file photo, Pittsburgh Steelers wide receiver Cobi Hamilton (83) makes the winning touchdown catch during overtime of an NFL football game with Cleveland Browns strong safety Briean Boddy-Calhoun (20) defending in Pittsburgh. Whether playing in Three Rivers Stadium or at Heinz Field, most of Cleveland's trips down the Turnpike and across the Pennsylvania state line have not gone well. The Browns are just 6-41 on their visits to the Steel City since 1970. (AP Photo/Jared Wickerham, File)

CLEVELAND (AP) — The Browns have been pitiful in Pittsburgh — for half a century.

Whether playing in old Three Rivers Stadium or at Heinz Field, with its tricky winds and rowdy, towel-twirling fans, most of Cleveland's trips down the Turnpike and across the Pennsylvania state line over the past five decades have not ended well.

“We are not worried about the past," said the Browns quarterback, who is dealing with bruised ribs. “We are worried about right now.”

Off to their best start in 26 years, the Browns (4-1) carry a 16-game losing streak into Pittsburgh for Sunday's matchup against the unbeaten Steelers (4-0), who will be seeing sensational defensive end Myles Garrett in person for the first time since he clobbered quarterback Mason Rudolph over the head with a swung helmet last November.

Garrett's appearance only adds spice to a rivalry not needing any extra salt. Although it's been lopsided for a while, there's plenty of history and bad blood between the cities and their fans.

The Browns are one of the NFL's surprise teams this season. The Steelers are, well, the Steelers. They're 4-0 for the first time since 1979.

Although he's an absurd 23-2-1 in his career against Cleveland, Pittsburgh quarterback Ben Roethlisberger knows better than to overlook the Browns.

“A lot of those guys — I looked at their roster today, they only have two guys that have 10 years of experience in the league," Roethlisberger said. “It’s not like these guys have been playing us for years and years and years and worrying about how many times the Steelers have won.

"That’s not what it’s about. It’s a new season, new teams, and they’re a really good football team.”

This will be the first taste of Browns-Steelers for tight end Austin Hooper after coming to Cleveland from Atlanta, where he experienced another of the NFL's nastier rivalries.

“Falcons-Saints," he said. “That would be a good one. You get all the fans in New Orleans fresh off Bourbon Street in there.”

Of course, there will be only 5,500 fans — and not the usual 68,000 — on hand on Sunday because of COVID-19 restrictions, and Browns coach Kevin Stefanski wasn't sure if that would benefit Garrett and his teammates.

The Browns' long losing skid at Heinz extends back to 2003, when quarterback Tim Couch had one of his finest moments in an orange helmet while leading Cleveland to a 33-13 win.

It's been putrid in Pittsburgh since as the Browns have dropped 16 straight and gone 2-18 overall in their archrival's hostile home since returning as an expansion team in 1999. Surprisingly, one of that awful Cleveland team's two wins that season was a last-second, 16-15 victory at Pittsburgh.

They've had plenty of close calls, with three of Cleveland's past five losses at Heinz coming by four points or fewer.

There could be plenty of reasons why the Browns have struggled in Pittsburgh, but Pro Bowl guard Joel Bitonio said there's a basic bottom line.

“No. 1 is that they are a good team,” Bitonio said. "They have good players, they have a great defense, Big Ben and company on offense. And it is just a different atmosphere. You go down there and the fans do a good job of getting loud. It is kind of on the river right there, you get the wind coming in.

“I think kickers kind of think about that kind of stuff. But from a player’s perspective, it is just another game. I think the No. 1 thing for home-field advantage is, is your team good? And then they have a pretty good team over there.”

Before their horrors at Heinz began 17 years ago, the Browns had a 16-game losing streak from 1970 to 1986 at Pittsburgh. Once they finally ended a slide many Cleveland fans viewed as a jinx, the Browns won three in a row at Three Rivers, capped by a 51-0 blowout in the 1989 season opener.

A win this week could do wonders for these Browns.

“Obviously, division games are always meaningful for us, but they are undefeated and we are 4-1,” Mayfield said. "It is an extremely important game, but that is because it is the next one. We have to handle it that way, and we are on the road in somebody else’s house.”