Raiders accountability: Make a mistake in camp, take a lap 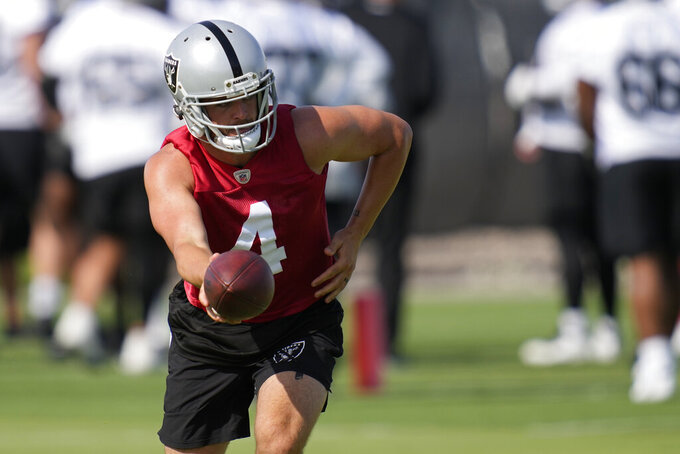 Reminiscent of youth football practices, several of his teammates took a lap around one of the three fields at the team's training facility after making a mistake.

“I think I’m one of the oldest guys on the team now and this is my first time ever seeing that,” Jones said Friday after practice. “I think having accountability is very important. There should always be consequences to certain actions, especially if they’re negative actions. You should always be accountable for sure."

And nobody has been spared the discipline.

When rookie offensive lineman Dylan Parham was out of sync and starting quarterback Derek Carr botched an exchange, they were the first to take a jog around the field on the opening day of camp. Later it was center Andre James.

Carr said if players like Davante Adams or Maxx Crosby, don't do it, "then it’s not a team game.”

Carr also said the accountability initiative becomes contagious, with teammates who didn’t make a mistake joining in on the run to help whoever might be struggling with miscues.

“That’s what really helps teams,” Carr added. “Doesn’t mean you’re going to win everything, but it brings your team closer, which helps lead to those things.”

First-year coach Josh McDaniels said that outside of his team working hard to improve leading up to the preseason opener on Aug. 4 against the Jacksonville Jaguars, he hasn’t placed many expectations on the Raiders.

“We’re not worried about thinking about opponents, and games, and strategies, and those kinds of things,” McDaniels said. “This is about fundamentals, and techniques, and conditioning, and communication, and learning each other, and knowing how to work with different groups of your teammates. And there’s so many things we have to do between now and when we’re going to play, even play the first preseason game. That’s my expectation as a coach and I think the team has done a great job of adopting that mindset because it’s the only thing we can control.”

Backup tight end Foster Moreau echoed Carr’s sentiments that it begins with the star power on the team, and everyone else seeing the bigger names abiding by the same rules.

"They have been really good about preaching that. And so QB-center exchange, it’s a two-man job, and if it gets fumbled guys are taking laps,” Moreau said. “And they are doing it on their own and I think it’s pretty special from them to hold themselves accountable like that and it kind of shows like a beacon for us where we are trying to go.”

The Raiders will be playing in a stacked AFC West where mistakes must be kept to a minimum if they want to win the division, or simply return to the postseason for a second straight season and third time in 20 years.

The Los Angeles Chargers are a retooled team that added strength on the defensive side of the ball, including former Raiders linebacker Khalil Mack; the Denver Broncos brought in Super Bowl-winning quarterback Russell Wilson; and, the Kansas City Chiefs have one of the best in the game in quarterback Patrick Mahomes.

“Mistakes cost you,” safety Duron Harman said. “At that point in practice, it might not cost you the game, but it’s going to cost you a lap, and if you ask those guys after (they) run that lap, you’re a little tired and you have to go back and still have to focus. It’s a part of the accountability we want to have to be a part of this team.”