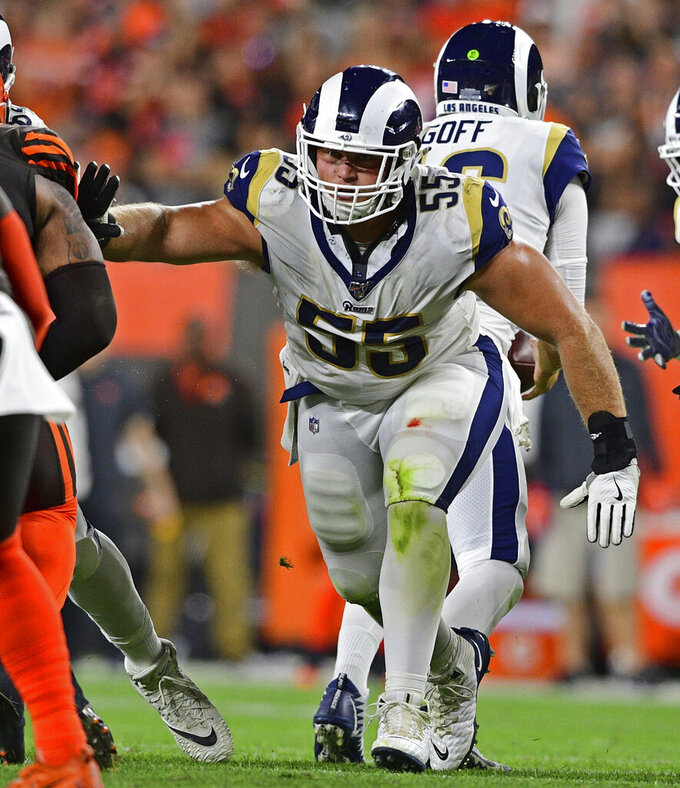 In this Sept. 22, 2019, photo, Los Angeles Rams center Brian Allen blocks during the second half of an NFL football game against the Cleveland Browns in Cleveland. Allen said Wednesday, April 15, 2020, that he tested positive for COVID-19 three weeks ago. Allen is the first active NFL player to acknowledge testing positive during the coronavirus pandemic. (AP Photo/David Dermer)

Allen is the first active NFL player to acknowledge testing positive during the coronavirus pandemic.

The third-year pro is not hospitalized and is “feeling good,” according to a statement issued by the Rams on Wednesday night only after Allen spoke to Fox Sports about his positive test.

Allen became the team's starting center last season. He played in nine games before missing the rest of the year with a knee injury.

Allen is expected to start at center again this season. He was a fourth-round draft pick out of Michigan State in 2018, playing largely on special teams as a rookie.

The 24-year-old Allen was training and rehabilitating at the Rams' training complex when he began to feel symptoms last month. He told Fox Sports that he lost his sense of smell and taste, and they haven't returned even after his other symptoms abated.

Rams general manager Les Snead and coach Sean McVay both dodged the question last week when asked if any members of the organization had fallen ill.

“Everybody is doing really well,” McVay said at the time. “There’s been a couple guys that we’ve had some conversations with, but they’re in a good place right now.”