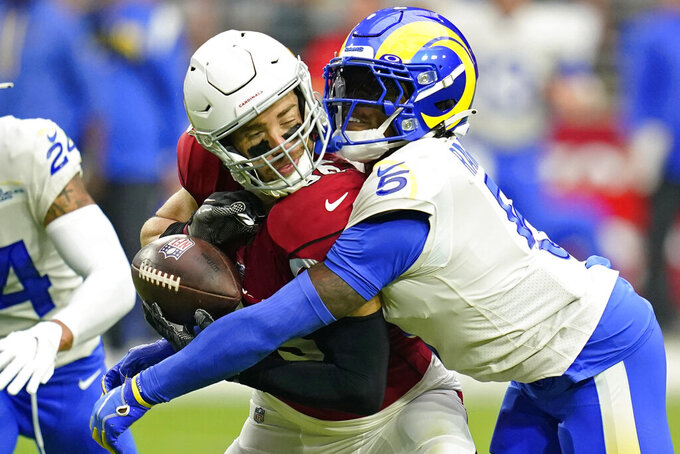 GLENDALE, Ariz. (AP) — The Los Angeles Rams defense survived quite an onslaught on Sunday afternoon, defending 58 passing plays from Arizona's Kyler Murray, who is notoriously hard to defend because of his ability to throw and run.

Sean McVay wasn't worried about giving up a few 10-yard passes or 5-yard runs, he just didn't want to surrender the big one.

“Just make them snap it one more time,” the Rams coach said.

McVay called it a “strange” game. The Rams controlled most of the afternoon but didn't capitalize on a few chances to put the game away.

“There are no style points in this game,” McVay said. “But there are ways to play more complete games. That's what we're hunting.”

LA's offense had some good moments, but the win was largely due to its defense. Aaron Donald had a sack and two tackles for loss while Jalen Ramsey added two passes defended and a tackle for loss. The Rams gave up 365 total yards but limited the Cardinals to no touchdowns and four field goals.

Rams safety Nick Scott credited the defensive line with making the job easier for the secondary.

“Those guys did a great job of rushing with intensity and violence, but also making it tough for (Murray) to get out of the pocket,” Scott said. “We knew if we could keep him in the pocket, we’d do our thing on the back end.”

Arizona's Kyler Murray was 37-of-58 passing for 314 yards. Marquise Brown caught 14 passes for 140 yards. The Cardinals have lost seven of nine games dating to last season.

The Cardinals (1-2) cut the deficit to 13-9 in the third quarter on Matt Prater's third field goal of the afternoon, this one from 49 yards.

But the Rams took control on the ensuing drive, with Akers shaking off multiple would-be tacklers to score on a 14-yard run for a 20-9 advantage. It capped an eight-play, 85-yard drive that included a big conversion on third-and-11 when Stafford evaded Arizona's pressure, spun and delivered a pass to Kupp.

“I thought that was the play of the game,” McVay said. “We had to have that.”

Los Angeles pushed its lead to 10-0 in the first quarter when Kupp ran for a 20-yard touchdown. Kupp was in motion before the play and took a quick handoff from Stafford, which fooled most of the Cardinals defense and allowed the receiver room to sprint to the corner of the end zone.

While the Rams were building a 13-0 lead, the Cardinals had another slow start on offense. Arizona had just 14 yards rushing before the break and settled for two field goals, trailing 13-6 at halftime.

Cardinals coach Kliff Kingsbury said there's plenty of blame to share for the anemic offensive production, particularly in the first half.

“I don't know if we're trying too hard to call a perfect play or do too much, but it's just been one thing after another," Kingsbury said. “We've got to get it figured out.”

Said Murray on the first-half struggles: “I wish I had the answer right now. That’s not winning football. We make it tough on ourselves.”

The Cardinals were coming off a thrilling 29-23 overtime win over the Las Vegas Raiders, clawing back into the game after falling behind 20-0 at halftime. The Rams beat the Falcons 31-27 last weekend.

Akers had some good moments, but also a bad one. He fumbled at the 1-yard line while trying to score a touchdown in the fourth quarter that would have put the Rams ahead 27-9.

The Rams turned a blocked punt into an eventual field goal during the first quarter. Andy Lee’s punt was deflected by Michael Hoecht, and Los Angeles recovered at Arizona’s 35-yard line. Eight plays later, Matt Gay made a 22-yard field goal for a 3-0 lead.

Rams: CB Derion Kendrick was evaluated for a concussion.

Rams: Get an extra day off before traveling to face the 49ers on Monday, Oct. 3.

Cardinals: Travel to face the Panthers next Sunday.