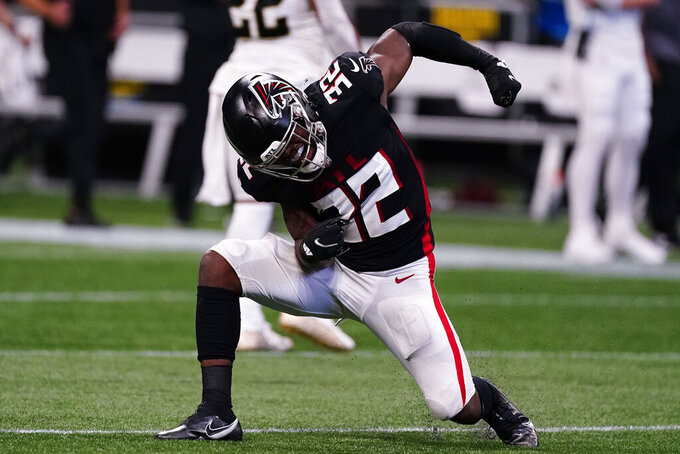 Atlanta Falcons safety Jaylinn Hawkins (32) celebrates a fumble the team recovered against the New Orleans Saints during the second half of an NFL football game, Sunday, Sept. 11, 2022, in Atlanta. (AP Photo/John Bazemore)

OPENING LINE: Rams by 10 1/2, according to FanDuel SportsBook.

TURNOVER DIFFERENTIAL: Falcons minus-1; Rams plus-1.

FALCONS PLAYER TO WATCH: DE Grady Jarrett. The veteran kicked off his eighth season with 1 1/2 sacks in a standout performance against New Orleans. He could be ready to eat again when he faces a Rams offensive line that gave up seven sacks last week.

RAMS PLAYER TO WATCH: WR Allen Robinson. LA's big offseason addition got just one catch in his Rams debut, and his two targets were the fewest of his nine-year career in a game in which he didn't incur a season-ending injury. Robinson says he'll be patient for his chances, but the Rams clearly need him to get the ball if they want to take pressure off Cooper Kupp.

KEY MATCHUP: Falcons WR Drake London vs. Rams CB Jalen Ramsey. After a solid NFL debut against New Orleans, London is coming home to Southern California, where he grew up in Ventura County and starred at USC. Although Ramsey won't be lined up against Atlanta's first-round pick all the time, the Rams' All-Pro corner could use a redemption game after accomplishing little in coverage against the Bills.

KEY INJURIES: The Rams' offensive line will be shuffled after C Brian Allen's knee injury. Coleman Shelton is sliding over to center, and Tremayne Anchrum will start in his place at right guard. Anchrum got just three offensive snaps in his first two-plus NFL seasons. ... LT Joseph Noteboom also strained his knee ligaments, but the Rams believe he can play. ... Rams WR Van Jefferson will miss his second straight game after knee surgery in training camp. ... Falcons RB Damien Williams missed practice Wednesday after injuring his ribs early in Week 1 and only returning for one late play.

SERIES NOTES: The previous time the Falcons played the Rams in a regular-season game in Los Angeles, they got Jeff Fisher fired. The longtime Rams coach was dismissed one day after Atlanta's 42-14 win late in the franchise's homecoming season. ... The Falcons visited the LA Coliseum again 13 months after that blowout, and they won again in coach Sean McVay's first career playoff game. ... Atlanta has won five of the teams' six meetings since 2008, but LA routed the Falcons in their most recent meeting in 2019.

STATS AND STUFF: Atlanta blew a 16-point lead in the fourth quarter of its season opener against New Orleans. ... Falcons QB Marcus Mariota and Rams DB Troy Hill played four seasons together at Oregon. ... RB Cordarrelle Patterson is coming off a career-high 120 yards rushing in the opener. ... Coach Arthur Smith says he is eager to make his first visit to SoFi Stadium. The Falcons faced the Chargers in Inglewood in 2020, losing on a field goal at the gun. ... The Rams are below .500 for the first time under McVay after losing their season opener for the first time under McVay. ... The Rams haven't started a season 0-2 since 2011 in St. Louis, That team eventually finished 2-14, leading to GM Billy Devaney's firing and Les Snead's hiring. ... Los Angeles' defense had four takeaways in the season opener. The Rams have had a takeaway in 11 of their past 12 games. ... DT Aaron Donald has 99 career sacks. He will be the seventh active player to get 100 sacks. ... Robinson needs four catches to reach 500 for his career. He had only the eighth one-catch game of his career during his Rams debut last week. ... The Rams' next victory will be the franchise's 600th. They'll be the sixth team in NFL history to reach the mark.

FANTASY TIP: Stafford and the Rams insist his arm is fine, but he wasn't accurate on several big throws, and he struggled to get the ball to anyone but Cooper Kupp. The Rams' running backs also didn't do much, with Cam Akers producing no yards on three carries. Facing the Falcons should be a chance for LA's skill-position players to score fantasy points again, but only the Super Bowl MVP is currently a sure thing.