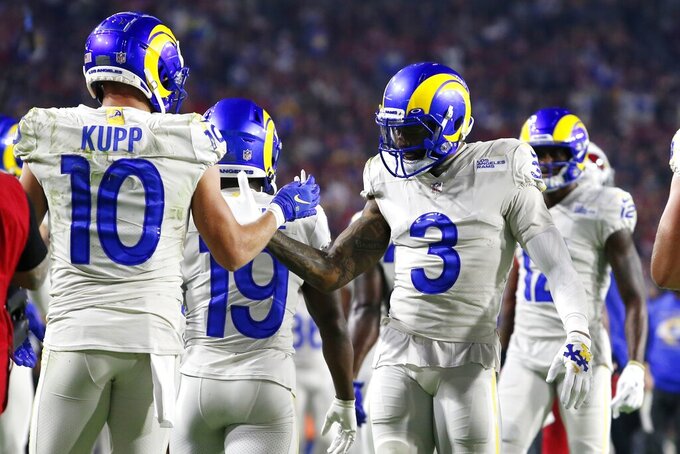 LOS ANGELES (AP) — The Los Angeles Rams' biggest win of the season was even more impressive because of the COVID-19-related chaos they had to overcome to get it.

The Rams (9-4) will take what they learned from their 30-23 victory at Arizona on Monday night into a short week that might be even more difficult because of more problems with their latest virus outbreak.

The Rams placed nine more players on their reserve/COVID-19 list and activated one player Tuesday, leaving them with 13 players on the list. They were missing six starters because of COVID-19 and injuries while beating the Cardinals, and while only two key contributors — leading tackler Jordan Fuller and receiver Odell Beckham Jr. — were among their latest additions, it's too soon to know how many Rams will be absent when they host the Seattle Seahawks (5-8) on Sunday.

“I am very surprised, because you feel like you're behind it when everybody is vaccinated and you're moving in the right direction,” an obviously frustrated Rams coach Sean McVay said. “Without a doubt, we have never experienced anything of this magnitude as it relates to COVID. This is definitely something that's been eye-opening.”

The Rams played in Glendale with five starters in COVID-19 protocols, including 2020 All-Pro cornerback Jalen Ramsey, right tackle Rob Havenstein and tight end Tyler Higbee. Ramsey and Higbee were ruled out hours before kickoff, which meant Los Angeles had few options except to plug in replacements and play.

“There's no time to say, ‘We’re going to scrap this and adjust,'” McVay said. “At least if you have an idea of who's going to be available and who's not, you can plan accordingly throughout the course of the week. What they did yesterday gives me confidence.”

Those replacements largely performed solidly, with the caveat that probably no player in the league could fill the unique role Ramsey holds on Los Angeles' defense. Backup swing tackle Joseph Noteboom stepped in for Havenstein, and the Rams used a variety of personnel packages to compensate for Higbee's absence.

Los Angeles' overall tenacity in perhaps its toughest game of the season was tremendously encouraging both to McVay and to fans who watched a strong start fall apart during the Rams' 0-3 November.

Just when they appeared to be slipping into the second tier of Super Bowl contenders after traveling to Green Bay and taking their third straight defeat, the Rams showed they're capable of beating another contender on the road.

Matthew Stafford came up with one of his biggest performances in years while beating an opponent with at least 10 victories for the first time in his 13-year NFL career. His six-turnover spree during the Rams' losing streak behind him, Stafford was 23 of 30 for 287 yards and three touchdowns while making several jaw-droppingly good throws. Los Angeles needs its new quarterback to be elite, and Stafford delivered this time.

The Rams face a rough week of preparation for Seattle, and the entire team will have to show new levels of resourcefulness. Their adaptability will be tested in the next six days after they shut down their training complex in Thousand Oaks on Tuesday except for treatment for injured players. They will conduct meetings remotely Tuesday and Wednesday without practicing, although McVay likely wouldn’t have held a significant practice on a short week anyway.

Nose tackle Greg Gaines has been on the roster for three seasons, but he only recently got to show what he can do after the offseason departure of Michael Brockers and the in-season injury loss of Sebastian Joseph-Day. Gaines has been a revelation, playing stoutly against the run while showing an athleticism that's nearly shocking from a 312-pound lineman. Gaines had five tackles and a sack against the Cardinals while making several huge plays.

The Rams are trying to reach the playoffs with a secondary in which presumptive backups and practice squad players are getting major responsibilities even before their COVID-19 absences. Kyler Murray passed for 383 yards against a group that included Kareem Orr and Terrell Burgess, who both struggled mightily.

The Rams got away with it this week with David Long Jr. filling in decently for Ramsey, but the shaky depth looms over their season — particularly if they have to face Tom Brady or Aaron Rodgers to get to the Super Bowl.

The Rams' COVID-19 problems are bigger than their football injuries at this point. McVay and the training staff didn't have a meeting about the progress of center Brian Allen, cornerback Robert Rochell and other injured players Tuesday.

5 — The number of consecutive winning seasons for the Rams under McVay. This franchise had endured 13 straight non-winning seasons before McVay arrived in 2017, but it has gone 52-25 in the regular season since. Los Angeles hadn't put together five straight winning records since 1980, when it had eight straight.

A win over the up-and-down Seahawks in their penultimate home game of the regular season would move the Rams close to a playoff spot and keep the pressure on Arizona atop the NFC West.

With cold-weather road trips to Minnesota and Baltimore looming, Los Angeles really doesn't want to slip up against Seattle.