Reunion Tour: College teammates getting back together in NFL 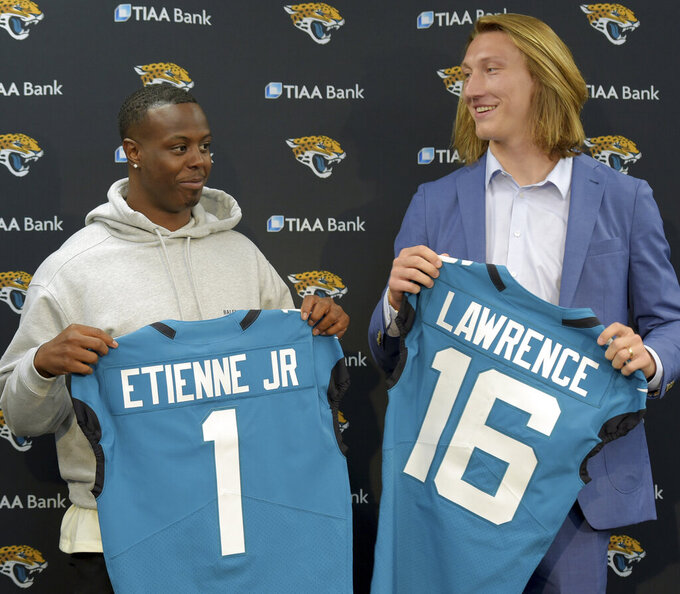 JACKSONVILLE, Fla. (AP) — Trevor Lawrence was fielding calls, posing for pictures and still hugging everyone in sight when he realized the Jacksonville Jaguars were about to be back on the clock during the first round of the NFL draft.

The No. 1 overall pick paused the in-house festivities and turned up the sound on the big-screen television.

The spoiler alert created another celebration at Lawrence’s draft party in South Carolina. Lawrence and standout running back Travis Etienne were teammates again, reunited in the NFL after spending three years together in college.

“It just makes it special,” Lawrence said. “I’ve got someone to come with me from Clemson, and it’s just awesome.”

The Jaguars chose Etienne at No. 25, using their first two picks on college teammates for the first time since drafting UCLA tight end Marcedes Lewis (No. 28) and running back Maurice Jones-Drew (No. 60) in 2006.

Jacksonville’s latest reunion was one of several similar ones around the league.

Coincidence? Probably not after a year in which evaluating and getting to know prospects was more challenging than ever.

The NFL prohibited scouts from traveling last season because of COVID-19 concerns. The league also banned testing, interviewing in person or giving medical exams to any draft-eligible player at any location except a school’s pro day or at an all-star game.

So teams were forced to get creative — or possibly predictable — to scout college football’s top talent. After all, you can’t watch Lawrence without noticing Etienne. Same goes for Tagovailoa and Waddle, Burrow and Chase, and Hurts and Smith.

And talking to college coaches at length was a viable option for gaining information on players. So it would have been somewhat expected that NFL teams digging for details on one guy might find out tidbits on another, a teammate.

“Does it help? Certainly,” Jaguars general manager Trent Baalke said. “There’s a lot of familiarity with each other, both in the pass game and the run game, so I think it does help.”

There’s little doubt that Jacksonville, Miami, Cincinnati and Philadelphia are all trying to recapture some of the chemistry and success their tandems (or trios) enjoyed in college. Alabama (2015, ’17, ’20), Clemson (’16, ’18) and LSU (’19) combined to win the past six national championships.

Having someone on your roster with insider knowledge helps, too. Bengals coach Zac Taylor went to Burrow and asked specifically about Chase before the draft.

It shouldn’t have been a surprise to see the Patriots and Steelers go the teammate route in the draft. After all, two of the NFL’s most successful franchises have been doing the same for years.

Since selecting guard Logan Mankins (first round) and defensive back James Sanders (fourth) from Fresno State in 2005, New England and coach Bill Belichick have drafted college teammates 12 times in 16 years. He took three Florida players in 2010 and three Rutgers players in 2013.

This year, the Pats doubled up on teammates and loaded up on Alabama guys.

“It’s an unbelievable feeling,” said Johnson, a linebacker with the Aggies. “If you look at the recent years, the Steelers have always picked some of the players from same teams that played together. So, for me to go play with Dan Moore, that’s my guy. ... It’s all about having guys that you trust and the guys at the Steelers in the locker room are fired up about it. I’m ready to go to work.”

No one seems more excited about landing a teammate tandem than the Jaguars, who got two offensive stars and possibly the No. 1 QB prospect to come out of college in nearly a decade.

They surely can gleam plays from Clemson and shouldn’t have any problem getting those two on the same page from Day 1.

“It provides you with a sense of normalcy having Trevor here, just being with him the past three years,” Etienne said. “With or without Trevor, I’d be making plays; that’s kind of what I’m here to do. I’m just thankful that I have Trevor and we’re on the same team. We don’t have to fight against each other.”