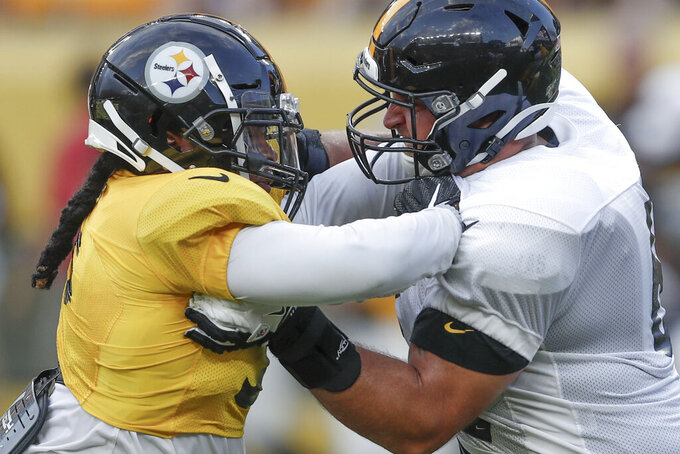 PITTSBURGH (AP) — The Pittsburgh Steelers expect first-round pick Devin Bush to provide a serious jolt of athleticism and swagger to a young defense.

The speedy inside linebacker already made a significant impact in the preseason opener, a 30-28 home victory over the Tampa Bay Buccaneers on Friday night.

"I was less concerned with his productivity and more concerned about his demeanor, and I really liked his demeanor," Steelers coach Mike Tomlin said. "He was present. It wasn't too big for him. He handled the communication responsibilities associated with his job. He was alert and those were good signs."

Bush played 40 snaps in one half of play and finished with 10 tackles, including seven solo. He had six tackles in the first quarter alone, including four solo.

"I was just feeling it, and having fun," Bush said. "I think that's the biggest thing, I was just having fun and playing football again."

It was the first substantial in-game action for the 5-foot-11, 234-pound Bush since he wrapped up a three-year All-American career at Michigan. The Steelers made a rare, aggressive moved and traded up to select Bush with the No. 10 overall pick in the first round.

They felt it was necessary to acquire a do-everything difference maker in the middle of their defense with Ryan Shazier's career in jeopardy as he recovers from spinal surgery. It was the first time the Steelers traded up in the first round since 2003.

Bush didn't disappoint in his first time out with the Steelers.

"I think the biggest thing was that it wasn't practice anymore and I got the chance to play in a game-like setting and compete against another team," Bush said. "I just love to make plays. I love to play football."

Bush made his presence felt with a tackle on his first play of the game. He had four total tackles on Tampa Bay's 12-play, 81-yard touchdown drive.

On the Bucs' second offensive possession, Bush nearly had an interception. He jumped a short route and came away with a pass breakup on third-and-five.

"My arm kind of got stuck," Bush said. "I couldn't get it up in time and by that time the ball was already in my face. It happened so fast. I didn't get my hands up in time and it hit my facemask."

Bush had his pass breakup on third down, but the drive continued because of a roughing the passer call. He later put an end to the series on fourth-and-1 from the Steelers 17. Bush shot through a hole in the offensive line and pursued Andre Ellington in the backfield, combining with Ola Adeniyi for the key fourth-down stop.

"Fourth down came, they went for it, and I just took a shot," Bush said. "If you want to make a play bad enough, you'll do anything in your power to do it. It's definitely a gift."

Bush's athleticism has been evident, but teammates regularly point to the mental aspect of the rookie's game.

"His above-the-neck game is beyond his years right now," outside linebacker Bud Dupree said. "He's making all the calls, and we're making him make the calls so he doesn't' get lackadaisical with us making the calls. He's the guy on the inside now, so he has to make sure he's on top of that."

Bush was happy with how he called the plays Friday against Tampa Bay.

"I think I was pretty vocal," Bush said. "I haven't done that since college. It felt good to get out there and do it again."

It was a learning experience for the rookie, who was pleased with his performance, but not overly satisfied.

"I did decent, I did alright," Bush said. "I think the (interception) would've made it a lot better. But I've got a lot more to work on."