Saints fielding elite defense during surge to top of NFC 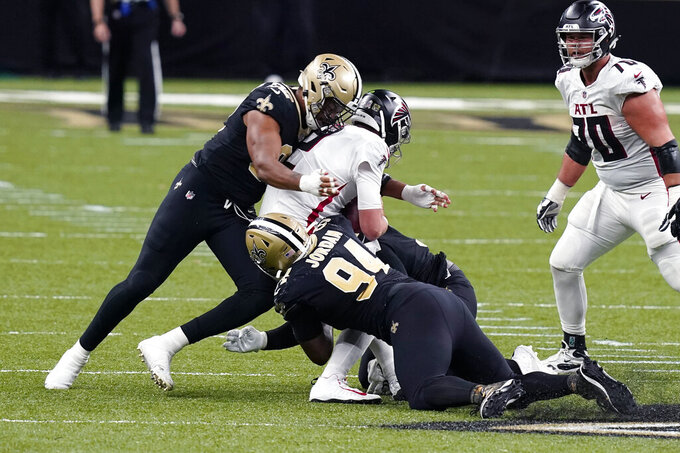 It’s a number that means very little to them if they can’t back it up in the all-important coming weeks.

“I’m going to be honest with you. Numbers don’t mean nothing,” Gardner-Johnson asserted after practice Wednesday, as the first-place Saints prepared for this weekend’s visit to NFC South rival Atlanta.

Gardner-Johnson said his unit is concerned with “stopping the deep ball, stopping the run. Forget the stats. Like, how can we stop this team from scoring. The other team can’t win if they can’t score and that’s what a No. 1 defense is supposed to think.”

Saints opponents have been scoring few points lately and hardly getting in the end zone at all. The Saints have allowed one touchdown in four games. Granted, they played a Denver team last week that had to insert a practice squad receiver at quarterback after all of its regular QBs were declared ineligible under NFL COVID-19 protocols.

But the Broncos’ point total in a 31-3 loss last Sunday was no less than what Tom Brady’s Buccaneers scored in a 38-3 home loss to New Orleans four games earlier. And two weeks ago, the Falcons and QB Matt Ryan also were unable to get in the end zone in a 24-9 loss in New Orleans.

San Francisco, with backup Nick Mullens under center, found the end zone on its opening drive, but was held to just two field goals the rest of the way in a 27-13 loss.

Those four stifling performances by New Orleans' defense have been highlighted by 14 sacks and nine interceptions.

The Saints now rank second against the run, fifth against the pass, third in interception rate, fourth in sacks per pass attempt and fifth in points allowed per game.

And to the Falcons, those numbers do matter.

“Everyone that’s playing these guys is struggling. Look at the Saints’ numbers; they’re fantastic,” Atlanta offensive coordinator Dirk Koetter said. “I’ve never seen a defense ranked in the top 10 in so many categories. They’re playing with a lot of confidence."

Ryan was sacked eight times and intercepted twice in Atlanta’s meeting with the Saints two weeks ago.

“They don’t give up many explosive plays. They get off the field on third down. They’re very good on first- and second-down defense at putting you in third-and-longs,” Ryan said. “When you have a defense that likes to keep things in front of them, doesn’t give you big plays and keeps you off schedule, that’s a recipe for success.”

Certainly, it bodes well for the Saints, winners of eight straight, as they push toward a fourth straight playoff appearance -- and perhaps their first Super Bowl in 11 seasons. At the very least, it has made New Orleans tough to beat even with record-setting quarterback Drew Brees — who’ll miss his third straight game Sunday — sidelined with cracked ribs.

But Jordan, who sacked Ryan three times in Week 11, does not want his defensive teammates resting on past success.

“How many games we have left to the Super Bowl?” Jordan asked rhetorically when the NFL-leading defensive ranking was brought up. “At the end of the season, we’ll talk about it. Right now, we’re trending upwards. I like the way our defense is playing. But at the same time, we still have some room to grow. So, we’re going to try to continue to push ourselves to be better than we were the game before.”