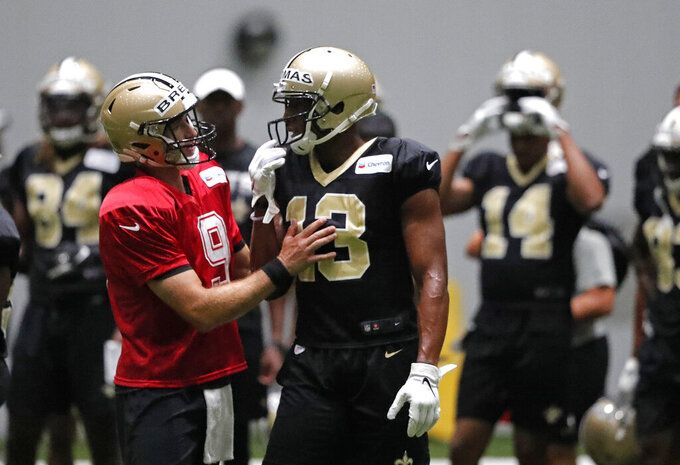 METAIRIE, La. (AP) — Saints receiver Michael Thomas took extra time after his first practice of training camp to catch footballs fired from a machine at close range, first while facing the machine, then while twisting his torso to the left and right as if he were in the midst of a crossing route.

Wearing bright white gloves, his hands enveloped each ball; he didn't drop one.

"Now you're the highest-paid, and now you've got to go earn it," Thomas said Thursday, a day after signing a five year, $100 million extension that includes at least $61 million in guaranteed salary and bonuses. "So that's the biggest thing I'm trying to do. I'm trying to earn every penny of it."

The $20 million annual value of Thomas' extension, which kicks in next season, gives him bragging rights over the most lucrative contract — on a per-season basis — for a receiver in NFL history. There are several other elite receivers around the league — including Atlanta's Julio Jones — whose impending next contracts could eclipse the value of the one Thomas just signed. But that doesn't change the fact that Thomas can take solace in having a contract that reflects his ample production and value to the Saints' passing game.

Thomas said he was training in southern California during his holdout, which cost him five practices. But he made it clear that he took little joy in staying away from training camp while his agents — Andrew Kessler and David Mulugheta — closed out negotiations with Saints general manager Mickey Loomis.

When he wasn't working out, Thomas said, he found himself scanning social media in search of video highlights of the practices he didn't attend.

"First couple days, it was easier," Thomas recalled. "But as it kept going on and prolonging, then you kind of felt like days turned into weeks."

Thomas said he missed "competing against my teammates," adding, "That's part of developing into a great player, and you can't do that sitting at home."

Last season, Thomas ranked first in the NFL in catches with 125, sixth in yards receiving with 1,405 and tied for 10th with nine touchdowns. He has surpasses 1,000 yards in each of his first three seasons, and few of his teammates seemed bothered by the fact that he missed less than a full week of training camp.

"We're still at the beginning of our install for the most part. And he came in here today as if he's been here the whole time. So all good," quarterback Drew Brees said. "I've been texting him, just checking on him, seeing how things were going. And I knew things were close. So I'm glad that it got done."

Brees added that Thomas' return should have a positive influence on practice as a whole because of how hard he competes.

"There's definitely a presence, an attitude, a swagger to what he brings on the field," Brees said. "You know when he's out there. There's no half-speed rep. Everything is a thousand miles an hour, Mach 3 with your hair on fire with Mike. And I think everybody else elevates their game to that. I think he makes the guys he's going up against better."