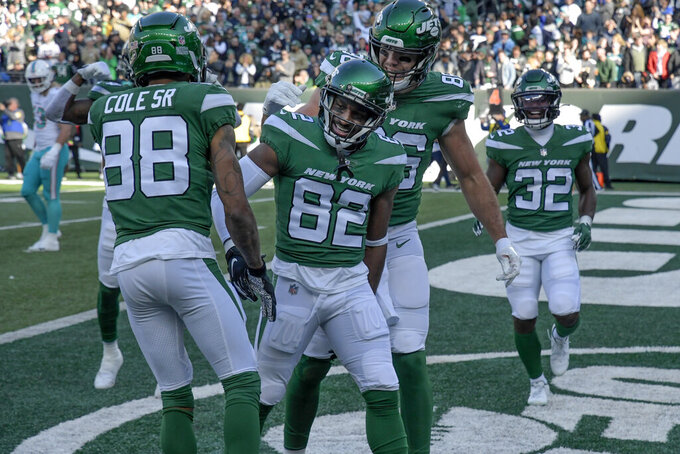 NEW YORK (AP) — There are three words New York Jets fans have grown weary of hearing from the team's coaches and players:

To many, it's all just wash, rinse, repeat.

Losing can harden even the most loyal of followers, who have grown calloused while waiting for another chance at a Super Bowl appearance. After all, 1969 is a long, long time ago. And this is a franchise that will likely miss the playoffs for the 11th straight season, the NFL's longest active drought.

So when Robert Saleh talks about how things will flip in the Jets' favor someday soon, it's easy to brush off. But the coach believes this is truly different — and things will absolutely change for the better, even if that's tough to see at 2-8.

“I respect the heck out of the urgency from the fans and the wanting to flip this thing, but in fairness, this is the first time this fanbase has experienced something like this,” Saleh said Monday. "Usually, it has been a quick fix followed by a scramble.”

General manager Joe Douglas has vowed to build success through the draft and free agency. And this is a rebuild in its infancy — even though the Jets went through one just four years ago when they went 5-11 and drafted Sam Darnold with similar hopes for the future.

That all backfired in a hurry.

The personnel in the front office is different now, and so is much of that on the field. It was another total reset and it starts with Douglas and Saleh, and goes to rookie quarterback Zach Wilson — and on from there.

“This is an actual plan,” Saleh insisted. "I feel like Joe is doing a phenomenal job with a really, really concise plan on how to build from the ground up. And there’s a lot of exciting pieces on this team that are hidden in these losses. But when you sit back and watch it from our perspective and (with) the combination of veterans and youth, it’s definitely going in the right direction.

“And eventually, while frustrating today, it's going to be awesome when this thing gets flipped.”

The players are singing a similar refrain. And while they don't accept a tough loss — filled with penalties, mistakes and missed opportunities — such as their 24-17 defeat against Miami on Sunday, they see positive signs.

At least that's what they're hanging on to as the losses pile up.

“Rome wasn’t built in one day and this thing isn’t going to get turned around in one day,” said right tackle Morgan Moses, before adding: “We have a lot of great players in this building.”

But sooner rather than later, they'll have to prove that on the field. Or Jets fans will be covering their ears — and eyes — again in a few years.

The offense still has issues, especially consistently producing in the red zone and converting scoring opportunities. But the Jets also have some legitimate playmakers. Rookie wide receiver Elijah Moore is a game-breaking-type weapon, and his role will only increase as Mike LaFleur's offense solidifies. New York has visions of a Wilson-to-Moore combination causing opponents problems for years.

The pass rush is almost nonexistent with just three sacks in the last three games. New York had only three pressures in the second half against Miami, and Tua Tagovailoa threw touchdown passes on two of them. There's undeniable talent up front, particularly with Quinnen Williams and John Franklin-Myers, but the D-line needs to have more impact plays.

Bryce Hall. The second-year cornerback has been improving each week. He was one of Pro Football Focus' top-rated players at his position Sunday, when he allowed just four catches for 21 yards against the Dolphins. Hall, a fifth-rounder out of Virginia, is establishing himself as a foundation piece in Saleh's defense.

Matt Ammendola. The kicker's job security seems tenuous at best after missing two field goals against Miami. He's 11 of 16 on field goals, including 0 for 3 on kicks of 50 or more yards. Saleh said the Jets would evaluate the position, along with every other spot, over the next day.

Saleh said Wilson had a “very good” workout before the game and will be evaluated through Tuesday before the team makes a decision Wednesday whether he’ll start Sunday at Houston. ... Rookie RB Michael Carter, another bright spot, will be out two-to-three weeks with what Saleh said is a “mild” high ankle sprain. ... LB C.J. Mosley said he's fine after leaving the game late to be evaluated for a head injury.

141 — The number of yards receiving Moore had on eight catches against the Dolphins, the most by a Jets rookie since Rob Moore had 175 at New England in 1990.

The Jets have to make a decision at quarterback and then plan for a “showdown” with the Texans, who are also 2-8. This could end up going a long way in determining which team picks No. 2, with winless Detroit the front-runner for No. 1 in the draft.