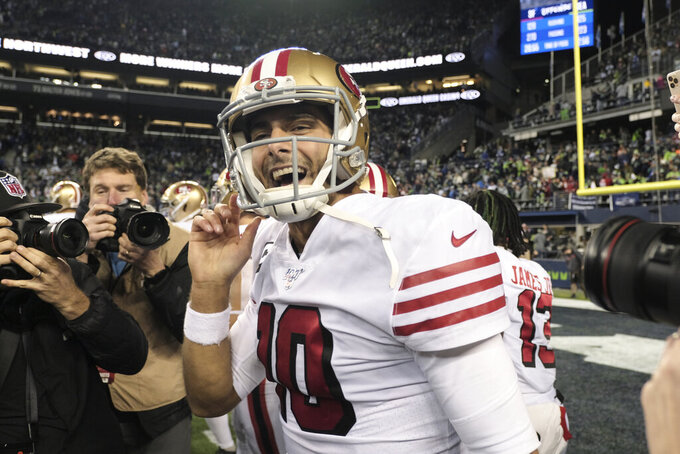 SANTA CLARA, Calif. (AP) — It took time for the vision of coach Kyle Shanahan and general manager John Lynch to lead to positive results on the field for the San Francisco 49ers.

The nine straight losses to begin the debut season in 2017 were followed by a 1-7 start to an injury-riddled 2018 campaign. With just 10 wins in those two seasons, the 49ers looked far from contender status.

But even while all the losses mounted, foundation pieces were being put in place that have translated to the success that helped San Francisco (13-3) win its first division title in seven years and earn the top seed in the NFC playoffs for the first time since 1997 in Year Three of the regime.

"There was always a confidence because of him and everyone having faith in him to steer this thing in the right direction," right tackle Mike McGlinchey said about Shanahan. “Three years after, we're reaping the rewards of what he's capable of doing. I think we're just scratching the surface, too. The more time we get with him the more time we get around the players, the system, the better I think everyone will be.”

The process started with Shanahan putting in his system and then the pieces followed.

There was the fortuitous trade for Jimmy Garoppolo midway through the first season that gave the team the leader at quarterback necessary for success in the NFL.

There were key free agent additions like shutdown cornerback Richard Sherman and versatile fullback Kyle Juszczyk that have proven integral.

It all added up to San Francisco celebrating a division title at its old house of horrors in Seattle in Week 17 with a thrilling win by the narrowest of margins that gave the Niners a much-needed week off with a playoff bye.

"It's just an incredible feeling," said Kittle, a fifth-round pick in 2017 who has developed into perhaps the league's top tight end. “Appreciation is a word is something that I feel. Just the hard work we put in the last three years finally amount to something that matters.”

That success hardly seemed inevitable back in training camp when Garoppolo struggled in his return from a major knee injury that sidelined him for most of the 2018 season and much of the attention in the NFC West was centered on the Los Angeles Rams, who had won two straight division titles and earned a Super Bowl berth.

But the Niners won their first eight games this season and never looked back.

"It's pretty incredible," Garoppolo said. “Especially just from the start of the season, all the hearsay and everything, our team and what we were going to do and to come out here and get the one seed — it's a pretty nice feeling. It's a step in the right direction, but we've still got a long way to go.”

Those pieces that were put in place the first two years were fortified this past year by players like No. 2 overall pick Nick Bosa, who has helped transform the defense; linebacker Dre Greenlaw, who made the tackle at the goal line that sealed the top seed; and receiver Emmanuel Sanders, who was acquired in a midseason trade from Denver to provide a needed upgrade to the passing game.

That helped form one of the league's deepest teams, one that has shown the ability to withstand injuries and win games a variety of ways, especially with clutch plays at the end, as evidenced by last-minute wins over New Orleans, the Rams and Seattle in December.

"They were already 7-0 before I got here, so I knew it was a good team," Sanders said. “When I got here, and being part of two Super Bowl teams, one loss and one win, I know what the DNA looks like, I know what the chemistry looks like, and I knew that they had it over here from the head coach and the GM to the quarterback to the players, the special teams players, the role players, and everything. I was excited, but I knew that we had a lot of big games. On paper it looks good, but we still have to put it together.”

None of the regular-season success will mean much if it isn't followed by similar play in the postseason. The 49ers will host Minnesota, Seattle or Philadelphia on Saturday, Jan. 11 in their first home playoff game since Colin Kaepernick ran through the Packers in the divisional round following the 2012 season.

A victory in that game would mean a berth in the NFC title game, which will also be played at Levi's Stadium.

"It feels good to get where we're at," Shanahan said. “Our goal was to get in the playoffs, it feels much better with being the one seed. By now everyone knows there is only one team that is happy at the end of year.”