Smith, Lynch locked in competition to back up Russell Wilson 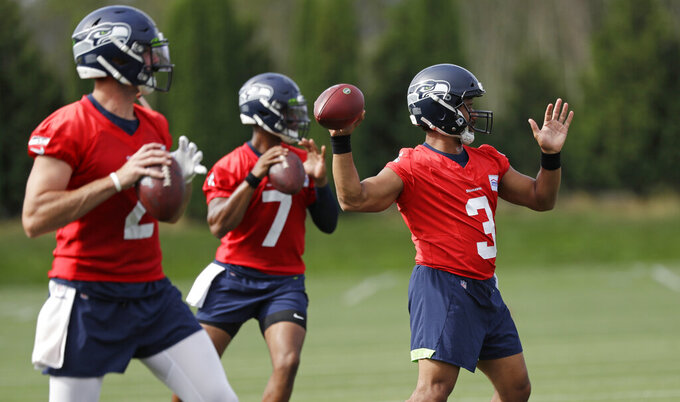 RENTON, Wash. (AP) — In the grand scheme of things, serving as the backup to Seahawks quarterback Russell Wilson is mostly meaningless.

A year ago, Wilson took every snap in the regular season and the playoffs. In 2017, backup Austin Davis took five snaps. In 2016, Trevone Boykin took 53 snaps, the most of any QB to have served as Wilson's backup in Seattle.

But it's still an important position and one the Seahawks will begin to get a better feel for when they open the preseason hosting Denver on Thursday night. The competition between Geno Smith and Paxton Lynch has provided flashes of promise as well as a few cringe-worthy moments.

"They understand it's going to be a tough competition. That goes a long way," offensive coordinator Brian Schottenheimer said. "Ultimately, it's going to come down to who can move the team and who can score points for us in the preseason."

Smith would appear to be the leader just based on his experience. Smith spent last season as a backup with the Los Angeles Chargers after the majority of his career was spent in New York with the Jets and Giants. He's five seasons removed from being a full-time starter with the Jets, but he has played in 40 career games — eight times more than Lynch.

"I got a lot of confidence in myself. I know that I can do a lot of things on the field," Smith said. "I believe that I am a starter, I just need another opportunity."

Lynch was a disappointment in Denver after being taken in the first round of the 2016 draft. He was released before the start of the 2018 season. He's started just four games in his career, with the Broncos winning only one. Seattle has been intrigued by Lynch's combination of size and running ability, but his passing has been inconsistent.

"I was sitting on the couch watching games last year, so just having the opportunity to be out here playing with a team and having teammates again and having guys and going to work every day has brightened me up and picked up my spirits a lot," Lynch said.

Considering the expectations that surround a first-round selection, spending last season out of football was humbling for Lynch. If he doesn't win the backup job, Lynch could be a practice squad candidate.

"It's hard doing something you love for so long and getting used to it season in, season out and then it kind of gets taken away from you," Lynch said. "But it gave me a really good opportunity to sit back and evaluate myself as a person and what I've done to this point, try to be grateful for the things that I had accomplished up to this point and I also took a lot of time to get better."

Seattle's mock game Saturday was a prime example of the mix of good and bad seen from both quarterbacks. Lynch didn't have any highlight plays, but completed 7 of 11 passes. Smith made some questionable throws — including a pass that bounced off the crossbar and was "intercepted" by Poona Ford and returned for a touchdown that didn't count — but he also led a touchdown drive on the final series of the scrimmage.

The serious evaluation begins Thursday and is likely to go through the final week of the preseason.

NOTES: LB Bobby Wagner underwent an undisclosed procedure on his knee that will keep him out a couple of weeks, coach Pete Carroll said Monday. "He has had the procedure before, it's not his first time," Carroll said. "The reason I'm not telling you what it is is because I don't know what it is. I would tell you if I knew." Wagner participated in the Seahawks' scrimmage over the weekend. ... Seattle is still trying to determine whether TE Ed Dickson needs surgery on his knee. Carroll said if Dickson does need surgery, it would likely be a six-week recovery. ... WR DK Metcalf may play Thursday after missing Seattle's scrimmage with an oblique injury.