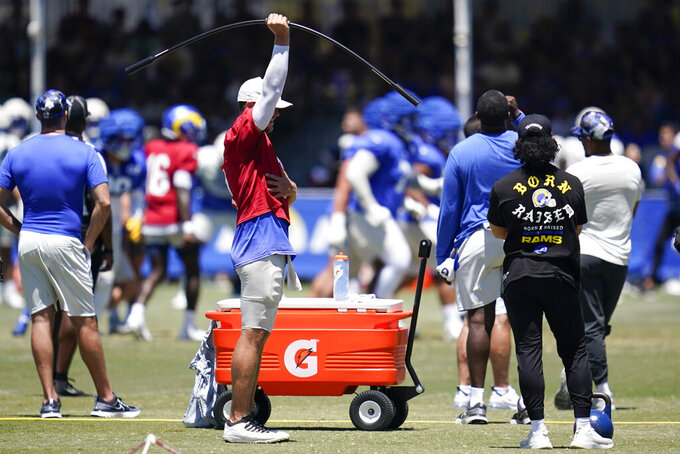 Matthew Stafford downplayed the significance of his elbow injury after demonstrating just how little it's holding him back in practice with the Los Angeles Rams.

Stafford participated extensively in the Rams' latest workout at UC Irvine on Saturday, making deep throws and building chemistry with his teammates in what was likely his most extensive work of training camp.

Afterward, Stafford said his right elbow condition is merely “irritating,” and not a threat to his ability to lead the Super Bowl champions' title defense.

“I just have a little soreness,” Stafford said. “We’re working through it. I felt pretty good today. I thought it looked pretty good. Just trying to be smart with it, and make me feel as good as I can feel going into Week 1 while still getting as many reps as I can, too.”

Stafford had elbow pain last season while leading the Rams to a championship in his first season with the team, and he had an unspecified injection in his elbow during the offseason. He didn't throw to receivers in practice during the offseason program, but he has been participating regularly in drills during camp despite a limited overall schedule.

Still, coach Sean McVay raised eyebrows Thursday when he said Stafford's injury was “abnormal” for a quarterback, likening it to injuries more often seen in baseball pitchers. Stafford again declined to go into specifics about his injury Saturday, but he says it's nothing he can't handle.

“I’m just going through something that is irritating at the moment, but I’m working through it,” Stafford said. "We've got a great plan. I’m feeling stronger every time I come out here and throw. I felt like I could make any throw I wanted to today. I’m just trying to be smart when I get those opportunities to make sure I can come out here, cut it loose, turn it loose like I did today and go from there.”

McVay pointed out that Stafford was making every throw during the Rams' workout Saturday. The coach doesn't use any of his key players in the preseason, so Stafford's first chance to demonstrate his arm in a game won't occur until Los Angeles' season opener on Sept. 8 against Buffalo at SoFi Stadium.

“The way that he looked today, I don’t think you would know that anything was going on,” McVay said. "He felt good, so I know that I’m going to sleep better tonight.”

The 34-year-old Stafford has 49,995 yards passing as he heads into his 14th season this fall, ranking him 12th in NFL history and fourth among active quarterbacks. He agreed to a contract extension through 2026 during the offseason, and he has no public doubt he'll be able to sling it for the duration of his commitment to the Rams and perhaps beyond.

“Anytime you put an arm through as much stress as I have over the years, it’s not going to look like (a regular person's) elbow, I’m sure,” Stafford said. "It’s not one of those things that ... the more I throw, the worse it’s going to get. It’s kind of just a balancing act at this point.”