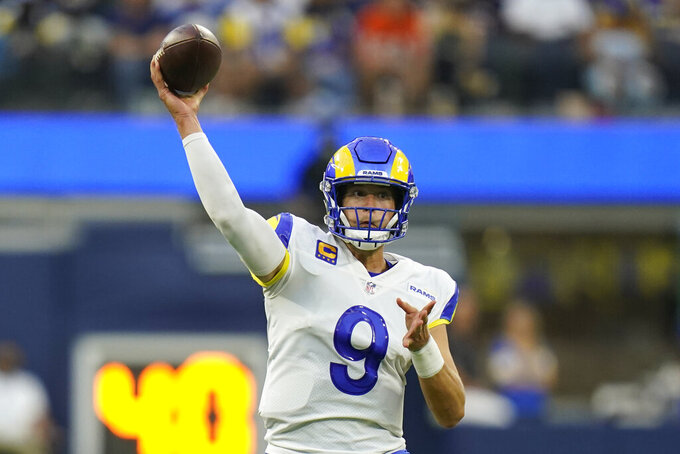 THOUSAND OAKS, Calif. (AP) — Matthew Stafford's debut with the Los Angeles Rams was so sharp that it could have left the quarterback and his head coach struggling to find areas for improvement in Week 2.

But Stafford and Sean McVay have both been in the NFL long enough to know no performance is perfect — and even if it was close, there's no point in admitting it.

They're moving forward to their road opener at Indianapolis this Sunday looking for even more production than Stafford provided in a momentous start that resulted in his first NFC Offensive Player of the Week award since way back in 2009 — his rookie season with the Detroit Lions.

Stafford said Wednesday that it's “kind of hard to articulate” what he needs to do better than he did while throwing for 321 yards and three touchdowns without an interception in the Rams' season-opening 34-14 victory over the Bears.

Sure, it wasn't perfect: Stafford went 20 for 26, and one of his incompletions could have been a touchdown pass to Robert Woods if he had finessed it a bit more.

But overall, Stafford produced arguably the best debut by a veteran quarterback in recent years. He is the first quarterback in NFL history to win his debut with a new team while passing for at least 300 yards and three touchdowns with no interceptions.

His 156.1 passer rating was close to perfect, and the Rams scored on six of his seven significant drives against a solid Chicago defense.

McVay also seemed rejuvenated as a play-caller in his first game since Jared Goff's departure, but the coach still came up with a list of areas for improvement by the Rams' offense, which didn't play together in any preseason games.

McVay cited the Rams' performance on third down as an issue, although he blamed it partly on his his own play-calling. Los Angeles was 0 for 4 on third down in the first half, but still finished 6 for 11 and converted its only fourth down attempt.

As for Stafford's play, McVay struggled to find a flaw, citing only nebulous thoughts about body positioning and passing form. McVay is clearly thrilled by Stafford's deep-ball throws, including a 67-yard TD pass to Van Jefferson and a 56-yard TD pass to Cooper Kupp, knowing they're an element he desperately wanted to add to his offense when he traded Goff for Stafford.

“It was definitely a good, clean start,” McVay said. “But I think he’d be the first to tell you that, ‘Hey, did a lot of really good things, which was definitely represented in some of the success we had all offensively, but can do some things better as well.'”

Stafford's next assignment is to attack an Indianapolis defense that gave up four touchdown passes by Russell Wilson in its 28-16 loss to Seattle.

The Rams hope to get more receivers involved against the Colts after Jefferson, Woods and DeSean Jackson combined for only seven catches. In fact, Los Angeles threw the ball only 26 times against Chicago, making Stafford's achievements even more impressive.

To anybody but Stafford, that is.

“It’s a nice thing, but it’s one week," Stafford said of his player-of-the-week award. “It’s one game. Played plenty of good games in my career. Played plenty of bad ones. Just trying to make sure I play a bunch of good ones in a row.”

NOTES: Three defensive tackles missed parts of practice Wednesday. Sebastian Joseph-Day sat out and A'Shawn Robinson was limited, both due to knee injuries. Aaron Donald took his usual veteran rest day. ... McVay confirmed his punt returner is rookie Tutu Atwell. Kupp was back on Chicago's only punt last Sunday, but McVay said that was because the Rams were backed up to their goal line and knew they couldn't mount a return. Atwell, the speedy second-round pick, is likely to struggle for playing time on offense unless one of Los Angeles' top four receivers gets injured, so special teams will be his showcase for the moment.