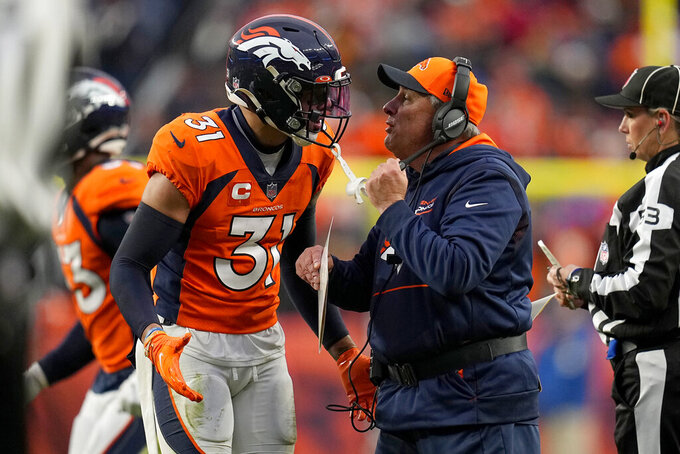 DENVER (AP) — Brandon Staley gets to face his mentor and maybe even his star pupil Sunday.

Staley's Los Angeles Chargers (6-4) visit Vic Fangio's Denver Broncos (5-5), who hope to get pass rusher Bradley Chubb back from a surgically repaired ankle that has sidelined him for two months.

Before Staley became one of the top young coaches in the NFL, Fangio saw his potential and hired him in 2017 as the Bears' outside linebackers coach. Fangio took Staley with him when he left Chicago to become the Broncos' head coach in 2019.

Staley immediately took a liking to Chubb, but they would spend just four games together before Chubb sustained a season-ending knee injury.

When Chubb returned in 2020 to embark on a Pro Bowl comeback, Staley was burnishing his head coaching credentials by leading the Rams' top ranked offense as their coordinator, a performance he parlayed into the Chargers' head coaching job this year at age 38.

Staley said he wouldn't have gotten the gig were it not for Fangio and Chubb.

Winning Fangio over in that first interview in Chicago “changed me and I'm forever grateful,” said Staley, who found another life changer in Chubb.

Staley said having only four games together is one of his biggest career regrets. He was Chubb's biggest fan last year when Chubb capped his comeback with a tearful Pro Bowl berth, and he's eager to see him return from his ankle operation even if that makes life harder for Chargers quarterback Justin Herbert on Sunday.

“I'm looking forward to him getting back on that field where he belongs,” Staley said. "He's one of the top rushers in the game and I'm just praying that he gets back fast. He means a lot to me. He's the best of the best.”

Fangio said Chubb will be a game-time decision. If he plays, he'll be limited to 20 snaps or so, enough to help the Broncos set the edge as they try to throttle running back Austin Ekeler, who scored four times in a win over Pittsburgh last week.

Broncos WR Courtland Sutton is happy with his paychecks if not his production of late. He gave GM George Paton a bear hug this week after signing a four-year, $60 million extension two days after teammate Tim Patrick signed a three-year, $30 million deal.

The Broncos haven't been targeting Sutton a lot lately. He's only been thrown to 14 times total since having a season-high 14 passes thrown his way against the Raiders last month. In the last two games, he's had five targets and three receptions for 38 yards.

Ekeler expects to have a large contingent of family and friends in the stands. The Chargers running back grew up in Eaton, Colorado, and attended Western Colorado before signing as an undrafted free agent in 2017.

Ekeler is coming off a career-high four touchdowns in last Sunday’s win over Pittsburgh, and is second in the league with 13 TDs from scrimmage. He is averaging 97.3 scrimmage yards per game and has already established a career single-season high in rushing yards with 573.

The Chargers are still last in the league in run defense, but they have made strides since the bye week by allowing 3.69 yards per carry. They were surrendering 5.45 yards in the six games before their bye.

Los Angeles has struggled against teams that have two strong running backs, however. The Broncos feature Melvin Gordon III and rookie Javonte Williams, who have combined for 1,333 scrimmage yards and nine touchdowns to go with a 4.7-yard average per carry.

The Chargers have five comeback wins in the fourth quarter this season, but last year they blew a 21-point lead in Denver, losing on the final play when Drew Lock hit KJ Hamler for a 1-yard TD.

“Oh yeah, I remember that one. I was sitting at home because I had my hamstring (problem),” Ekeler said. “I just remember doing pushups after that game. I was just so mad. I don’t know why. For whatever reason, when I get mad, I have to vent. I have to start working out.”

With LT Garett Bolles still on the COVID-19 list and RT Bobby Massie (ankle) ailing, the Broncos will likely face Joey Bosa with backup tackles Calvin Anderson and Cam Fleming. And with S Kareem Jackson bothered by a neck/shoulder injury, rookie Caden Sterns is expected to make his first start.