For Steelers assistant Austin, a long and mysterious wait 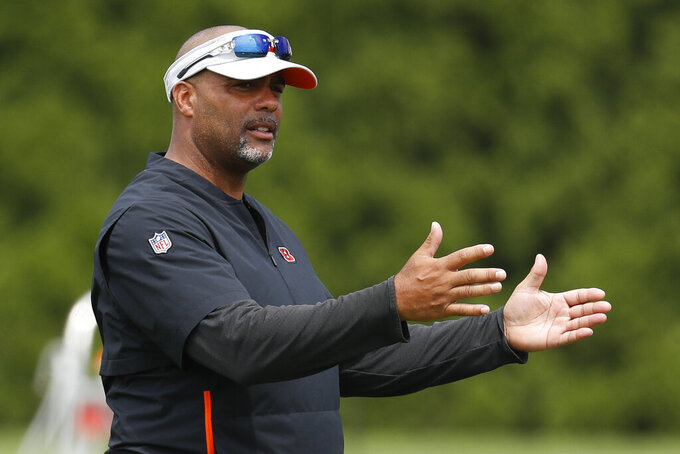 FILE - Cincinnati Bengals' Teryl Austin participates during NFL football practice in Cincinnati, July 26, 2018. Teryl Austin has been where Brian Flores currently is many times. Eleven to be exact. That's the number of head coaching interviews the Pittsburgh Steelers senior defensive assistant has had through the years, some of which made Austin feel as if he was only there to check a box. (AP Photo/John Minchillo, File) 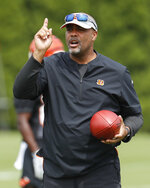 PITTSBURGH (AP) — Teryl Austin has been where Brian Flores is many times. Eleven to be exact, but who's counting?

It's hard not to when you walk into the office of an NFL general manager in hopes of landing the head coaching job you've always wanted — a job you believe you're qualified for — on nearly a dozen occasions, only to eventually get the dreaded “thanks but no thanks” phone call. Every single time.

“It's a lot,” the Pittsburgh Steelers senior defensive assistant coach told The Associated Press in October.

At least Flores, who filed a lawsuit against the NFL over alleged racist hiring practices on Tuesday, has had a turn at the wheel. He spent three seasons in Miami, managing two winning records, before getting fired in January for what team owner Stephen Ross described as a lack of synergy between Flores and the front office.

The 54-year-old Austin has been a defensive assistant on three teams that reached the Super Bowl — earning a ring with Baltimore after the 2012 season. He worked as defensive coordinator for two others, a number that could tick up to three if he is tabbed to replace Keith Butler, who stepped down from the position in Pittsburgh last month.

Still, 0 for 11. It's a number difficult for Austin to get his head around.

“It always leaves you wondering what happened, why you didn’t get it,” he said. "You can’t say for sure (if race was a factor). ... Maybe I’m not what the owners see when they look in the mirror and they see leadership positions.”

Austin landed in the NFL in 2003, the same year “The Rooney Rule” was adopted by the league in an attempt to promote diversity. The rule originally required teams to interview at least one person of color for head coaching vacancies, and has been expanded to general manager and other front-office positions. Austin appreciates the intent of the rule, even if that means there were times when he was interviewed just so a team could “check a box.”

“Because I think I’ve had 11, I can tell when one was just an (expletive) interview and I could tell when I was really in it,” he said. “And so to me, that’s kind of worth it.”

That doesn't mean the meetings that felt merely performative didn't sting. He sat down with the Detroit Lions in 2018 to talk about replacing friend and mentor Jim Caldwell. Austin spent four years as the team's defensive coordinator under Caldwell, a span in which the Lions were a respectable 36-28. Detroit instead opted to bring in then-Patriots assistant Matt Patricia.

“(Former Lions general manager) Bob Quinn knew he was hiring Matt Patricia and used Teryl to comply with the Rooney Rule,” Austin's agent Eric Metz said in a note to the AP on Wednesday. “Didn’t work out well for the Lions. Never should’ve fired Jim Caldwell.”

Other experiences were different. He finished as runner-up to Anthony Lynn when Lynn was hired to coach the Chargers in 2017 and Metz points out his client and longtime friend received “rave reviews of Teryl's interviews. His leadership, communication and coaching acumen were extremely impressive."

Yet Austin is still waiting for his first head coaching opportunity, his frustrating journey one of several detailed by Flores in court filings. Asked Wednesday if he wanted to revisit his talk with the AP following Flores' decision to sue, Austin said through a Steelers spokesman he stood by his original comments.

Maybe it's fitting. Because from where Austin sits, the league remains in much the same position now as it was when the Seattle Seahawks hired him to coach defensive backs in 2003. Back then, he thought he had a bead on what it would take to become a head coach: Excel as a position coach, then get promoted to coordinator and crush that job, too.

So that's what Austin did, first for Seattle, then Arizona and Baltimore before calling the plays in Detroit and Cincinnati. Only somewhere along the way, he believes “the goal posts moved.”

“It’s like, ‘We’re going to go this way now?'” Austin said. “So what’s that do? That cuts out a lot of guys who have worked their way up and become coordinators, because most of the (Black) coordinators for us have been on defense, not on offense.”

Austin understands the shift in a league where the ever-evolving rules are designed to put points on the board and fans in the seats. He'd like to see more opportunities for Black coaches to become offensive coordinators. Currently, there are only two: Kansas City's Eric Bieniemy and Tampa Bay's Byron Leftwich, both of whom are former players.

Not many, which makes the math easy and explains to Austin why, at the moment, there is just one Black head coach in the NFL: Mike Tomlin, who happens to be Austin's boss.

Austin feels the NFL Players Association and the Fritz Pollard Alliance need to simply keep attacking the problem, reinforcing that only because a candidate might be receiving an interview to help a team comply with the Rooney Rule doesn't mean the candidate isn't qualified.

That's just part of the battle, however. Figuring out a way to navigate the politics of the hiring process is another matter entirely.

“It’s tough when you’re going into a job, and (people) go, ‘This guy is a favorite for a job’ and before you ever walk into an interview, you’re fighting an uphill battle,” he said. “That’s something that has to change.”