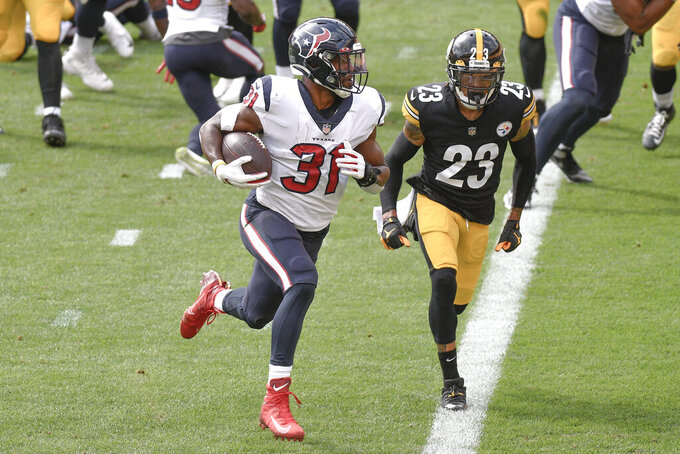 Houston Texans running back David Johnson (31) gets past Pittsburgh Steelers cornerback Joe Haden (23) to score a touchdown during the first half of an NFL football game, Sunday, Sept. 27, 2020, in Pittsburgh. (AP Photo/Don Wright)

HOUSTON (AP) — The Houston Texans don’t have much reason for optimism after Sunday’s loss at Pittsburgh left them 0-3 for the second time in three seasons.

The good news for the Texans is that they only need to look to the 2018 season to see the blueprint for a turnaround after a winless start. That year Houston reeled off nine straight wins after dropping the first three games and went 11-5 to win the AFC South.

Coach Bill O’Brien isn’t putting too much stock in the fact that they’ve dug themselves out of the same situation before and is simply focused on making sure his team plays better.

“Every year is different,” he said. “There’s not much you can take from that year... we’ve opened up against three very good teams and we haven’t obviously done enough to win any of those games. We did a lot of things (Sunday) that were decent but not enough and we just have to really build on the things we’re doing well and really correct the things the things we’re not doing well.”

Quarterback Deshaun Watson played great before halftime on Sunday to help the Texans to a 21-17 lead. But he threw an interception and struggled to move the offense as Houston was shutout in the second half of the 28-21 loss.

Despite the tough start, Watson is confident that Houston can turn things around.

“We are what we are, 0-3 but there’s a lot of positivity in this and we can’t dwell on negativity,” he said. “We’ve got a lot more football to go... so it’s a lot of opportunities out there. We’ve got to keep building and keep pushing forward. I can’t let myself get discouraged.”

In his first season without DeAndre Hopkins, Watson has done a good job of spreading the ball around. He completed passes to seven receivers in each of the past two games and Houston has had a different player lead the team in yards receiving in its first three games.

The Texans are searching for ways to improve their run defense after giving up 565 yards rushing this season, which is the most in the NFL. Houston has done a decent job of stopping the run in the first three quarters of its past two games but has struggled to contain runners in the fourth.

“I don’t know why we can play the run well early on and not finish it,” defensive end J.J. Watt said. “So, I need to get that answer so we can figure it out ... (because) you’re going to lose football games and we are losing football games, and we need to win.”

First-year Texan Randall Cobb had four receptions for a season-high 95 yards and his first touchdown on Sunday.

Watson said he’s starting to develop better chemistry with his new targets such as Cobb now that he has some games under his belt.

“We’re growing,” he said. “We keep growing and we keep working. We keep building.”

Safety A.J. Moore injured his hamstring on Sunday and O’Brien said he isn’t sure of his status against the Vikings.

0 — The Texans are the only team in the NFL that has not forced a turnover this season.

The Texans must figure out how to fix their running woes on both sides of the ball if they hope to get their first win on Sunday when they host the Vikings, who are also 0-3. The Vikings have also had trouble stopping the run and are allowing almost 148 yards rushing a game. But their running game has been much better than Houston’s and the Texans will have their hands full trying to slow down Dalvin Cook, who ranks third in the NFL with 294 yards rushing.