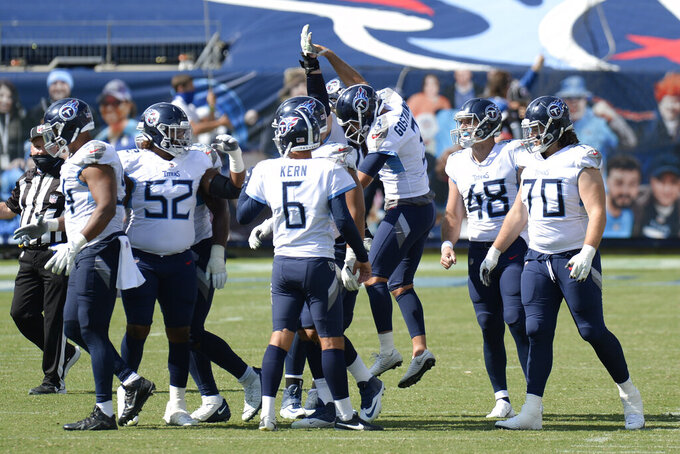 Tennessee Titans kicker Stephen Gostkowski (3) celebrates after kicking a 49-yard field goal against the Jacksonville Jaguars in the fourth quarter of an NFL football game Sunday, Sept. 20, 2020, in Nashville, Tenn. The kick gave the Titans a 33-30 win. (AP Photo/Mark Zaleski)

NASHVILLE, Tenn. (AP) — Another week, another game-winning drive in the fourth quarter. The Tennessee Titans are making a habit of scoring late to pull off a win.

Then they needed Harold Landry III's leaping interception of a batted ball to seal a 33-30 victory.

“We don't want to end every game in that situation,” Ryan Tannehill said Wednesday. "But I have a lot of confidence that if it does come up again, which it probably will — we got a lot of games left here — that our confidence is strong going into that.”

Tannehill is a big part of why the Titans' confidence in late-game moments is so strong. The 32-year-old quarterback has led them on game-winning drives in the fourth quarter or overtime five times since becoming the starter last October.

He came to Tennessee from Miami with 13 such drives through his first six seasons with the Dolphins. Once he took over as the Titans' starter, Tannehill drove them on late drives to beat the Chargers, Buccaneers and the Chiefs, with each win capped by a touchdown pass.

The Titans visit Minnesota (0-2) on Sunday. Tennessee is 11-4 since Tannehill took over as the starter, including playoffs. The comebacks have helped players gain confidence in each other, and more practice also has improved their chemistry and timing.

Tannehill said the odds are slim that a team will actually score every single time.

“But that confidence in and the mentality that we’re going to do it every single time, that doesn’t change,” Tannehill said.

Being able to execute with the game on the line isn't something the Titans take for granted. Coach Mike Vrabel said they show examples of how other teams handle late drives throughout the week and how that could look for the Titans. Then they go out and practice being in those late-game situations.

“Do we need a touchdown? Do we need a field goal?” Tannehill said. "We’ve got so many reps of different situations there and, you know, it feels like it’s really paying dividends now.”

NOTES: Six Titans did not practice Wednesday: WR A.J. Brown (knee), CB Malcolm Butler (quad), CB Chris Jackson (hamstring), RT Dennis Kelly (illness), TE Jonnu Smith (ankle) and OLB Derick Roberson (illness). OLB Vic Beasley Jr. practiced fully. He has yet to make his Tennessee debut while recovering from a knee that kept him on the non-football injury list until Sept. 5. Rookie RB Darrynton Evans (hamstring) practiced fully, too. He also has yet to play this season. ... The Titans signed RB Jeremy McNichols to the roster from the practice squad and put RB Senorise Perry on injured reserve. McNichols played in each of the first two games.