Titans back to work, looking to be healthier after bye week 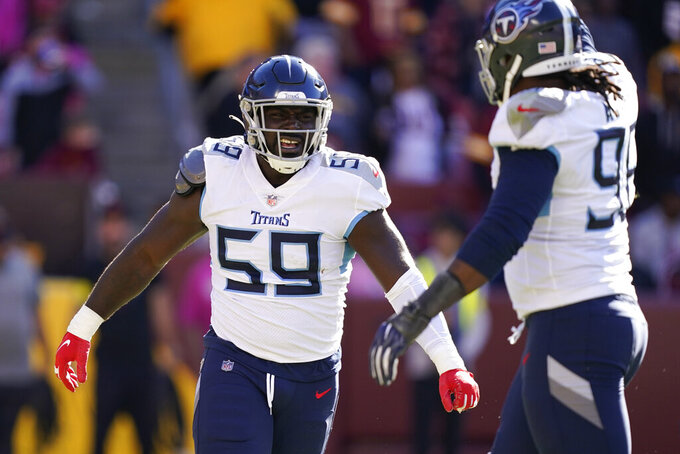 NASHVILLE, Tenn. (AP) — Tennessee Titans coach Mike Vrabel hopes to get outside linebacker Bud Dupree back for Sunday's game with the Indianapolis Colts.

A bye and a long weekend off, even if it comes at the first opportunity in the NFL schedule, has to do something good for a banged-up team right?

“We will see,” Vrabel said Monday. “We have had a couple of days off. Hopefully the guys feel better and healthier. We are ready to work and get something done.”

The Titans (3-2) returned to work Monday rested and still on top of the AFC South, though Indianapolis (3-2-1) has won two straight since Tennessee beat the Colts 24-17 on Oct. 2 in Indiana.

The Titans' three-game win streak still has them atop the division they've won each of the past two years.

Vrabel used Monday as an extra day of practice to work on a few things. That might include looking at options at left tackle after Dennis Daley struggled protecting Ryan Tannehill in Tennessee's road win at Washington when the quarterback was sacked five times and hit repeatedly.

Daley, acquired in a trade with Carolina, replaced three-time Pro Bowler Taylor Lewan who was placed on injured reserve in September after hurting the same right knee for the second time in three seasons.

“I think we have to consider a lot of options throughout the roster,” Vrabel said.

Getting Dupree back would be a big help for the defense. The Titans already lost Pro Bowl outside linebacker Harold Landry III to a torn ACL on Aug. 31. Dupree has been struggling with an injured hip that has limited him to three games, and he played only a combined 21 snaps in two of those.

Outside linebacker Rashad Weaver, tied with Denico Autry for the team lead with four sacks, said having Dupree back on the field will make him more comfortable as a veteran he can look to for help.

“That’s one of our biggest leaders in the room, our top guys,” Weaver said. “And so any time you bring a guy back like that the team and in your room, it should elevate everybody around you and the team.”

But the Titans got thinner at outside linebacker Monday, placing Ola Adeniyi on injured reserve after a neck injury kept him out of the past three games. Tennessee replaced him on the roster by signing defensive back Josh Thompson off Jacksonville's practice squad.

The challenge is the Titans have played only five games. Two-time All-Pro Kevin Byard says guys should be fresh coming off this bye, flying around and having fun.

“Obviously coming off a bye week, some guys need to get away, refresh their minds or whatever,” Byard said. “But like this being so early in the year, guys should be fresh and ready to go out there.”

NOTES: The Titans made a handful of roster moves Monday, including releasing veteran wide receiver Josh Gordon. Vrabel said they gave him an opportunity and “and just didn’t see enough there so we went with another player.” They signed WR C.J. Board to the practice squad, a Clarksville native who played at Chattanooga. Board has 17 catches for 183 yards in stints with Jacksonville, Cleveland and Baltimore.