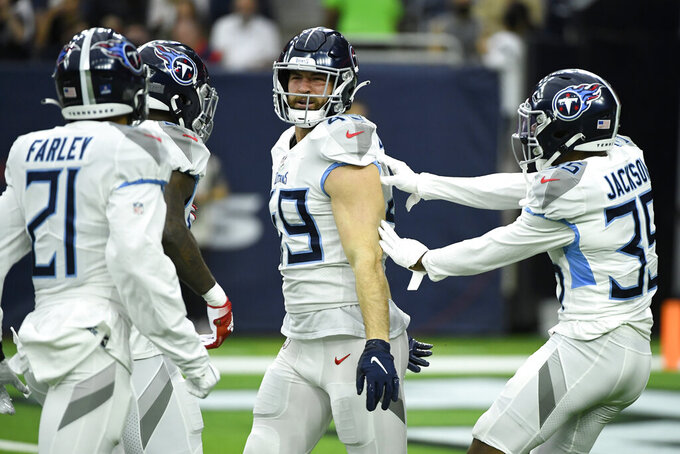 Tennessee Titans linebacker Nick Dzubnar (49) and defensive back Chris Jackson (35) celebrate a play against the Houston Texans during the first half of an NFL football game, Sunday, Jan. 9, 2022, in Houston. (AP Photo/Justin Rex ) 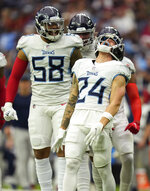 NASHVILLE, Tenn. (AP) — Tennessee linebacker Bud Dupree feels as good as he's been all season and possibly is as healthy as he's been in well over a year.

That could go for the rest of his Titans defensive teammates.

And the timing couldn't be better with Tennessee (12-5) hosting Cincinnati in an AFC divisional game Saturday.

“Right at the right time,” Dupree said. “I feel like everything’s coming together. ... For me just getting back healthy and trying to peak at the right moments, and I feel like right now during this time right here will be one of my best games.”

Dupree spent his first season with the Titans working back into shape from the right ACL he tore in December 2020 with Pittsburgh. He started the season opener only to realize his desire to help his new team helped him ignore that his knee wasn't where he wanted. He wound up starting six of 11 games played.

He's not the only Tennessee starter to miss games.

While the Bengals (11-7) are dealing with injuries on their defensive line, Tennessee is healthier on defense than it's been in months. In a season where the Titans used 91 players — most in a non-strike season — they also led the league in using 43 players on defense. Cincinnati was fourth with 39.

Only All-Pro safety Kevin Byard, outside linebacker Harold Landry III and defensive tackle Jeffery Simmons started every game during the regular season. That forced coaches to mix and match while getting new additions up to speed quickly.

Defensive coordinator Shane Bowen says that helped the Titans develop depth. With so many playing, the Titans also have a wider range of skillsets to use giving them flexibility for different downs and distances.

“There's places where guys can go in the game and do some different things based on what we're doing defensively, what they're doing offensively and how we see fit, so that's grown and now that we got guys back we've kind of developed some of those guys where they might have a role,” Bowen said.

The Titans finished second against the run, sixth in allowing 20.8 points a game, seventh inside their 20 in allowing touchdowns at a rate of 51.7% of such trips, tied for ninth with 43 sacks as well as 12th in allowing 329.8 yards per game.

They joined the Buffalo Bills and New Orleans as the only defenses to rank in the top 12 for points allowed, sacks, third down efficiency, red zone efficiency and total yards per game.

Dupree said playing all season with Denico Autry (nine sacks) and Landry (career-high 12 sacks) means they all know how to work together with Simmons. They also know who tends to draw one-on-one blocking.

“Coming into the playoffs, it’s always great to have that information so you can capitalize on the moments,” Dupree said.

Byard says the Titans are a confident group playing their best when it matters.

“The guys on the front seven, those guys are hungry and those guys are making plays ...,” Byard said. “It makes jobs easier for us on the backend, so it’s been fun, for sure.”

NOTES: Coach Mike Vrabel said the Titans will make a decision on Derrick Henry's status Friday. Henry has practiced with the Titans since Jan. 5, but must be moved off injured reserve to play Saturday. ... DL Teair Tart, who has started 10 games, is the only player questionable for Tennessee with an ankle injury. DL Naquan Jones (knee) practiced fully for a third straight day. Jenkins (ankle) practiced fully Thursday after sitting out Wednesday. ... Bengals WR Stanley Morgan (hamstring) is the only Cincinnati player questionable after being limited all week.