Titans DL Jeffery Simmons back after missing one game 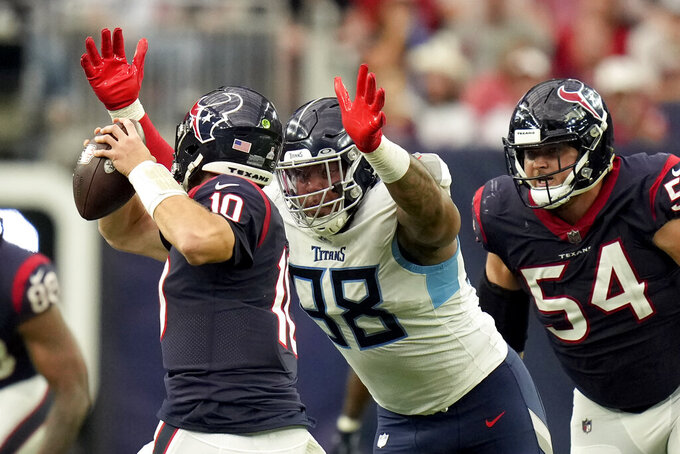 GREEN BAY, Wis. (AP) — The Tennessee Titans will have Jeffery Simmons back for their Thursday night matchup with the Green Bay Packers after the Pro Bowl defensive lineman missed one game with an ankle injury.

Simmons wasn’t included among the Titans’ list of inactive players. He had been listed as questionable on the injury report Wednesday after sitting out Tennessee’s 17-10 victory over the Denver Broncos on Sunday.

The Packers will have wide receiver Randall Cobb available after activating him from injured reserve.

Cobb has missed Green Bay’s past four games with a high ankle sprain.

The Titans won’t have kicker Randy Bullock (calf), outside linebacker Bud Dupree (hip), safety Amani Hooker (shoulder), defensive back Lonnie Johnson (hamstring) and center Ben Jones (concussion). All of them already had been ruled out Wednesday.

Tennessee signed Josh Lambo to the practice squad Tuesday and activated him Wednesday to handle the kicking duties in this game.

Also inactive for the Titans are cornerback Elijah Molden, tight end Kevin Rader and defensive tackle Naquan Jones. Molden had been listed as questionable Wednesday with a groin injury.

Johnson was placed on injured reserve Thursday, a move that means he must miss at least four games. The Titans added wide receiver C.J. Board to their active roster.

Campbell (knee) and Doubs (ankle) already had been ruled out Wednesday, while Jean-Charles (ankle) had been listed as doubtful. Campbell is missing a third straight game and Doubs is sitting out a second straight game.

The Packers will have offensive tackle David Bakhtiari and guard Elgton Jenkins available. Both had been listed as questionable.