Titans to honor officers who responded to Christmas bombing 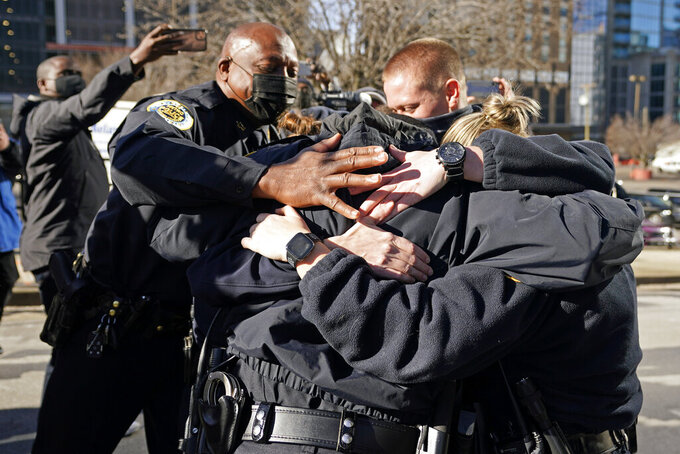 Nashville Police Chief John Drake, left, joins a group of police officers as they embrace after speaking at a news conference Sunday, Dec. 27, 2020, in Nashville, Tenn. The officers are part of a group of officers credited with evacuating people before an explosion took place in downtown Nashville early Christmas morning. (AP Photo/Mark Humphrey)

NASHVILLE, Tenn. (AP) — The six first responders who evacuated residents before the Christmas Day bombing in downtown Nashville will be the “Honorary 12th Titans” for Tennessee’s home game on Sunday against the Baltimore Ravens.

“While we can never thank these officers enough for their heroic acts, it is an absolute privilege to have the opportunity to honor them at the game on Sunday,” said Titans president and CEO Burke Nihill in a statement.

According to a news release, the six men and women — Officers Brenna Hosey, Tyler Luellen, Michael Sipos, Amanda Topping, James Wells and Sergeant Timothy Miller — will not only attend the game but also plunge a sword into the field to mark the countdown to kickoff.

Titans players will continue to done the “615 Strong” helmet decal during the game, in a nod to the city’s area code. The number six is colored in Titans light blue to honor the six officers.