Titans need win against Texans on Sunday for playoff berth 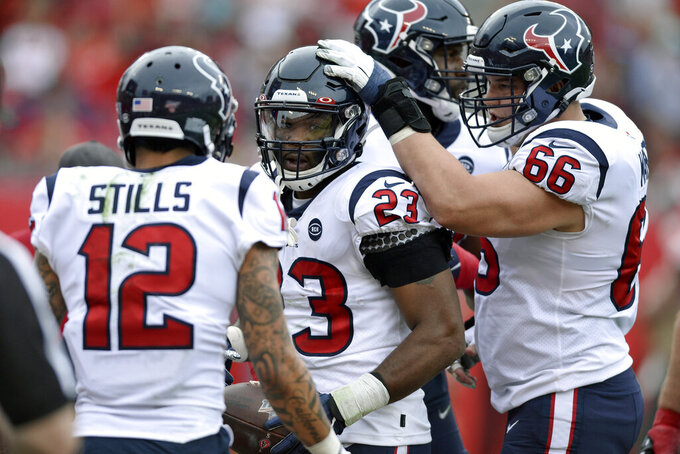 Houston Texans running back Carlos Hyde (23) celebrates with wide receiver Kenny Stills (12) and center Nick Martin (66) after his 1-yard touchdown run against the Tampa Bay Buccaneers during the first half of an NFL football game Saturday, Dec. 21, 2019, in Tampa, Fla. (AP Photo/Jason Behnken)

HOUSTON (AP) — Though there are several ways the Tennessee Titans could secure a playoff berth on Sunday, they're intent on doing it by beating the Houston Texans so they don't have to rely on anyone else.

"The focus and the mentality is that now we're playing playoff games," coach Mike Vrabel said. "When you win in the playoffs, you go find another game. When you lose, your season's over. So, that's really the mindset that we have to take and the approach that we have to take."

Beating the Texans would be the most straightforward path to Tennessee's second postseason appearance in three seasons, but there are other ways the Titans could wrap up a spot. Tennessee could get in with a tie against Houston and a loss or tie by Pittsburgh against Baltimore. They would also get a wild-card spot if Pittsburgh loses and Indianapolis loses to or ties with the Jaguars on Sunday.

"This team wants to win and we definitely want to get into the postseason, so obviously, we were just saying how crucial this game is," Tennessee quarterback Ryan Tannehill said. "The onus is on us to go out and play well."

This is the third straight season where Tennessee has a chance to secure a playoff spot with a win in the regular-season finale. They got a win over the Jaguars in 2017 to reach the playoffs and beat the Chiefs the following week, but coach Mike Mularkey was fired after a divisional loss at New England.

Last season a banged-up Titans team without quarterback Marcus Mariota, among others, lost to the Colts in Week 17 to end the season.

Sunday will be the second meeting between these teams in three weeks after the Texans got a 24-21 win in Nashville in Week 15.

"There's a lot of things that are going to be similar," Vrabel said. "I'm sure that there'll be a few game plan things that both of us have that we'll have to make adjustments on when we see them in the game."

Houston secured its fourth AFC South title in five seasons with a 23-20 victory over Tampa Bay last week. Since the Texans have already locked up a playoff spot, there is some speculation that they could rest some starters on Sunday. However Vrabel, who worked for Houston coach Bill O'Brien from 2014-17, believes that O'Brien will play everyone.

O'Brien has been cagey about whether he'll rest anyone on Sunday and repeatedly refused to directly answer the question this week.

Tannehill is completing 70.7% of his passes and averaging a league-best 9.6 yards per attempt. The eight-year veteran has never played in the postseason, and is more concerned about getting the win than statistics.

Houston running back Carlos Hyde ranks 10th in the NFL with a career-high 1,057 yards rushing this season. It's the first 1,000-yard rushing season for Hyde, who is in his sixth NFL season. Hyde was acquired from Kansas City on Aug. 31 and has been a key addition filling in for Lamar Miller, who sustained a season-ending knee injury in the preseason.

"I think everything in this game really is about fit and he's a really good fit for us the way that he runs, his running style, his personality," O'Brien said. "He came into this year very focused when we traded for him ... I like the way he runs the ball, he gets behind his pads, he's got good vision and some of the things that we do in our running game fit him very well."

HOW LONG HAS IT BEEN?

The Titans have not won in Houston since the end of the 2011 season, a 23-22 victory on Jan. 1, 2012. Only defensive lineman Jurrell Casey and Pro Bowl punter Brett Kern are still with the franchise. Casey had one of his 50 sacks in that game on Jake Delhomme.

The Titans aren't happy with where they are defensively after starting the season not allowing an opponent to score more than 20 points in any of the first seven games. They've dipped from being the NFL's No. 3 scoring defense to 13th, giving up 21.1 points a game. The Titans also are coming off a game where they allowed a season-worst 38 points in a loss to New Orleans. Casey said it's time for the defense to play the way it was earlier with the season on the line.

"It's definitely frustrating because we were a defense that wouldn't give up 14 points, and now we're letting teams score 30, 40-something points on us," Casey said. “It's definitely disappointing, and we have to get back to Titan ball, which is 14 or less points.”