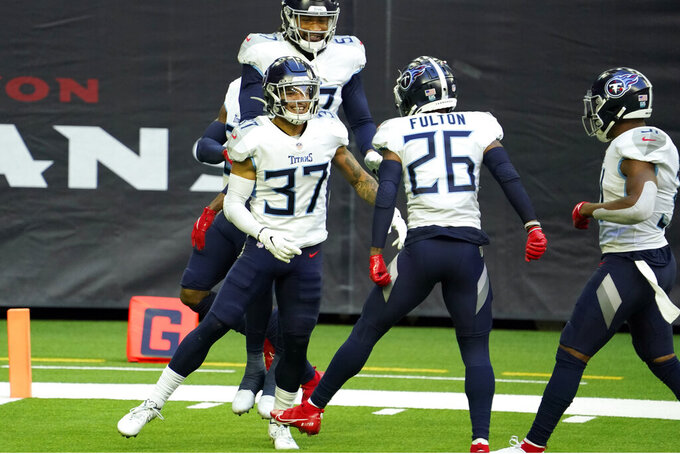 Tennessee Titans' Amani Hooker (37) celebrates with teammates after intercepting a pass during the first half of an NFL football game against the Houston Texans Sunday, Jan. 3, 2021, in Houston. (AP Photo/Sam Craft)

NASHVILLE, Tenn. (AP) — Postseason means a fresh start, and the Tennessee defense may be the unit most in need of just that opportunity.

The Titans (11-5) won the AFC South almost in spite of a defense that ranked among the NFL's worst in several categories. Tennessee's high-scoring offense helped cover up the unit's flaws much of the season.

Now the Tennessee defense gets a chance Sunday to show how it can help out Derrick Henry and Ryan Tannehill.

The challenge is significant. The Titans have to slow down Lamar Jackson and a Baltimore offense that is the NFL's best rushing unit. Tennessee didn't deal very well with Deshaun Watson last week, giving up 20 straight points and needing a field goal to pull out a win in Houston for the AFC South title.

Byard repeated the same thing he said a week ago after a 40-14 loss in Green Bay. The Titans gave up too many big plays. Byard, who led Tennessee with 111 tackles, says the Titans work best when they make opponents earn every yard they get and get some turnovers.

“We have to make teams earn everything that they get, not giving them anything,” Byard said.

Getting turnovers is one thing the Titans have done very well this season. Malcolm Butler and Amani Hooker each had four interceptions, putting them in a group tied for seventh most in the NFL this season. They came up with 15 interceptions and forced 11 fumbles, recovering seven.

With how well the Titans took care of the ball, Tennessee led the NFL with a plus-11 turnover margin.

But Tennessee also allowed a 51.4% conversion rate on third down. The Titans managed to avoid finishing last in the league for sacks only because they got four in Houston. Still, they have 19 — the fewest sacks by a playoff team since the 1979 Denver Broncos who also had 19.

Baltimore coach John Harbaugh is going by what he's seen having lost to Tennessee 30-24 in overtime on Nov. 22. In that game, Harold Landry got the Titans' second sack in overtime helping force the Ravens into a three-and-out.

The first time these teams met, the Titans limited the Ravens to 129 yards rushing and 306 yards overall even as Baltimore converted 60% of its third downs (9 of 15). Tennessee also came up with three turnovers.

Titans coach Mike Vrabel knows what his defense has done this season. He didn't hire or name a coordinator for the unit after Dean Pees retired last January, a day after Tennessee lost in the AFC championship. Outside linebackers coach Shane Bowen makes the calls during games.

Vrabel said what the Titans need to do on defense now in the playoffs is simple.

“Prepare, perform, make adjustments as they come up in the game," Vrabel said. “Understand the opponent that we have. We’re excited. This is a great challenge.”

Like every defense, the Titans have one end goal: Getting the ball back somehow, someway for an offense that scores 30.7 points a game.