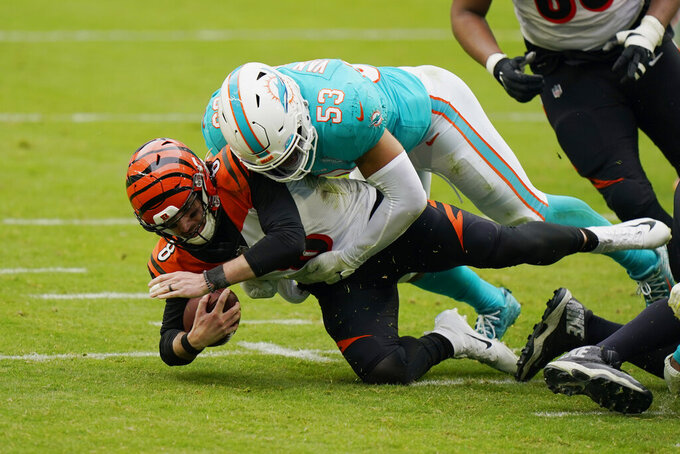 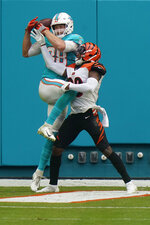 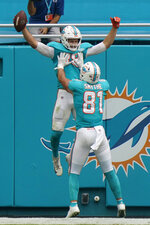 MIAMI GARDENS, Fla. (AP) — Amid all the punches and shoving and five ejections was Tua Tagovailoa’s best stretch yet as an NFL quarterback.

The rookie returned from a thumb injury that forced him to miss one game and led three third-quarter scoring drives to help the Miami Dolphins rally past the Cincinnati Bengals 19-7 Sunday in a game that included a benches-clearing confrontation and other after-the-whistle unpleasantries.

The Dolphins lost their best defender when NFL interception leader Xavien Howard was thrown out late in the first half, but they limited Cincinnati to 25 yards after halftime and finished with six sacks. Miami ranks second in the NFL in scoring defense and has allowed 10 points in the past two weeks.

Both benches emptied in the fourth quarter after Cincinnati’s Mike Thomas was flagged for a foul covering a punt. There was pushing and shoving, and Bengals safety Shawn Williams and Miami receivers DeVante Parker and Mack Hollins were ejected.

Miami coach Brian Flores came onto the field and yelled at the Bengals.

Tyler Boyd turned a short pass into a 72-yard touchdown to give the Bengals a 7-0 lead, but he was later ejected following a tussle with Howard.

The Dolphins (8-4) won for the seventh time in eight games to achieve their best 12-game record since 2003.

Tagovailoa improved to 4-1 as a rookie starter with seven touchdown passes and still no interceptions. He played with the thumb on his throwing hand taped, and warmed up as the game wore on. He threw for 167 yards in the pivotal third quarter, when the Dolphins rallied from a 7-6 halftime deficit to mount three scoring drives.

“I wasn’t really playing in sync with how the guys were playing,” he said. “Things started to click at the end of the first half.”

Cincinnati’s Brandon Allen, making his second start after a knee injury ended rookie Joe Burrow’s season, went 11 for 19 for 153 yards before being sidelined late in the game with a chest injury. Afterward he said he was OK.

The Bengals (2-9-1) lost their fourth game in a row and are assured of at least nine defeats for the fifth consecutive year.

“We weren’t good enough in the third quarter,” coach Zac Taylor said. “That’s where it got away.”

The Dolphins won even though they didn’t convert a third down until the final minute. Jason Sanders kicked four field goals and is 28 for 29 this year.

Miami started three rookie offensive linemen for the first time this year and gave up no sacks. Myles Gaskin, back after missing four games due to a knee injury, had 90 yards rushing and 51 receiving.

Howard and Boyd were tossed for trading punches on the sideline after a third-down incompletion late in the first half.

The Bengals, leading 7-3, were also penalized 15 yards on the play for unnecessary roughness by Boyd, which may have cost them points. The foul left the Bengals with a 53-yard field goal try, and Randy Bullock missed. Miami then moved 27 yards in the final minute and kicked a field goal to trail 7-6 at halftime.

“We left three points on the field there in the first half we should have had,” Taylor said.

The Bengals’ Jordan Evans scored on a 73-yard fumble return when Tagovailoa lost the ball, but the touchdown was erased by a replay reversal changing the ruling to an incomplete pass.

The Dolphins scored from the 2 on a run with their field goal team in the game, but two rookies were flagged for an illegal formation and Miami settled for three points.

The Dolphins begin a tough closing stretch next Sunday when they play host to defending Super Bowl champion Kansas City. The Chiefs haven’t played in Miami since 2014.

The Bengals play host to the Dallas Cowboys next Sunday. The teams last met in 2016.