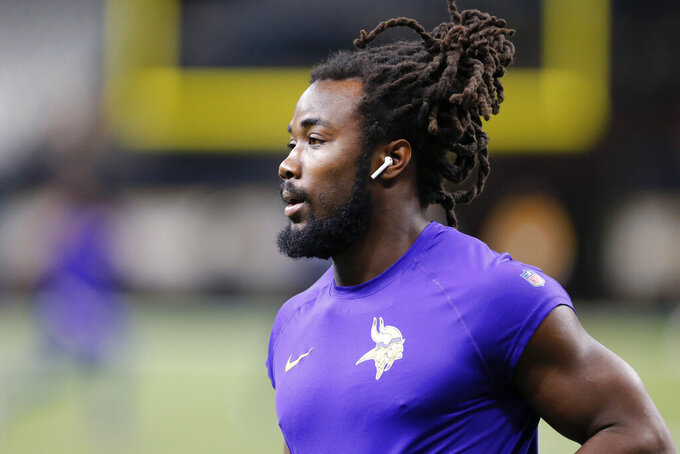 Minnesota Vikings running back Dalvin Cook (33) warms up before an NFL wild-card playoff football game against the New Orleans Saints, Sunday, Jan. 5, 2020, in New Orleans. The Vikings have signed Cook to a contract extension, the day before the season opener, Saturday, Sept. 12, 2020. (AP Photo/Brett Duke, file)

MINNEAPOLIS (AP) — The Minnesota Vikings signed running back Dalvin Cook to a five-year, $63 million contract extension Saturday, giving their dual-threat star some security the day before the season opener.

Cook was picked for his first Pro Bowl last year after becoming the eighth different player to reach 1,000 rushing yards in Vikings history. Since he was drafted in the second round in 2017 out of Florida State, Cook has missed 21 of a possible 52 games due to injuries.

In 2019, he came the closest to a full season, sitting out twice with shoulder trouble yet still finishing seventh in the league with 1,654 yards from scrimmage. He had 13 rushing touchdowns, tied for the second-highest single season total in franchise history, and 519 receiving yards.

Since offensive coordinator Gary Kubiak arrived last year, first as an offensive advisor for run-favoring head coach Mike Zimmer, the Vikings have made screen passes a bigger part of their scheme. With an average of 11.15 yards after the catch per reception, Cook led all NFL running backs with a minimum of 25 receptions.

Cook's deal came with $28.2 million in guaranteed money. The annual average value of his new contract ($13 million) puts him into the top eight in the league. That group also includes Alvin Kamara (New Orleans) and Joe Mixon (Cincinnati), fellow members of his 2017 draft class who received new contracts from their teams in September. Kamara's deal was also done on Saturday. Derrick Henry (Tennessee) was another peer to recently get an extension.

In the absence of the added security at his punishing position that leads to one of the shortest careers in the sport, Cook logged off for part of the virtual team activities earlier this year while the virus outbreak kept team facilities closed.

Without the same leverage to hold out longer like some other running backs have done in recent years, Cook didn't miss any training camp, and nor did he ever express any dissatisfaction with the team. His salary for 2020 on his rookie deal is a little more than $1.3 million.

Asked again Wednesday whether he'd be anxious about playing Sunday without an extension, Cook said simply, “If coach Zimmer calls my name, I’ll be out there.”

With his 1,135 yards last year, Cook became the first 1,000-yard rusher for the Vikings since Adrian Peterson in 2015. Peterson also signed his first contract extension the day before the 2011 season opener, a six-year, $96 million deal.