Washington could get Samuel back against banged-up Seahawks 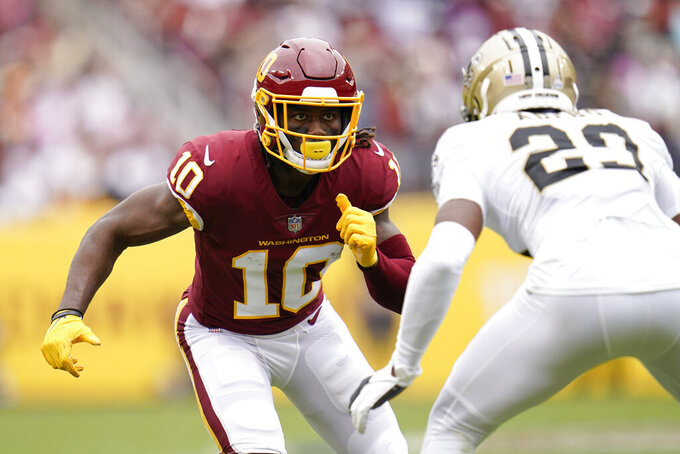 FILE - Washington Football Team wide receiver Curtis Samuel (10) runs a route against New Orleans Saints cornerback Marshon Lattimore (23) in the first half of an NFL football game Oct. 10, 2021, in Landover, Md. Samuel is expected to return for Washington on Monday, Nov. 29, 2021, against the Seattle Seahawks after missing the vast majority of this season with a lingering groin injury. (AP Photo/Julio Cortez, File)

Curtis Samuel did not know much about groin injuries until this year, when the shifty receiver figured out it’s just about the worst thing that could throw him off his game.

Samuel is expected to return for Washington on Monday night against the Seattle Seahawks after his lingering groin injury caused him to miss the vast majority of the season. After being limited to four catches in two games, the 25-year-old is confident he can be his usually potent self again.

“I’m not going to put myself out there unless I could play close to, if not better, than where I was at before,” Samuel said. “My thing is I just want to go out there and be dynamic and make things happen.”

Washington could also get tight end Logan Thomas back from a hamstring injury, a big boost against an opponent that is banged up. Seattle lost cornerback Tre Brown to a season-ending knee injury and won’t have running back Rashad Penny (hamstring) or starting left guard Damien Lewis (elbow).

Coach Ron Rivera believes having Samuel back “really will be what the offense needs.” Washington is already on a two-game winning streak to move to the fringe of the NFC playoff race, and giving quarterback Taylor Heinicke another strong target to go along with No. 1 receiver Terry McLaurin only makes the team more of a threat — even if Samuel is going to be on what Rivera called a “pitch count.”

“Plugging him back in, it’s not going to be that difficult,” Rivera said. “A lot of things that some of the other guys have been doing ... he knows how to do and he knows how to fit into it.”

Samuel was supposed to be a major part of Washington’s offense after signing a $34.5 million, three-year contract in the offseason. The groin injury happened during spring workouts, lingered into training camp (when he also spent time on the NFL's COVID-19 list) and then kept setting him back when he tried to play.

That’s one major reason why Washington has kept him out the past five games: to let Samuel rest, recover and not rush back from an injury he wasn’t very familiar with. He and the training and medical staffs tried some different things to get the groin muscle going because his style doesn’t work on the field if it’s not fully healthy.

“That’s more cutting, lateral movements — you know how I play. I do a lot of cutting,” Samuel said. “The groin, it’s just tricky. Whenever you can go, you can go. When you can’t, you can’t. Just trying to work my way through it.”

Then there’s the mental toll of a nagging injury keeping Samuel off the field. He said he ignores social media and has had a lot of people in his corner to help keep his spirits up.

“You want to be out there so bad and then something like this happens, it brings you down a little bit,” Samuel said. “I didn’t imagine it to go this long. It’s really crazy.”

It’s crazy to imagine Washington being in the playoff hunt after dropping to 3-6 with a loss at Denver on Oct. 31 before the bye week. But the potential of having Samuel and Thomas on the field makes it realistic.

Thomas has missed the past six games with a hamstring ailment and also looks on track to return against Seattle.

“You’d like to have him back,” Heinicke said. “Big body guy, wide range, he can catch a lot of balls and he’s a matchup problem (in the red zone). You’ve seen it over the years: You kind of throw a ball high to him, and that’s a matchup we like.”