A whole lot of everything on first weekend of 100th season 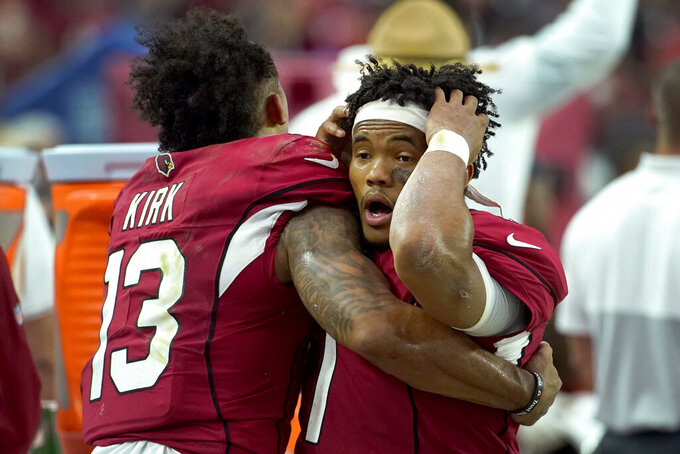 Arizona Cardinals quarterback Kyler Murray reacts with wide receiver Christian Kirk (13) during the final seconds of an NFL football game against the Detroit Lions, Sunday, Sept. 8, 2019, in Glendale, Ariz. The Lions and Cardinals played to a 27-27 tie in overtime. (AP Photo/Rick Scuteri)

We've come to expect the unusual, the unpredictable, even the unfathomable on the opening weekend of the NFL season.

No one can claim we didn't get all of that to begin the league's 100th season.

A tie. An SEC power versus an NAIA team, seemingly.

And Antonio Brown landing in New England with a potentially lucrative contract after basically forcing himself out of two cities with his often repulsive behavior.

My goodness, what's next?

If fans itching for the return of America's most popular sport weren't entertained in Week 1 — well, the folks in Miami certainly weren't — they need to look elsewhere for their kicks.

Speaking of which, the kickers got in on the action, too.

Indianapolis' Adam Vinatieri, likely headed to the Hall of Fame, experienced something for the first time in his 24-year career: two missed field goals and a missed extra point in the same game in a 30-24 OT loss to the Chargers . The Chargers' Ty Long became the first player since Miami's Olindo Mare in 1997 to have an extra point, field goal and punt in his first NFL game.

"They play hard and they never give up," LA coach Anthony Lynn said of Indy, "and our locker room is very similar, so it was a hell of a contest today. It's an exciting game. I'm just glad we came out on the winning side and trust me, it took every man in that locker room to get this done today."

Yes, there was plenty of sloppiness, too. But the fears that the Thursday night kickoff contest won 10-3 by Green Bay — you have to appreciate strong defense in such games — was a harbinger and Sunday would be mired in a morass of mistakes basically were unfounded. Sure, the Dolphins looked like a team ready to match in reverse their 1972 undefeated record after being routed by the Ravens 59-10. And the Browns, who will be accused — accurately — of falling for the offseason hype about their improvement, must be embarrassed by being manhandled by the Titans, 43-13. In Cleveland. Drawing 18 penalties for 182 yards says a lot.

And they might. Indeed, one of the charms of the NFL, as well as one of the most maddening characteristics, is how one week's outcome doesn't necessarily affect the next week. That's true over the course of the 16-game schedule.

Still, it would be tons of fun to get a repeat next week, from the highlights to the fiascos.

Maybe Lions fans would take umbrage with describing the Cardinals' comeback to tie Detroit fun. But consider the circumstances, including Arizona climbing out of an 18-point hole in the fourth quarter. With the top overall draft pick, Kyler Murray, and a certain Hall of Famer in receiver Larry Fitzgerald, leading the way.

Or look at similar comebacks by Buffalo, Philadelphia and Indianapolis.

Browns starting left tackle Greg Robinson was ejected for kicking Titans safety Kenny Vaccaro. Jaguars linebacker Myles Jack was sent packing after taking a swing at Chiefs linebacker Demarcus Robinson. Jack even had to be restrained by two team officials and essentially pulled off the field. San Francisco linebacker Kwon Alexander was penalized 15 yards and dismissed for lowering his helmet to initiate contact on a hit to Tampa Bay quarterback Jameis Winston as he was sliding after a 5-yard run.

As we said, a bit of everything — with two more games to go Monday night.