Wilson returns as Jets look to end skid against Texans 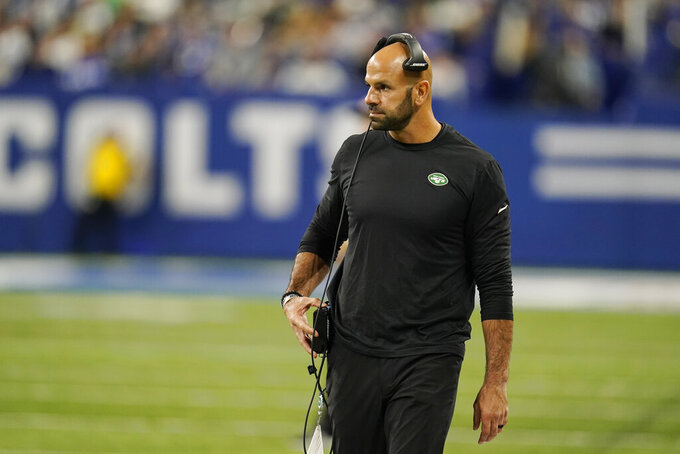 HOUSTON (AP) — Out the last four weeks with a knee injury, quarterback Zach Wilson used the time it took to recover to study everything the New York Jets were doing in hopes of improving when he returned.

Now that the rookie is healthy, he’s ready to use those lessons Sunday against the Houston Texans when the Jets try to snap a three-game skid.

“Every rep that they went through, I was able to learn from and apply it to my game,” Wilson said. “I just feel like it’s going to help me going forward.”

The game is a meeting of two of the worst teams in the league with both the Jets and Texans having won just twice this season.

Wilson, the second overall pick in the draft, has struggled in six starts this season, throwing nine interceptions with just four touchdown passes. Despite those numbers, the Jets believe he was making progress before spraining a knee ligament on Oct. 24, and believe he’ll build on that Sunday.

“It’s just continue getting comfortable earlier in the game and let his athleticism take over and his arm talent take over, because he is a talented young man,” Jets coach Robert Saleh said. “Just step up, get better and take it one play at a time.”

Houston defensive coordinator Lovie Smith said his defense doesn’t change much according to who’s at quarterback. The film of Wilson from earlier this season will help them prepare for his return Sunday.

“He’s an athletic guy that can make any throw,” Smith said. “When you’re playing a guy like that, there are certain things that you have to do. We set our defense up for athletic quarterbacks, so hopefully we’ll be able to shut down them down.”

Wilson’s return comes after the Jets put backups Mike White and Joe Flacco on the COVID-19 list. White has been ruled out for Sunday’s game after testing positive for the virus, and Flacco, who is unvaccinated, was a close contact. He would have needed to test negative for five straight days to play against the Texans. The Jets plan to elevate Josh Johnson from the practice squad to back up Wilson.

The Texans ended an eight-game slide with an upset of AFC South leader Tennessee last week, but know they’ll need to play better to build on that.

Houston tied a franchise record with four interceptions and had five takeaways for a second straight game against the Titans. The huge defensive performance in the rain helped make up for an offense that sputtered at times in the 22-13 win.

Quarterback Tyrod Taylor bounced back by running for two touchdowns with no turnovers. The performance came after the veteran tied a career high by throwing three interceptions in his return from a six-game injury absence in a loss to Miami in Houston’s previous game.

“We did not play that well, but one thing we did do, overall, is we protected the football,” coach David Culley said.

Rookie Michael Carter seized the role as the Jets’ primary running back in recent weeks, rushing for a team-leading 430 yards and four touchdowns. But he’s out for at least two weeks with a high ankle sprain.

That means Ty Johnson, Tevin Coleman and perhaps La’Mical Perine will have to pick up the slack. Johnson has 144 yards and a touchdown on 42 carries, Coleman 118 yards on 30 attempts, and Perine just one carry for 3 yards.

While the Detroit Lions have the worst record in the NFL at 0-10-1, these two teams aren’t much better and occupy the bottom spot in the NFL in multiple statistical categories.

The Texans rank 32nd on offense by gaining just 271.1 yards a game. Not to be outdone, the Jets take the crown for worst defense by allowing a whopping 414.2 yards an outing.

Houston ranks dead last in rushing, managing a paltry 76.5 yards a game. The Jets land at No. 32 in pass defense by giving up 282.2 yards a game.

But those aren’t all the spots in which these teams are the worst. The Texans are scoring the fewest points in the NFL, averaging only 15, and the Jets rank last in points allowed by giving up 32 a game.

The Jets have also committed the most turnovers in the NFL this season with 23 and they’ve gotten just eight takeaways, which leaves them in — you guessed it — last place in the NFL with a minus-15 turnover differential.

It hasn’t taken long for Elijah Moore to establish himself as a playmaker in the Jets’ offense.

The rookie wide receiver has 24 catches for 336 yards and four touchdowns in his last four games. Last week’s performance against Miami was his best with eight receptions for 141 yards, the most by a Jets rookie since Rob Moore had 175 at New England in 1990.

And that has been with White, Johnson and Flacco throwing him the ball.

After allowing 45 points in three of their last four games and giving up a team-record 175 points in that span, the Jets gave up just 24 against Miami last Sunday.

New York still lost, but it was finally a positive for a defense that had been brutally bad and searching for answers. The Jets were still disappointed they were unable to make some crucial stops late in the game against the Dolphins. And better decision making and discipline have been the focus this week.

“You just keep showing it to them, keep demanding that they see it,” defensive coordinator Jeff Ulbrich said.