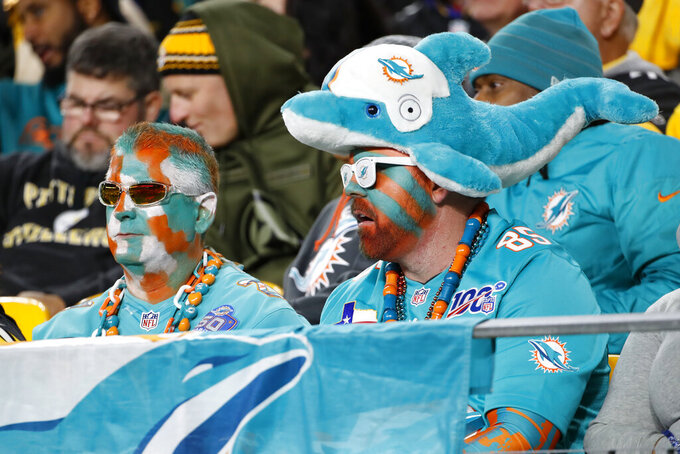 Miami Dolphins fans watch the second half of an NFL football game against he Pittsburgh Steelers in Pittsburgh, Monday, Oct. 28, 2019. (AP Photo/Don Wright)

DAVIE, Fla. (AP) — Nearing the midpoint in the season, the Miami Dolphins must wonder what it will take to win a game.

Their furious fourth-quarter rally against the Washington Redskins in Week 6 didn't do it. A lead in the final period against the Buffalo Bills in Week 7 wasn't enough. And a two-touchdown advantage in the first quarter Monday at Pittsburgh couldn't do it.

Might the New York Jets be what the Dolphins need? Former Dolphins coach Adam Gase and his Jets (1-6) visit Miami (0-7) on Sunday.

The Dolphins are underdogs, as they have been in every game, but only by five points. That suggests Miami has a decent chance to break a two-year, 10-game losing streak that dates to the days of Gase in December 2018.

Quarterback Ryan Fitzpatrick remains confident a breakthrough will come for the rebuilding Dolphins.

"This whole thing is just a progression," he said. "We'll continue to go for it."

Here are things to know about the Dolphins as they prepare for Sunday's matchup of misery:

As ordered by owner Stephen Ross, the Dolphins gutted the roster so they could position themselves for a draft bonanza in 2019. They remain the favorite for the No. 1 selection, and if the season ended this week, they'd have three of the first 26 picks.

The Dolphins have been outscored 130-20 in the second half, including 17-0 at Pittsburgh.

Defensive end Taco Charlton has a career-high four sacks in five games for Miami. The latest came when he forced a fumble by quarterback Mason Rudolph, but the Steelers recovered and had a 4-1 advantage in takeaways.

Miami led 14-3 in the final seconds of the first half when Pittsburgh faced a third-and-20 at midfield. The Dolphins blitzed with eight defenders and got scorched by Diontae Johnson's catch and run for a 45-yard score that gave Pittsburgh the momentum and gave Dolphins second-guessers plenty of fodder.

Flores defended the blitz after the game, and again Tuesday.

"If you want to win games in this league, you've got to be aggressive," Flores said. "We blitzed them, they made a play. It happens."

Miami decided Tuesday to place cornerback Xavien Howard on injured reserve with a knee injury that bothered him in recent weeks. He made his first interception of the season at Pittsburgh before his troublesome knee flared up, and he watched the end of the game from the sideline.

Minus-14: That's the Dolphins' turnover differential, worst in the NFL.

They rank last with three takeaways and are tied for second worst with 17 turnovers.

The Steelers had a 4-1 edge in takeaways, including two interceptions by Minkah Fitzpatrick, acquired from Miami after Week 2.

"It's hard to overcome losing the turnover battle in this league," Flores said. "We're no different."