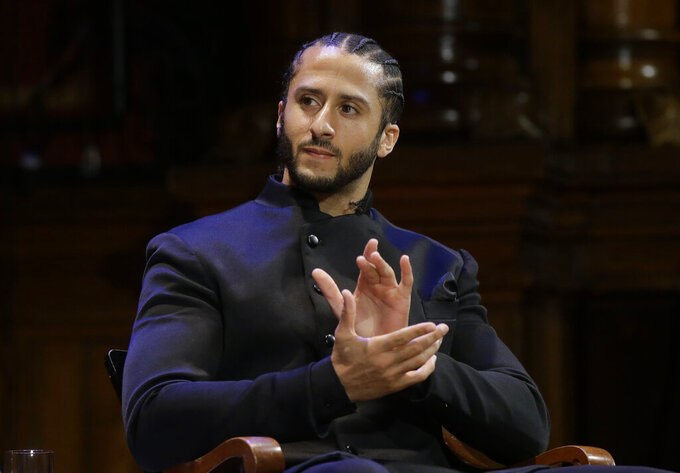 FILE - In this Oct. 11, 2018, file photo, former NFL football quarterback Colin Kaepernick applauds while seated on stage during W.E.B. Du Bois Medal ceremonies at Harvard University in Cambridge, Mass. Republican concerns that the former NFL quarterback is too controversial to honor as a black leader doomed a resolution recognizing Black History Month in the state Assembly, Tuesday, Feb. 12, 2019. The Legislature's black caucus had proposed a resolution honoring a number of black leaders, including Kaepernick, but Assembly Republicans refused to take it up. (AP Photo/Steven Senne, File)

February is Black History Month. The Legislature's black caucus had proposed a resolution honoring a number of black leaders, including Kaepernick.

Kaepernick, who was born in Wisconsin and used to play for the San Francisco 49ers, began kneeling during the national anthem before games in 2016 to protest police brutality and racial inequality. President Donald Trump has repeatedly slammed players who kneel during the anthem.

Wisconsin Republicans tried to bring their resolution excluding Kaepernick to the floor but fell short of the two-thirds majority they needed after all the chamber's Democrats voted against the move.

Republicans said they tried to honor black history and moved on to another bill. Rep. David Crowley, chairman of the Legislature's black caucus, walked out of the chamber. He told a reporter in the foyer that black people should be allowed to choose the leaders they want to honor and Kaepernick is "making history."

Republicans later added the black caucus' resolution to the agenda, then amended it to delete Kaepernick's name on a 61-34 party-line vote. That put Democrats in an awkward position — deciding whether to oppose their own resolution or adopt it without Kaepernick.

After that vote, Crowley said many see Kaepernick as unpatriotic without truly knowing him. He said deleting Kaepernick's name is a "textbook example of white privilege" and that he shouldn't need to get permission from white lawmakers to put together a list of black leaders.

None of the Assembly Republicans are black and none defended deleting Kaepernick's name on the floor.

A tweet on Republican Rep. Barbara Dittrich's account, however, said that Kaepernick wore socks depicting police as pigs and Wisconsin flags are flying at half-staff in honor of a Milwaukee police officer who was killed last week.

The tweet was later deleted and Dittrich, when reached at her office, said she didn't send the tweet and didn't know who did. Dittrich, who is white, said her staffer, Keith Best, is only other person with access to her account. Best, who is also white, declined comment.

Former Republican Rep. Tom Weatherston, who is white, said in July that Best was working for him as an aide when he posted a message on Weatherston's Twitter account suggesting that state Sen. Lena Taylor was a racist because she opposes Wisconsin's voter ID law. Taylor is black.

Crowley said he still supported the resolution despite Kaepernick's name missing but has "heartburn" over it.

The resolution, which ended up passing 95-0, now goes to the state Senate. Republicans control that chamber as well. There isn't a black senator among them.

Last year's Black History Month resolution ran into similar hurdles in the Assembly after Republican Rep. Scott Allen, who is white, complained the resolution honored only a select group of black leaders rather than all blacks from Wisconsin. The chamber ultimately passed two resolutions — one written by black lawmakers and one written by Allen.