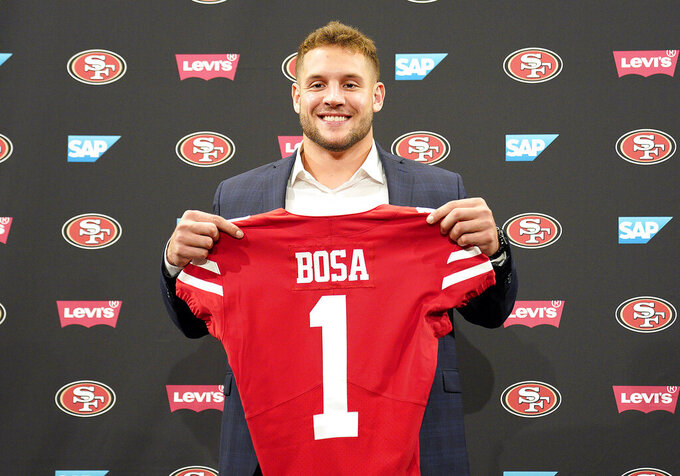 SANTA CLARA, Calif. (AP) — After only two wide receivers went in the first 35 picks, the San Francisco 49ers had plenty to choose from when it came time to make their second-round selection.

They opted to go for a player they had some familiarity with after coaching him in the Senior Bowl, selecting South Carolina's Deebo Samuel with the 36th overall selection in the NFL draft. They added another receiver when they selected Baylor's Jalen Hurd in the third round with the 67th pick Friday.

"It hurts for people to tackle him," coach Kyle Shanahan said. "It doesn't hurt him as bad. That's a physical receiver, to me, and a big guy and when you have the hands like that and you have the speed. We're not playing basketball. We're not just trying to throw alley-oops under the back board and post people up and box them out and stuff. We want guys to separate, to get the ball in the hand and run."

Samuel had 62 catches for 882 yards and 11 touchdowns last season for South Carolina and is also skilled as a returner with four kick return touchdowns in his career with the Gamecocks. He has experience playing both outside and in the slot and excels with his ability to run after the catch. He forced 21 missed tackles last season, according to Pro Football Focus.

"Me personally, I just feel like you've got to have that dog in you," Samuel said. "Having that mindset, not one person is going to bring you down, and you're going to make every catch that's thrown your way."

Hurd spent three seasons as a running back at Tennessee before transferring to Baylor and changing positions. He had 69 catches for 946 yards and four TDs last season. He had multiple shoulder surgeries in college and also had minor knee surgery last year.

Shanahan said Hurd is versatile enough to be drafted as a receiver, running back or tight end.

"That's a pretty unique thing to have," Shanahan said. "I don't remember being able to say that about any player I've studied before. So, it's neat to be able to do that and he can help us out in a lot of different ways."

The 49ers' second-round pick was announced by DeMarcus Cobb, the son of late 49ers scout Reggie Cobb, who died last Saturday at the age of 50. There was a moment of silence to honor Reggie Cobb before the pick was made.

Bosa, the brother of Chargers star Joey Bosa, had 17 1/2 sacks and 29 tackles for loss in 30 games with the Buckeyes. He played in only three games last year before suffering a core muscle injury that required season-ending surgery.

Bosa will team with recently acquired Dee Ford to give the Niners two potent edge rushers to help upgrade a defense that set an NFL record for futility with only seven takeaways last season.

Bosa was asked again about his social-media history that included some Twitter messages that he deleted that could be considered racist and homophobic. He apologized for one that called former 49ers quarterback Colin Kaepernick a "clown" shortly after he began his protest of racial injustice and police brutality by kneeling during the national anthem.

"It wasn't directed toward that," he said. "It's not like I'm saying his stance and what he was doing, that's not what I was calling or talking about at all. It was just me, a specific thing that happened and me as a young kid, a thought popping into my head and boom, decided to tweet it out. Bad, bad decision. I respect what he's done. If it empowers anybody, then he's doing a good thing. I apologize for that."