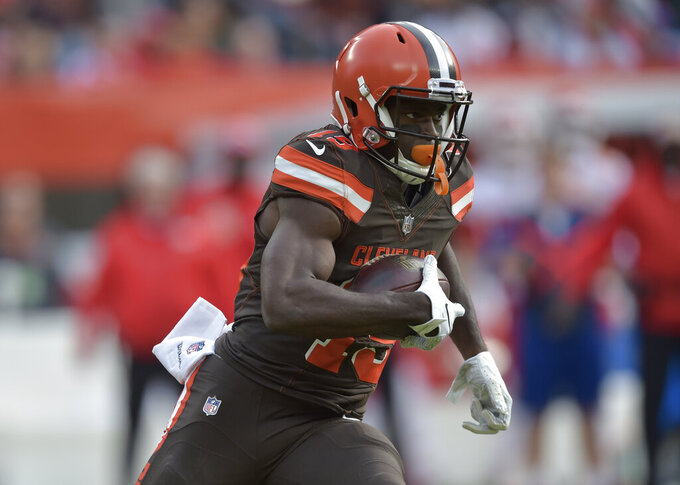 FILE - In this Nov. 4, 2018, file photo, Cleveland Browns wide receiver Breshad Perriman (19) runs after a catch during the second half of an NFL football game against the Kansas City Chiefs in Cleveland. Perriman will re-sign with the Cleveland Browns after a bounce-back season. He was set to hit the free-agent market on Wednesday, March 13, 2019. (AP Photo/David Richard, File)

One week after acquiring end Olivier Vernon in a trade, Cleveland added an inside presence to its line by agreeing with free agent tackle Sheldon Richardson on a three-year, $39 million contract, a person familiar with the deal told The Associated Press on Tuesday.

Richardson, who has played with three other teams since 2013 and been suspended twice by the NFL, will receive $21.5 million guaranteed, said the person, who spoke on the condition of anonymity because league rules prohibit teams from announcing signings until 4 p.m. EDT Wednesday.

The Browns have also decided to bring back wide receiver Breshad Perriman, who has agreed to a one-year, $4 million deal for next season, the person said. Perriman revived his career with Cleveland last season after being released by Baltimore.

The imminent signing of the 28-year-old Richardson gives the Browns a potentially menacing front four as he'll play alongside Pro Bowl end Myles Garrett, who had 13 ½ sacks last season and has 20 in 27 career games.

Vernon, who didn't live up to expectations the past few seasons, gives Cleveland another threat off the edge, and Larry Ogunjobi emerged last season as a dependable run stopper.

Cleveland's defense ranked No. 30 overall last season and had 37 sacks, and Dorsey has made upgrading the front seven an offseason priority.

He's done it, and Richardson's addition will give Dorsey more flexibility heading into next month's draft. The Browns have the No. 17 overall pick and many experts had the team focused on adding a tackle in that spot from what's considered a deep class.

It's possible Dorsey will use the selection — Cleveland currently has 10 picks in 2019 — to get another playmaker for quarterback Baker Mayfield. The Browns need a wide receiver who can stretch the defense and there are some highly regarded players who will be available.

Another possibility is through trade, and speculation surrounding New York Giants star Odell Beckham Jr. and the Browns won't go away. Dorsey has a good rapport with Giants GM Dave Gettleman, who has repeatedly said he didn't sign Beckham to a five-year, $90 million extension last August to trade him.

Beckham teamed with Browns receiver Jarvis Landry at LSU and the two have worked out in the past with Mayfield.

In the meantime, Perriman gives Mayfield another target and a player with whom he has built a connection. A first-round pick in 2015, Perriman was a bust with the Ravens and they cut him before last season.

He signed with the Browns in October after a rash of injuries ruined Cleveland's depth and was a pleasant surprise, finishing with 16 receptions for 340 yards and two touchdowns in 10 games. He expressed his desire to stay with the Browns and the team and agent struck a deal before he was set to hit the open market.

With Perriman, Landry and Antonio Callaway, the Browns may have enough to dissuade them from giving up what it might take to land Beckham.

Richardson will help the Browns get to the quarterback and plug the middle. The 6-foot-3, 295-pounder spent last season with Minnesota, where he had 49 tackles and 4 ½ sacks in 16 games. In six seasons as a pro, he has 23 ½ sacks and 195 tackles in 87 games.

Richardson was the AP's Defensive Rookie of the Year in 2013.

While talented, he has also run into some trouble.

Richardson was suspended for the Jets' first four games in 2015 season for violating the substance-abuse policy for testing positive for marijuana. The league also suspended him for the first game in 2016 under its personal-conduct policy after he tried to outrun police in St. Louis, driving his Bentley at 143 mph before being stopped.

NOTES: The Browns re-signed DL Carl Davis, who joined the team via waivers from Baltimore during final roster cuts last summer and appeared in five games. A third-round pick in 2015, Davis has appeared in 33 career games with 12 starts.