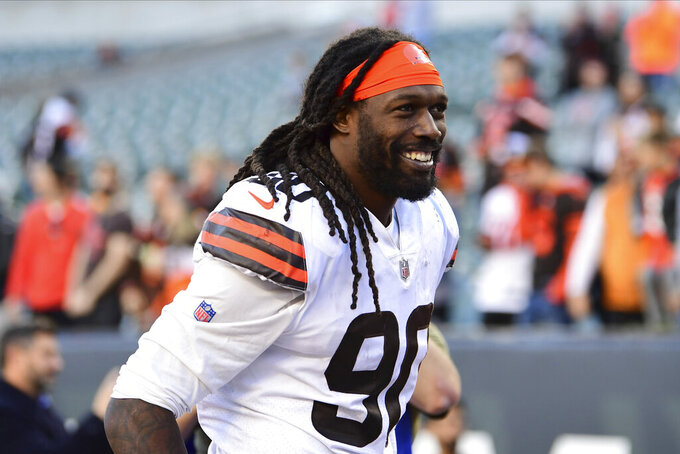 FILE - Cleveland Browns defensive end Jadeveon Clowney walks off the field after an NFL football game against the Cincinnati Bengals, Nov. 7, 2021, in Cincinnati. Free agent Clowney has agreed to re-sign with the Browns, a person familiar with the deal told the Associated Press on Sunday, May 22, 2022. Clowney will sign one-year contract, according to the person who spoke on condition of anonymity because the team has not announced the agreement. (AP Photo/Emilee Chinn, File)

CLEVELAND (AP) — Jadeveon Clowney's running it back with Myles Garrett and the Browns.

The free agent defensive end, who revived his career last season with Cleveland, agreed Sunday to re-sign with the team for 2022, a person familiar with the deal told the Associated Press.

Clowney, who had nine sacks while playing opposite Garrett, will sign a one-year contract worth up to $11 million, according to the person who spoke on condition of anonymity because the team has not announced the agreement.

The Browns had remained optimistic — and cautiously confident — about bringing back Clowney.

The 29-year-old and 2014 No. 1 overall pick had his most sacks since 2018 with Houston while playing in 14 games last season for Cleveland. He signed a one-year, $10 million deal with incentives last April with the Browns.

Clowney's presence forced offenses to commit an extra blocker at times to his side, which in turn freed up Garrett, who had a career-high 16 sacks in 2021 and was an All-Pro. Garrett also enjoyed playing with Clowney and had expressed hope they could team up again.

In April, Garrett posted a photo on his Instagram page of him slapping hands with Clowney during a game last season along with the caption: “Job not finished.”

Back with the Browns, Clowney will also be reunited with quarterback Deshaun Watson. They played together for two seasons with the Texans.

It makes sense for Clowney, who has been slowed by injuries during his career, to return to the Browns. Not only does his pairing with Garrett give the team two elite edge rushers, but the Browns know how to best utilize his strengths as well as when to give him time off to keep him healthy.

Clowney has always been an intriguing talent with his unique blend of size and speed. Before signing with Cleveland, he was limited to eight games with Tennessee in 2020 because of a knee injury and surgery. He spent 2019 with Seattle after four years in Houston.

Unsure if they'd get Clowney back, the Browns added some new defensive line pieces during the offseason by acquiring end Chase Winovich in a trade from New England and drafting Alex Wright (UAB) and Oklahoma teammates Isaiah Thomas and Perrion Winfrey.