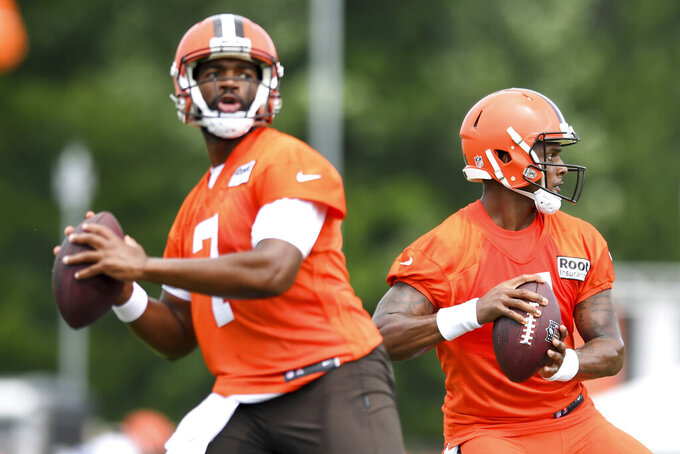 CLEVELAND (AP) — Jacoby Brissett has jumped ahead of Deshaun Watson on Cleveland's depth chart. Maybe for a while.

Watson, who made his debut with the Browns by starting Friday's exhibition win over Jacksonville, has been the No. 1 quarterback throughout training camp.

But he's going to miss at least the first six regular-season games — and potentially more — so the Browns need to get Brissett ready for the Sept. 11 opener at Carolina.

“That has been the plan really from the beginning is just to at some point let Jacoby get the majority of them, still work Deshaun, still work Josh Dobbs and still work Josh Rosen,” Stefanski said, referring to Cleveland's four QBs during a Zoom call with reporters.

His six-game suspension handed down by independent arbiter Sue L. Robinson was appealed by the NFL and is being decided by Peter C. Harvey, a former New Jersey Attorney General appointed by Commissioner Roger Goodell.

Harvey's ruling could come at any time and there's still the possibility Watson and the league could agree to a settlement.

On Thursday, a person familiar with Watson's defense told the AP the three-time Pro Bowler would accept an eight-game suspension and $5 million fine. The person spoke on condition of anonymity because of the sensitivity of the case.

Before Friday's game, Watson's first in nearly 600 days, he apologized for the first time since two dozen women filed lawsuits against him alleging sexual harassment and assault during massage therapy sessions while he played for Houston.

“I’m truly sorry to all of the women that I have impacted,” Watson said.

In her ruling, Robinson noted Watson's lack of remorse played a factor in her decision to suspend him.

Stefanski said the apology was a good step for Watson.

“I just think Deshaun has been very committed to being the best version of himself,” Stefanski said. “That is off the field and that is on the field, obviously when he is in this building, but more so I do think he wants to learn and grow as a person. That is important.”

In the meantime, the Browns need to get ready for the season.

Brissett was signed in March by the Browns, who viewed him as a perfect plug-in while Watson is sidelined. The 29-year-old Brissett has made 37 career starts and been thrown into unique situations, including in 2019 when he became Indianapolis' starter following Andrew Luck's stunning retirement.

The Browns didn't play Brissett against the Jaguars to avoid the risk of an injury and to get Watson back into the flow of a game. Now, it's time for Brissett to get more time with Cleveland's starters.

Stefanski has been pleased with the team's plan to this point.

"He will keep on that same process and making sure he is running the show when he is in there. He does a nice job in the quarterback meeting room with those guys, so I just think this is also the natural progression for him moving forward.”

The Browns will practice twice this week against the Philadelphia Eagles before hosting them next Sunday in their first home exhibition.