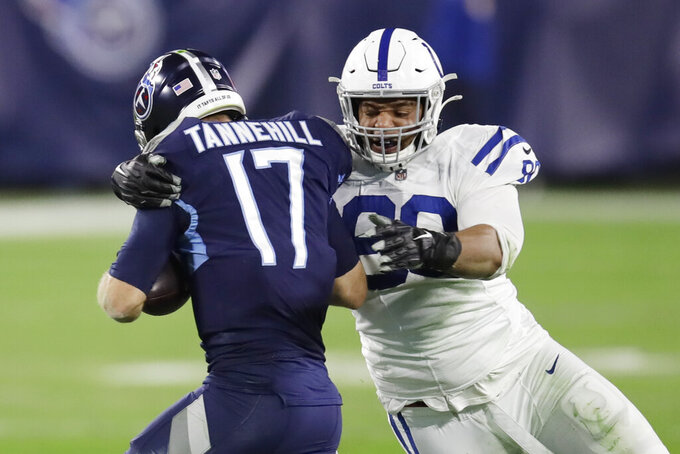 When the Indianapolis Colts selected defensive tackle Grover Stewart in the 2017 draft, they initially considered him a rotational player. They hopes he could develop into a starter.

Stewart has done better than expected. He's become a key cog on the NFL's second-stingiest defense and on Saturday, general manager Chris Ballard rewarded Stewart by signing him to a three-year contract extension worth up to $30.75 million with $20 million guaranteed.

The four-year veteran could have become a free agent after this season.

“He (Stewart) feels like he’s underrated," Pro Bowl linebacker Darius Leonard said last week. “He feels like he’s been slept on and you can tell that his mindset this year has been crazy. He’s running to the ball like no other. After a full day of practice, he is out there running with receivers just making sure he’s staying in shape. He’s out to prove something, and me, I’m the same way. But if he's up front proving a point, that means I’m running around making plays, too."

The move aligns perfectly with two of Ballard's staple principles — keeping players the Colts (7-3) develop and building his defense from the inside out.

And it means Indy's two starting defensive tackles will stay together long term.

Ballard sent a first-round pick to San Francisco in March to acquire Pro Bowl defensive tackle DeForest Buckner, who quickly agreed to a four-year deal worth $84 million. Stewart, a fourth-round draft pick selected No. 144 overall, has his big deal, too.

Playing next to Buckner has led to a career year for the 6-foot-4, 315-pound Stewart.

He already has a career-high 36 tackles and his four tackles for loss are one short of last season's career best. Both Colts defensive tackles also have 24 solo tackles this season, tied for the second-most in the league at their position.

And Stewart is expected to take on an even bigger role Sunday with Tennessee visiting Indy in a matchup of the AFC South co-leaders.

Buckner was placed on the Reserve/COVID-19 list earlier this week and will not play. Defensive end Denico Autry, who leads the Colts with six sacks, also will miss the game after going on the COVID list last week.

Coach Frank Reich had already announced starting linebacker also would sit out with an ankle injury. On Saturday, the Colts also ruled out two more starters — center Ryan Kelly (neck) and rookie running back Jonathan Taylor after he was placed on the COVID list.