Falcons look for another strong finish to lost season 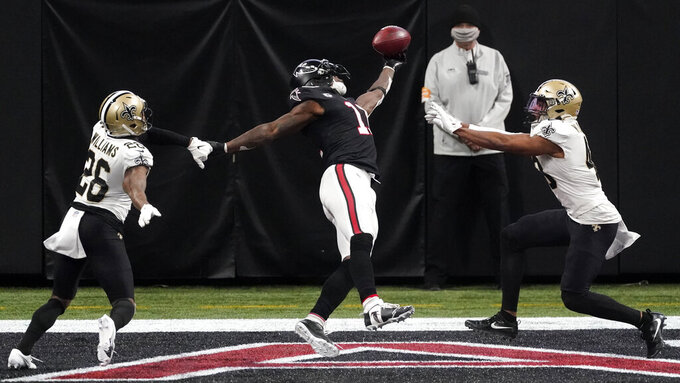 ATLANTA (AP) — The Falcons have plenty of experience at this, far more than they would like.

For the third year in a row, Atlanta (4-8) heads into the final month of the season with not a lot to play for beyond pride.

An 0-5 start essentially doomed the season, as well as costing coach Dan Quinn his job.

Now, after two losses to the New Orleans Saints in the past three weeks, the Falcons move on to Sunday's game against the Los Angeles Chargers merely trying to take the first step toward salvaging a .500 season.

To their credit, the Falcons have played well in the final quarter of the season the past several years — no matter the stakes.

In 2016 and '17, when the Falcons were on the way to the playoffs, they went a combined 7-1 over the last four games of the regular season. The last two seasons, when they were far out of the postseason chase, they also went 7-1 in the closing stretch.

“I'm always doing my best to be consistent throughout the year so I can be consistent late in the season,” Ryan sad. "It's why we work so hard in the offseason to get our body in great shape to be able to last so we can make the run at the end of the year that we need to make.

“Unfortunately,” he added, “the last couple of seasons have not been for the playoffs. But regardless of that, it's about finishing things off the right way. We're in a good place. The health of the team is good. We just need to go out and play the way we're capable of playing.”

It will be difficult for the Falcons to duplicate their December success. After facing the Chargers (3-9), they close the season with two games against Tom Brady and the Tampa Bay Buccaneers, sandwiched around a trip to Kansas City to face the Super Bowl champion Chiefs.

But, as Ryan said, this is a chance to audition for a role with the team heading into an offseason that is likely to feature major changes.

The Falcons largely stood pat last time, believing a strong finish to the 2019 season would carry over.

They aren't likely to make that same mistake again.

Interim coach Raheem Morris, who has consistently shied away from any questions is about his future in Atlanta, prefers to stay focused on the immediate task.

“It's the same objective every week: score and get the ball back, force your will on the opponent, do the job we all love to do and are fortunate to do,” Morris said. “It's absolutely without a doubt a privilege to play in this league. Whether you're coaching in it or playing in it, you've got to take advantage of it to the fullest.”

NOTES: Four players did not practice Wednesday, including receiver Julio Jones He continues to nurse a hamstring injury, though he was able to play last weekend against the Saints. ... P Sterling Hofrichter (right hamstring), S Ricardo Allen (concussion) and OG James Carpenter (groin) also sat out.