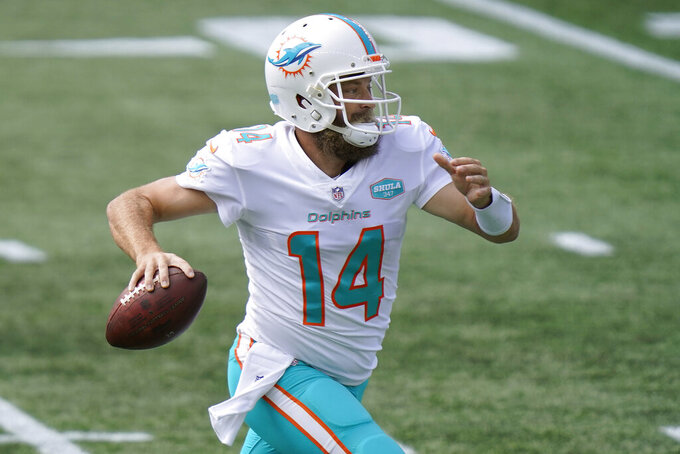 FILE - Miami Dolphins quarterback Ryan Fitzpatrick scrambles to pass against the New England Patriots in the second half of an NFL football game, Sunday, Sept. 13, 2020, in Foxborough, Mass. The Miami Dolphins’ self-professed placeholder at quarterback played like one in the season opener, amplifying questions about the team’s timetable for turning to rookie Tua Tagovailoa. (AP Photo/Steven Senne, File)

MIAMI (AP) — If Brian Flores' rebuilding project with the Miami Dolphins is to end atop the AFC East, he must find a way to beat Josh Allen and the Buffalo Bills.

Lately the rivalry has gone the Bills' way, and Miami fans in the stands — their numbers limited because of the coronavirus — will be rooting for a reversal when the teams meet in the Dolphins' home opener Sunday.

"I would agree that the Bills are trending upward," Flores said. “This is a good team. We want to put our best foot forward.”

Flores went 0-2 against Buffalo last year, and the Bills are 5-1 against Miami since Sean McDermott became their coach in 2017. Buffalo has won three in a row in the series, with Allen throwing eight touchdown passes and one interception.

In 2020, Buffalo is off to the best start among the three AFC East teams hoping to overtake the Patriots in the post-Tom Brady era. The Bills opened last week by beating the New York Jets, while the Dolphins began Year 2 under Flores with a disappointing loss at New England.

Last week Allen threw 33 completions for 312 yards, both career highs, and directed an offense that controlled the ball for more than 41 minutes, the Bills' highest total since at least 2005.

“He has grown a lot,” said Dolphins defensive end Shaq Lawson, who was Allen's teammate on the Bills in 2018-19. "He looks a lot better than he was last year — 10 times better.”

Flores said Allen is coming into his own in his third NFL season.

“He has made incredible growth from the time we first saw him until now — from an accuracy standpoint, just an overall presence," Flores said. "He’s got command of the offense, and his leadership — that team rallies around him.”

The Dolphins expected to be better at stopping the run this year, but in the opener, they couldn't even stop quarterback keepers.

Cam Newton ran for 75 yards and two scores, and Miami gave up a league-worst 217 yards rushing. There were no fans at the game, but the Dolphins still heard about the disappointing performance from their re-tooled defense.

“We gave up 217 yards rushing, so we should get criticized," linebacker Kyle Van Noy said. “That’s not good enough.”

Allen is likely to test the Dolphins on the ground himself. He carried a career-high 14 times last week and led the Bills with 57 yards rushing.

“He’s the mastermind,” said Diggs, who had a team-leading eight catches for 86 yards as Allen completed passes to eight players. “As far as getting me involved, I’m more than thankful, but more so from the standpoint of he got everybody involved. A lot of people touched the ball."

The Bills are familiar with Ryan Fitzpatrick's inconsistency, so they're braced for his best after a wobbly performance in the opener.

Fitzpatrick threw three interceptions, which sparked a fresh round of questions about Flores' timetable for turning to rookie Tua Tagovailoa.

Answer: Not yet. Instead, the Dolphins expect Fitzpatrick to bounce back from a bad game, as he has done so often in a 16-year career.

“You don’t want to have weeks like I had last week,” Fitzpatrick said. "That can’t happen if we’re going to win games. For me and the roller-coaster I’ve been on, I have an easy way of putting things like that behind me and moving on.”

Allen is familiar with Fitzpatrick's long career, especially his time in Buffalo from 2009 to 2012. They've hung out together at the Masters golf tournament.

“He’s fun to be around," Allen said. "You hear all the stories about him in Buffalo, and how much joy he still has playing the game.”

Because of the coronavirus, only one NFL stadium allowed fans to watch the action on the season's opening Sunday. But the Dolphins will allow up to 13,000 masked, socially distancing fans to attend their home opener.

The Bills won't have fans for their first two home games, at least, and last month McDermott complained there was no uniform NFL policy about allowing fans during the pandemic. The Bills always draw well in Miami, however, and Allen figures not all of the spectators will be Dolphins rooters.

“I’m sure there’s going to be a good amount of Bills fans,” Allen said. “It’s going to be exciting to be back in front of people, and having that experience of the energy and excitement in the building.”

Whatever their allegiance, fans must cheer and boo with their masks on.