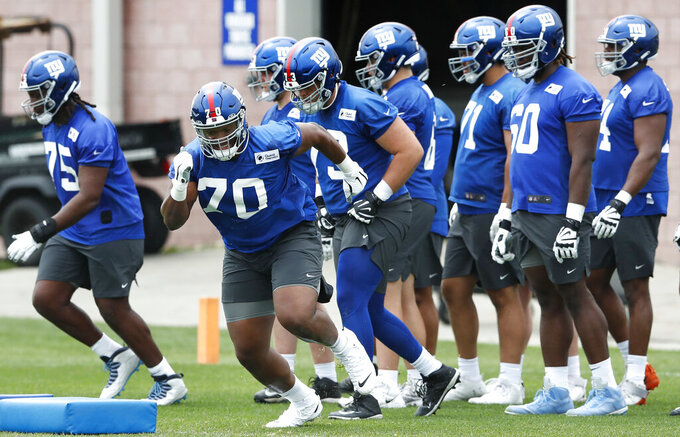 The Giants announced the signings Saturday after holding a rookie minicamp at their facility. All the draft picks attended the minicamp.

Thibodeaux had 123 tackles (82 solo), 35.5 tackles for loss, 19 sacks and three forced fumbles in three seasons in college. His best season was last year when he recorded a career-high 50 tackles, including 12 stops for loss and seven sacks.

McFadden made 31 starts for the Hoosiers and had 216 tackles, 37 tackles for loss, 14 sacks, four interceptions, eight passes defensed and three forced fumbles. He led Indiana in tackles in each of his last three seasons.

Davidson played in 37 games with 28 starts in four seasons for the Sun Devils. He recorded 137 tackles, 16.0 tackles for loss, five sacks and one fumble recovery.

McKethan played in 43 games at North Carolina, including 37 starts at right guard in his last 38 games.

Beavers played two seasons at Connecticut before transferring to play three years for his hometown Bearcats. He played in 62 games with 41 starts and started each of the 34 games in which he played for Cincinnati. He had 233 tackles, 14 sacks, six passes defensed, three forced fumbles and two fumble recoveries.