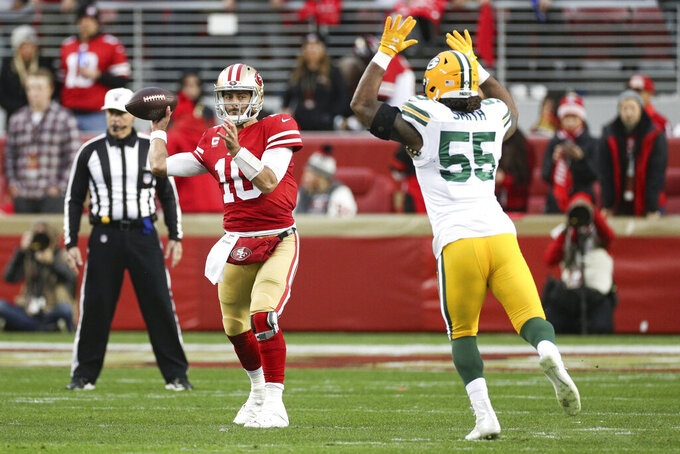 In LaFleur’s first season, the Packers went from 6-9-1 in 2018 to 13-3 and the NFC championship game this season as second-year coordinator Pettine improved the defense. ESPN first reported the decision this week to stick with him.

While the Packers were no better in total defense, ranking 18th in yards allowed in both 2018 and 2019, they were ninth-best in scoring (allowing 19.6 points per game) a year after giving up 25 to rank just No. 25.

From a scoring perspective, it was Green Bay’s best season since winning the Super Bowl in 2010.

The Packers were blown out 37-20 by the San Francisco 49ers in the NFC title game, giving up scores on the final five possessions of the first half to trail 27-0 at halftime. Raheem Mostert rushed for 220 yards, the second-most rushing yards in a playoff game in NFL history, and four touchdowns.

LaFleur afterward seemed to leave the door open to make a change.

“We’re still working through everything right now,” LaFleur said Wednesday. “I think our defense did a lot of great things. Obviously, the last game was very disappointing in terms of our performance. It just wasn’t good enough.”

The Packers retooled their defense during the offseason with three high-profile signings (outside linebackers Za’Darius Smith and Preston Smith and safety Adrian Amos) and two first-round draft picks (outside linebacker Rashan Gary and safety Darnell Savage). The Smiths combined for 25.5 sacks during the regular season and added four in a playoff victory over Seattle. Amos provided steady play and Savage was picked for the all-rookie team.

However, after losing 37-8 at San Francisco on Nov. 24, the defense disintegrated again with a trip to the Super Bowl on the line. With five runs of 18-plus yards, three of which went for touchdowns, the 49ers attempted only eight passes.

The performance as well as the effort irked LaFleur.

“I think it was a combination of a lot of things,” LaFleur said. “I just didn’t feel like we played with the same urgency, the same tenacity, the same toughness. You have an opportunity to go to play in a Super Bowl and for that to happen, it’s extremely bothersome. We have to look at ourselves, everybody. I’m going to look inside of myself and see why weren’t our players playing with their hair on fire. I think everybody in our organization has to do that.”