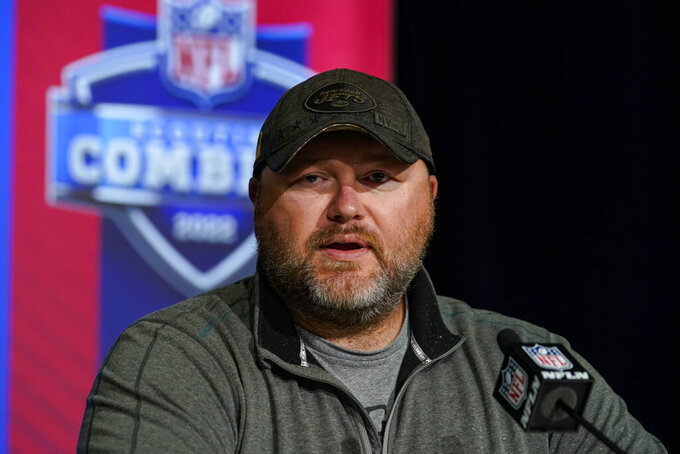 NEEDS: The Jets haven't made the playoffs in an NFL-worst 11 straight seasons and their latest rebuild is entering its second year with coach Robert Saleh. This will be a big offseason for GM Joe Douglas, who's in his third full year in charge. The roster has plenty of holes and needs, including at pass rusher, wide receiver, tight end, offensive line, linebacker, safety and cornerback. Douglas acknowledged he'll be aggressive while trying to set up Saleh with a much more competitive roster — and it starts with having lots of salary cap space for free agency. Some of the focus will be on whether the Jets bring back some key players from the last few seasons, including Maye. The safety received the franchise tag last year, but is coming off a torn Achilles tendon that ended his season early and is dealing with legal issues after his DUI arrest and car crash in February 2021. Douglas appeared to be lukewarm on bringing him back. Safeties Lamarcus Joyner and Will Parks will be back after re-signing. Crowder is likely headed elsewhere after leading the team in receptions the last three years and being a solid slot receiver. New York decided to bring back Braxton Berrios, who emerged as a playmaking piece in the offense and was selected an All-Pro as a kick returner. Moses and Duvernay-Tardif were solid starters on the right side of the line and the Jets might want to get some consistency in the personnel up front for second-year QB Zach Wilson. The defensive line could use some depth after Folorunso Fatukasi agreed to sign with Jacksonville.