Lock, Broncos run out of time for another comeback bid 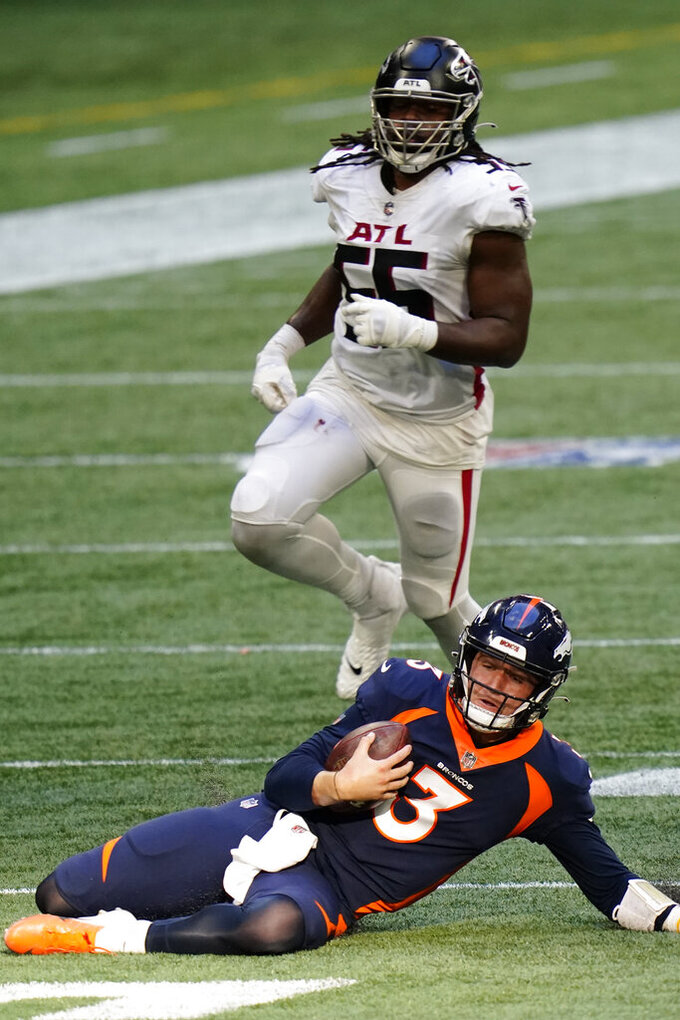 Denver Broncos quarterback Drew Lock (3) slides after a run against the Atlanta Falcons during the second half of an NFL football game, Sunday, Nov. 8, 2020, in Atlanta. (AP Photo/Brynn Anderson)

Lock came up just short in a 34-27 loss Sunday to the Atlanta Falcons after spending much of the first three quarters scrambling and throwing intermediary routes that failed to advance the chains.

His interception early in the fourth essentially ended Denver’s afternoon.

The Broncos (3-5) had won three of four and were coming off a 31-30 win over the Los Angeles Chargers that included three touchdown passes from Lock in the final period.

“Everybody wants to be known for something and we need to stop being known for coming back from three touchdowns in the fourth quarter,” Lock said. “We have to be better in the first three quarters.”

Lock, who completed 28 of 45 passes for 313 yards, didn’t go quietly. He connected with Jerry Jeudy on a 20-yard touchdown pass to trim the lead to 27-13 early in the fourth, but the next possession began with an interception by Ricardo Allen. Lock overthrew Jeudy, his intended target, and Allen returned the ball 20 yards to the Denver 12.

Two plays later, Todd Gurley ran in for a touchdown that made it 34-13 and put the game nearly out of reach.

“I promise I will throw that ball 10 times out of 10 to Jerry on that pick,” Lock said. “I tried to backpedal and that’s a throw I should make. We’ll get ’em next time.”

Lock’s 9-yard touchdown pass to Tim Patrick trimmed the lead to 34-20 with 3:53 remaining, and he found Jeudy on a 41-yarder down the left sideline that set Denver up at the Atlanta 14. Lock then ran for a 10-yard TD that made it 34-27 in the final two minutes, but that was as close as the Broncos could get.

Lock was responsible for three fourth-quarter TDs for the second straight week. He’s harping, however, on being more productive in the first half to keep from getting in too big of a hole.

“Some points need to be scored, that’s for sure,” Lock said. “Pick up a few first downs. We can’t be in third-and-longs. We did it again this week. We’ve got to be better in that regard. No magical potion for that to happen. It’s going to be work.”

Denver coach Vic Fangio blamed the defense for coming up short in the first half and letting the Falcons take a 20-3 lead at intermission.

“It’s hard to say right now,” Fangio said. “Our pass defense wasn’t good enough. That includes the pass rush, that includes me making the calls. We’ve got to get it fixed. We definitely have to get it remedied. When one side of the ball is struggling, the other side has to pick it up. We weren’t able to do that this week.”

“It was a struggle, obviously,” Fangio said. “I never did find the right combination in the first half. We had some good pressures. Our pass rush wasn’t good enough. They’re a really good offense.”