Lock driven by quotes from John Elway and Winston Churchill 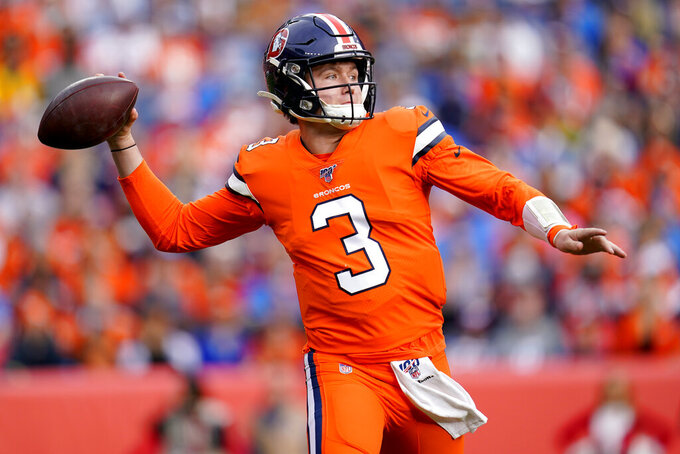 Denver Broncos quarterback Drew Lock (3) throws against the Detroit Lions during the first half of an NFL football game, Sunday, Dec. 22, 2019, in Denver. (AP Photo/Jack Dempsey)

ENGLEWOOD, Colo. (AP) — Two quotes inspired Drew Lock when he was sidelined with an injured right thumb last summer. One was from John Elway, the other from Sir Winston Churchill.

When Elway sat down with his rookie quarterback in late August to tell him he'd start the season on injured reserve, the Broncos general manager didn't reveal any plans to bring him back as soon as possible or leave him there all season, Lock said, "but right as I was leaving the room, he said, 'Just don't take this as a vacation year.'"

Lock, who has injected some excitement into the organization and its fans by winning three of his four starts and displaying a moxie and a mobility that's been missing in Denver for years, said that comment gave him hope that his rookie year wouldn't go to waste.

"I said, all right, there might be this sliver of hope, a sliver of a chance that I end up playing at the end of this year," Lock said.

Lock told The Associated Press in an interview Thursday that Elway's admonition drove him through his rehab and would pop up in his mind every time he felt like watching a little less film or hit snooze button for another 15 minutes of shut-eye.

"That stuck with me: 'Don't take this as a vacation year.'"

The other quote that stuck with the second-round draft pick from Missouri came from his mother, Laura Lock, who clipped out a Churchill quote, laminated it and presented it to her son as he left for his first training camp:

“To each there comes in their lifetime a special moment when they are figuratively tapped on the shoulder and offered the chance to do a very special thing, unique to them and fitted to their talents. What a tragedy if that moment finds them unprepared or unqualified for that which could have been their finest hour.”

Lock said he taped the quote to his bathroom mirror so he would see it every day, but he found a deeper meaning in it after he got hurt in the preseason.

“Really, it ended up speaking to me in a different way,” Lock said.

Lock returned to practice in November when Brandon Allen had replaced Joe Flacco, who went on IR with a neck injury after Week 8. Despite having just 10 practices, Lock took over against the Chargers in Week 11 and led the Broncos to a last-second victory in his debut.

Then he became the first quarterback in NFL history to throw for 300 yards and three touchdowns in his first road start. After a humbling loss in the snow at Kansas City, Lock bounced back to complete 25 of 33 passes Sunday in a comeback win over Detroit.

"Obviously you see arm talent and you see a young quarterback who's gaining confidence in the system. He's being asked to do more and more every week. He shows really good athleticism. His touch and his accuracy have been impressive and he's got our attention, no doubt. He's been impressive," Gruden said.

Lock ran a lot of different systems in college, so his early success in the NFL is no surprise to Gruden.

"He's not a novice by any stretch, he played for a lot of different coordinators and he got results in whatever system he was put in," Gruden said. "Heck, I got a chance to coach him in the Senior Bowl. He ran our stuff pretty darn good, too.

"He's a likable guy, No. 1. I think he's a very confident, likable young man — with talent. He's got a lot of charisma about him. I think the players like him. And I think the players enjoy playing for him because he's got some natural leadership and he enjoys playing."

That's high praise for a guy who didn't even know himself if he'd have to wait until 2020 to show his stuff.

“I had absolutely no idea what was going to happen" after going on IR, Lock said.

But he knew he'd be ready whenever his time came.

When Lock got hurt, some people figured missing several months of practices would prove detrimental to his development. Instead, Lock used the time away to take a step back and digest things at a slower pace, concentrate on his footwork and learn the playbook without the pressure of performing day in and day out.

"It was the exact opposite of what people thought," Lock said.

Lock also told his coaches not to fret about damaging his confidence by playing him too soon.

"We talked about how sometimes you throw a rookie in there, he gets the snot beat out of him, mentally he can get messed up," Lock said.

That wasn't him, he assured everyone.

"What I had to instill to the people upstairs and all the coaches is that when I go out there and if I get my ass kicked, I'm going to be all right," Lock said. "I've had my fair share of ass-kickings and I've also had my fair share of big wins to where I'm not going to get too high, I'm not going to get too low. If it is decided that you all put me out there, I'll be mentally and physically ready. I won't curl up in a ball."