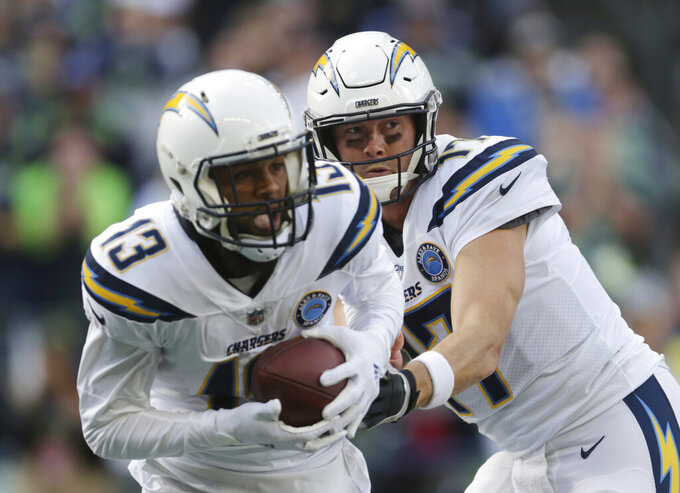 COSTA MESA, Calif. (AP) — Philip Rivers says the Los Angeles Chargers' potential reminds him of 2006 to 2009, when the franchise won four straight AFC West Division titles. That group, though, only made it as far as the AFC championship game in 2007.

Rivers is hoping to lead the Chargers one step further and to a Super Bowl berth for the first time since 1994. Los Angeles has emerged as one of the top teams in Anthony Lynn's third season as coach after tying for the most regular-season wins in the AFC last season (12) and winning a postseason game for the first time in five years.

Rivers remains optimistic in his 16th season despite another rough training camp. Running back Melvin Gordon is holding out for a contract extension, offensive tackle Russell Okung is recovering from blood clots, and safety Derwin James is out at least two months after having surgery on his right foot.

Rivers had one of his best seasons last year. His 105.5 passer rating equaled a career best from 2008 and 2013, and his 8.5 yards per attempt average was his best since 2010. His 68.3% completion rate also was the second best of his career. He has a talented receiving corps with Keenan Allen, Mike Williams and Travis Benjamin as well as getting back Hunter Henry, who missed the regular season with a knee injury.

The Chargers will have another tough start to the season with two of their first three games involving playoff teams from last season, but they won't face Kansas City for the first time until Nov. 18 in Mexico City. The two teams will also meet in the final week of the regular season.

"I think every year is a different year. Once we start playing real football games, we'll see exactly where we are. If you look at our schedule early on, we are going to be challenged," Lynn said.

He had five straight games of 120 or more scrimmage yards last season but also missed four games late in the regular season due to a knee injury. While Gordon's 38 TDs over the past three seasons are second in the league, his injury history and struggles by elite running backs after signing extensions, such as Arizona's David Johnson and the Rams' Todd Gurley, have made Gordon's attempts to negotiate precarious.

Rivers has voiced his support for Gordon, but also realizes that Austin Ekeler and Justin Jackson must be ready if Gordon does not report. Ekeler was Gordon's backup last season and scored six touchdowns (three each rushing and receiving), while Jackson had solid games against Pittsburgh and Kansas City.

"I think you want to always be as supportive as you can of your teammate. At the same time, you have to move forward with what you have to do to prepare for the opener and beyond. There's a balance there," Rivers said. "I know Melvin knows that I'm pulling for him. In saying that, that means you want what's best for him."

Even with Okung, the offensive line struggled late last season in pass protection. The Chargers allowed only 11 sacks in the first eight games, tied for fourth least in the league. But in a five-game stretch in late November and December, they gave up 17. Second-year tackle Trent Scott has been plagued by holding penalties during the preseason, and right tackle Sam Tevi tied for fifth among most sacks given up by an offensive tackle last season. Third-round pick Trey Pipkins has potential but needs time to develop. The Chargers are also hoping guard Forrest Lamp can finally break into the starting lineup after being hampered by injuries his first two seasons.

Defensive ends Melvin Ingram and Joey Bosa should team to give opposing offensive lines fits. Ingram led the club with seven sacks and Bosa was second with 5½ despite missing nine games due to turf toe.

Los Angeles drafted defensive tackle Jerry Tillery in the first round because of his ability to collapse the pocket up the middle The Chargers also signed 15-year veteran Thomas Davis after injuries decimated the linebacker position last season.

No one wanted to see James get injured, but safety is one of the positions where the Chargers could have an injury and withstand it.

Adrian Phillips will take over at free safety while James is sidelined. Rayshawn Jenkins is also a possibility to move over from strong safety, but second-round pick Nasir Adderley still is trying to work his way back from a hamstring injury.

Michael Badgley has finally provided the Chargers with something they have been sorely lacking for a long time: a competent kicker. The rookie from Miami was 15 of 16 on field goals, including a winning kick at Pittsburgh and a team-record 59-yarder against Cincinnati. With Badgley providing stability in the kicking game, Los Angeles could have one of the top special teams units in the AFC. Phillips was an All-Pro selection on special teams, while Desmond King and Travis Benjamin are threats in the return game.