Rams glad to be unbeaten despite ordinary offensive start 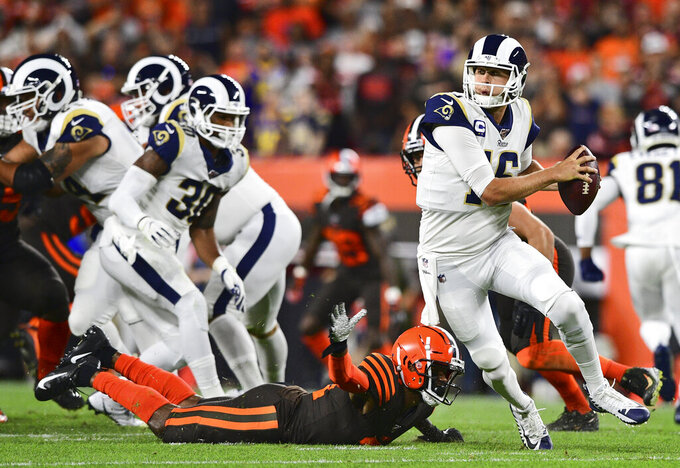 THOUSAND OAKS, Calif. (AP) — In production, in execution and in overall cleverness, Sean McVay's offense has been fairly ordinary during the first three games of his third season with the Los Angeles Rams.

Mere competence qualifies as a surprise for a team that tore up the NFL during the head coach's first two years with an offensive brilliance that stunned their opponents and inspired many imitators.

Because all three of their unspectacular offensive performances this season were still victories, the Rams (3-0) aren't certain any long-term problems are foreshadowed by their quiet start.

But with the embarrassment of their three-point Super Bowl performance still fresh in many players' minds , the Rams realize they'll probably have to get better soon to succeed in their NFC title defense, starting with two games in five days against Tampa Bay (1-2) and Seattle.

"For us internally, our standards are so high, especially offensively," quarterback Jared Goff said Wednesday. "We expect to be better, and we need to be if we want to win games late in the year. We've been fortunate enough to do enough to win these past three games, but we know that in certain games down the road, it won't be enough. We need to elevate that standard even further and continue to be detailed and be sharp on offense."

The Rams are 16th in the NFL with 357.7 yards per game after finishing second in the category last year, and their high-flying passing game is a pedestrian 22nd with 234 yards per game in the air. Los Angeles is still a respectable eighth in points after leading the NFL in 2017 and finishing second behind Kansas City last year with 527 points in the 12th highest-scoring season by any team in NFL history. But the Rams haven't yet topped 30 points this season after exceeding the mark 11 times in 16 regular season games last year.

Los Angeles isn't blowing anyone away this season partly because opponents have figured out a basic strategy to slow McVay's once-unstoppable offense. The first three defenses faced by the Rams this season have used variations of a scheme deploying six players at the line of scrimmage, thereby forcing the Rams out of the outside zone running plays that have been the foundation of their offense.

McVay's reflexive answer to any problem with the Rams is a swift and merciless denunciation of himself. When asked why the offense is starting so slowly in games, he immediately blamed his play-calling and his own work preparing his players, saying any detailed discussion of the reasons for the slow start would sound like a rationalization.

"Absolutely, I haven't done a good enough job for us," he said. "I think it starts with me. I like the way we've responded and been able to finish games out in the second half, but we expect to be sharper overall. If I do a better job, and then everybody else does a little bit better, we're hopeful that we'll see better results."

There are more tangible reasons, however: While nearly every skill player returned from last season, the line is very different. Los Angeles had three relatively untested starters at center and both guard spots last week, and opponents have noticed.

The Rams' reduced use of running back Todd Gurley has been the most glaring difference from their offense at its dominant peak. Gurley's snap count is down about 15% from last year, with Malcolm Brown getting more action in the backfield.

For roughly the thousandth time Wednesday, McVay denied the Rams are deliberately limiting Gurley's carries to keep him fresh or to manage the health of his knee. Still, Gurley's 44 carries are by far his fewest in the first three games of his five NFL seasons, and he ranks 18th in the league with 48 touches after finishing in the top five in each of the past three seasons.

After leading the league in yards from scrimmage in 2017 and finishing fourth last season, Gurley is 55th so far this year — and 20th among running backs — with 211 yards.

When asked what Gurley will need to get big numbers, McVay replied: "I think we have to have more plays. ... The more plays we get, the better it is for everybody."

The Rams are ninth in the league in snaps from scrimmage.

NOTES: RG Austin Blythe and TE Tyler Higbee returned to practice in a limited capacity. Both missed last week's game with injuries, but McVay is optimistic he'll have both veterans back this weekend.