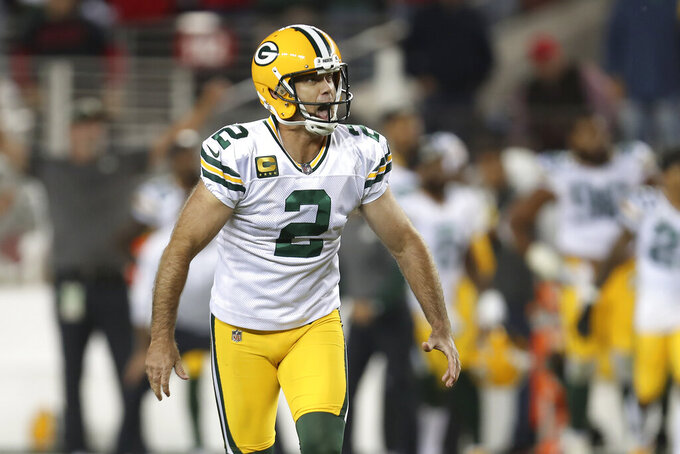 SANTA CLARA, Calif. (AP) — With only seconds to play and no timeouts, Aaron Rodgers had no doubt where he'd look to drive the Green Bay Packers to a game-winning kick.

Rodgers completed two deep passes to Davante Adams on a last-minute drive, setting up Mason Crosby’s 51-yard field goal on the final play of the game that gave the Packers a 30-28 victory over the San Francisco 49ers on Sunday night.

“My first thoughts in devising how I wanted to get us into field-goal range was how could I get 17 the ball,” Rodgers said.

Rodgers did it twice on passes of 25 and 17 yards to Adams after the Packers took over at their 25 with 37 seconds left and no timeouts following Jimmy Garoppolo’s 12-yard TD pass to Kyle Juszczyk.

Adams came back after taking a hard hit from Jimmie Ward that looked like it could knock him out of the game and finished with 12 catches for 132 yards.

“How can you not be romantic about football?” Rodgers said.

All that was left was for Crosby to make the kick and the Packers (2-1) to celebrate a win that came after they blew a 17-point lead.

“Celebrating with the guys in the end zone, seeing that energy and feeling that juice, is what it’s all about,” Crosby said. “And then carrying on into the locker room and guys pouring water all over my head and everybody, that’s what this game is all about. It was really special.”

The comeback spoiled the first game for the 49ers (2-1) with fans since beating Green Bay in the 2019 NFC title game. San Francisco had rallied from 17 points down to take the lead before getting crushed by Rodgers.

Rodgers threw for 261 yards and two touchdowns to lead the Packers to back-to-back wins after a season-opening 38-3 loss to New Orleans. Rodgers had six TD passes and no interceptions in wins over San Francisco (2-1) and Detroit.

“I feel good about our team," Rodgers said. "Week One was an anomaly. I said that and I believe that. We bounced back Week Two. Played a great team tonight right down to the wire. This plane ride is going to feel incredible.”

The Niners returned home following back-to-back road wins back East but struggled to slow down Rodgers.

“There were some great individual efforts of guys just making unbelievable plays that got us in and gave us a chance to win that game,” coach Kyle Shanahan said. “But some mistakes that we made throughout the game, you don’t win a lot of football doing that. That’s what we’ve got to clean up.”

Rodgers connected on a 1-yard TD pass to Adams and a 12-yarder in the fourth quarter to Marquez Valdes-Scantling to help stake the Packers to the lead.

They made it 27-21 when Garoppolo inexplicably threw the ball to the ground behind him while trying to avoid a sack by Kenny Clark that set up a field goal by Crosby.

Garoppolo responded with the TD drive but it wasn't enough.

“There's always too much time on the clock if there’s ever time on the clock, especially with Aaron Rodgers,” tight end George Kittle said. “I think we have a really good defense. I don’t really have any worries when our defense is out on the field. But it’s Aaron Rodgers and Davante Adams over there. They did what they had to do to win.”

The Packers got off to a fast start with scores on their first two drives. Rodgers connected on a 42-yard pass to Allen Lazard on the first drive to set up a field goal by Mason Crosby. Rodgers then hit Valdes-Scantling on a 47-yarder to set up the short TD pass to Adams. Rodgers was 9 for 9 for 127 yards in the quarter.

The Niners avoided being shut out in the first half when they scored on the final play. After Garoppolo got away with an apparent intentional grounding that would have ended the half, Lance came in for his first snap since the opener. He ran behind a big block from Trent Williams for a 1-yard score that cut Green Bay's lead to 17-7.

Packers coach Matt LaFleur was angry about the lack of the intentional grounding call and gave referee Jerome Boger an earful on his way off the field.

San Francisco then scored on the opening possession of the second half when Garoppolo hit Brandon Aiyuk on an 8-yard TD pass as the Niners scored 14 points without Rodgers touching the ball.

Packers: Adams was down for a few minutes after taking a hard hit from Jimmie Ward that didn't lead to a penalty. His teammates kneeled near him as he was being treated but he was able to return after missing only one play. ... LB Krys Barnes left the game in the first half with a concussion. ... DL Tyler Lancaster was evaluated for a concussion in the second half.

49ers: CBs K'Waun Williams (calf) and Josh Norman (chest) left the game in the first half.